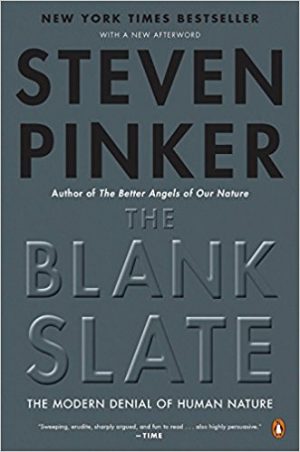 What makes a man a man? What drives our behavior? What makes us us? These are the questions that Steven Pinker tries to answer in The Blank Slate: The Modern Denial of Human Nature. The answers are surprisingly entangled in religion and our belief in our own free will. The book, when it was originally released, was labeled “controversial.” In other words, Pinker challenged the status quo. What we believe intuitively or through faith didn’t mesh with his decomposition and recompositing of the discoveries of science. This review will be broken into two parts: the first where we cover the basics of The Blank Slate, and the second where I talk about the implications.

The Heart of Human Nature

The Blank Slate is in service of understanding human nature better, how we and our fellow humans make our decisions, and how we grow to be a service to our society. Some authors who have tackled this topic have broken the mind down into lower- and higher-level functions – like Kahneman in Thinking, Fast and Slow. Others have looked at the problem with metaphors such as the Rider-Elephant-Path model as written in Haidt’s The Happiness Hypothesis. Haidt follows up The Happiness Hypothesis with The Righteous Mind, where he seeks to uncover the fundamental sources from which I morality arises.

Others, like Greenleaf in Servant Leadership and Scharmer in Theory U, seek to nudge human nature in a better direction. Without trying to explain how we came to be the people we are, they propose a different way of thinking.

Instead of hypothetical models of how we operate, Pinker explores two historical perspectives on how humans evolved and how our brain works before systemically walking through the research and the implications. The first of the three historic views of human nature is that we’re a blank slate, and we’re shaped entirely by our environment. The second view is that we’re all noble savages who are altruistic at our core. The discovery of seemingly peaceful native tribes led to the belief that we’re corrupted by our society. The third view is that there’s a ghost in the machine. That is, there’s a soul that inhabits our bodies and frees us from the bonds of biology. The blank slate is first.

Before we understood genetics to the level we do today, we knew that everything about a person couldn’t be encoded into our genes. This gave rise to the idea that the brain was a blank slate, a new computer with nothing loaded. Through our experiences, we became who we are. Some of this was the environments that we surrounded ourselves with and some of it was the choices we made.

However, the blank slate is not supported by research. It seems that there’s something in our genes that influences who we are.

The Dalai Lama and Daniel Goleman had a conversation recorded in Destructive Emotions where they considered whether humans were rational egoists, selfish and compassionate, or compassionate and selfish. There was no answer to this puzzle, only three different views. This captures the heart of the noble savage. Some believe that we’re generally peaceful creatures who are perverted by our environment in ways that lead us to selfishness and narcissism.

The very idea of a noble savage was disproved. As the study into the cultures that were initially thought to be peaceful was deepened, it became more apparent that the conflict between people and peoples exists everywhere. Conflict, in fact, exists in all of nature, up to and including humans.

However, it’s a convenient and comforting belief that we can blame our infirmities and weaknesses on our environment.

The Ghost in the Machine

The ghost in the machine is our soul. It’s the timeless, endless, undying part of ourselves that continues after this life. (See Soul Keeping for an attempt at defining what the soul is.) The ghost in the machine is a healthy buttress against nihilism and the belief that our lives are without purpose. If we live and we die but leave nothing behind, then what’s the point? Why would we care if we add to society or take from it?

The idea that we have an immortal soul serves to continue to press into the service of humanity. Whether it’s the Jewish and Christian belief in heaven, or a belief in reincarnation where you get to come back as a higher form of animal, most religious institutions believe in the ghost in the machine and use this belief to drive forward progress of the species.

Genes Turning On and Off

What we’ve learned through our study of genetics is that gene sequences can be turned on and off. That is, our environment and our internal thinking literally changes our genes. This makes it difficult to isolate a single factor as the cause of a condition. We live in a probabilistic world, where the presence of a gene only indicates a change in possibility for a condition – not a certainty that it will or won’t appear.

Why Zebras Don’t Get Ulcers spends considerable time explaining how we can transmit stresses across generational lines without the direct expression of genes.

Humans are – in essence – a machine like any other. They’re like a complex clock, whose function and operation can be determined through a detailed understanding of the component parts. This is a scary proposition for those who hold dear the idea that our bodies are just temporary containers for our soul. If we can reduce everything to chemical reactions, then where do we have room left for us to have a soul.

This is a common concern. In Mindreading, much of the criticism against mental models was leveled because of tendency to decompose the magic of the mind into a set of constituent components with sufficiently limited complexity to be understood how we might model them. The more we can peer into the depths of how the mental machinery works, the less mystery there is.

Perhaps equally scary is the idea that, if we’re a biological clockwork, we should start with the best clocks to begin with. We shouldn’t take care of the weak or inferior, we should end their lives move on to moving the species forward. This was the heart of the Nazi attempted genocide of the Jewish people. As scary as it is, this is not the first nor last attempted genocide in history.

If it makes sense to end lives that are not adding value to society, shouldn’t we also only allow those to breed who have superior genes and therefore represent a better clock? This is the idea of eugenics, which seeks to deny reproductive capacity to those who were deemed inferior. In Indiana, we had eugenics laws from 1907 for about 70 years, sterilizing 2,500 people. These laws are long off the books but represent a time when Francis Galton, who was Darwin’s cousin, had substantial influence on the policies and thoughts of the leaders of the state.

The pendulum swung from the blank slate to everything is programmed in our genes and weaker genes should be prevented from replicating.

Battle of the Sexes: Animal Kingdom

If you’re going to work your way through evolutionary biology to get to the impact of passing genetic code on through procreation, you’re going to get to sex and how the two sexes view the act. With mammals, the difference is striking. Males have very little energy expended in the reproductive act. While the actual sexual act may be more physical exertion for the male, the actual act of raising children is substantially more burdensome for the female, who, in most species, takes primary responsibility for raising the young that she carries.

From a sheer glucose management point of view, the female is substantially more involved in the reproductive act and therefore must be choosier with whom she mates. She should make the right choice, because her choices are going to be very large bets on the scales of life. Mating with the right male can give her children an advantage. Mating with the wrong male can reduce the chances of her offspring making it and the survival of her genetic code.

In a world without effective contraception, the biological desire for sex and the love of children is enough to support the propagation of genes. In the world of contraception, we’ve got things turned around a bit. Thoughtful intellectuals leverage their greater self-control and more consistently use contraception to prevent unwanted pregnancies, while those with less self-control are not using contraception and get pregnant at much higher rates. This means we may have stalled or reversed the impacts of natural selection.

When well-reasoned people aren’t reproducing as fast as folks who cause burdens on the social systems, it’s not hard to see how someone might consider the eugenics laws – even if they aren’t appropriate.

In the raging battle of whether our personalities are driven by genetics, the environment, or both, the answer seems to be a qualified both. The qualification is that the environment as we think of it – “they came from a good home” – seems to have less impact than we believe. We have genetics setting the development process on a path, but it seems that the path can be influenced.

Personally, I believe it has to do with random openings of receptiveness. That is, I believe there are times when we’re more susceptible to input and learning and times when we’re not open to learning from our experiences. So, something that may be impactful to one person might not be impactful to the person standing next to them. Unfortunately, saying that people have periods of open and closed time for learning does nothing to illuminate the situation until you can define, describe, or detect those times.

Neural plasticity is a popular term. It refers to the idea that our brains aren’t fixed and then remain unchanged through our adult lives. D.O. Hebb said, “neurons that fire together wire together; neurons out of synch fail to link.” In truth, neurons form connections to other neurons based on the firing pattern – which is driven by both internal processing and sensory input. As we gain new experiences, or we sit and meditate, we generate new connections that didn’t exist before.

We learn and grow – that is, we grow new neural connections that allow unrelated concepts to become linked and go together. The way that we learn really does shape our mind. It shapes the internal structure.

Every generation – over the last several at least – believes that society is going downhill. They believe that the world is “going to hell in a handbasket.” However, it’s not clear whether that’s literal truth, or whether we’re just getting more negative news than we used to. When something awful happened beyond the scope of our community, we never used to hear about it. Now, with traditional and social media sharing and amplifying bad events, it’s certainly possible to believe that the world is getting worse.

However, what the media doesn’t share are the thousands of small kindnesses that are done every day. This is what Gould calls “The Great Asymmetry.” We do thousands of small “goods,” and they’re balanced out by a few truly heinous acts. Humans have the capacity for great love and kindness as well as discouraging evil and harm.

What’s It All Mean?

So much for our conceptions of how we think and how we should hold people accountable. In Part 2 of this review, I walk through some of the implications of our minds not being The Blank Slate.