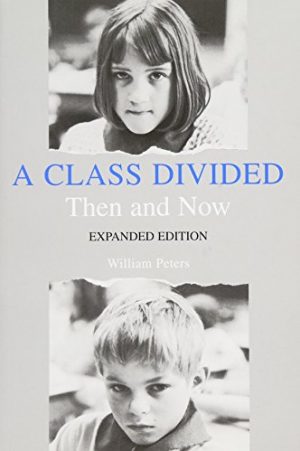 It all started the night of April 4th, 1968.  Jane Elliott was preparing for her next day’s lessons when she heard of Dr. King’s assassination.  Dr. Martin Luther King, Jr. had been fatally shot by James Earl Ray on a balcony in Memphis, TN.  It shook Elliott to her core as she sat on the floor working on the teepee for the next day’s lesson.  She decided that she’d design an exercise for her class that would help them understand how discrimination was wrong.  In A Class Divided: Then and Now, William Peters explores the results of the exercise when it was performed and the lasting effect it had on her classes.

Peters was a producer for ABC and developed a documentary that demonstrated the impact on a class – not the first class, which she had done in 1968, but her 1970 class, after Elliott’s work became more well known.  The Eye of the Storm was released in 1970 and became a teaching tool for generations.  Peters and Elliott reunited with many of the class from the documentary and released an episode of the series Frontline: “A Class Divided.”  This 1985 episode received a number of awards as well.

Peters’ role was that of an amplifier.  He was the storyteller that ensured the world was able to see the starting transformation that Elliott saw.

I won’t pretend to completely understand racism either in the 1960s and 1970s or today.  I’m not qualified.  It is, however, important to expose the prevailing – incorrect – beliefs of the time.  It’s necessary to expose the undercurrent that was not always stated – but was sometimes shouted.  It was believed that Black Americans were inferior, sub-human, and dumb.  These stated and unstated beliefs permeated the atmosphere, challenging the self-confidence that everyone deserves.  It extracted a heavy psychic toll on those on whom it was foisted.

As Elliott knew, and her class learned, that sometimes it is the tail wagging the dog.  Sometimes the expectations become reality.  It’s an established psychological fact today that people will perform at the level of the expectations and labels placed upon them (and that they accept), but in the 1960s, that research didn’t exist.  What they learned was that it’s possible (and is truth) that they’re just like you and me, but the circumstances they were placed in – slavery and decades of Jim Crow Laws – had pushed them in ways that no one understood.

For the children of Riceville, Iowa, racism was invisible.  In a mostly white community, most children rarely ran into Black people.  They heard their parents and the townsfolk speak of Black Americans and their inferiority, but it was just something they accepted since they had no – or little – experience.  Strangely, even as two Black members of the production crew set up for the recording, the children barely noticed.

Even in a community where there were very few Black people, the prejudice and discrimination remained.  It lurked just beneath the surface.

Elliott divided her class between those who had brown eyes and those who didn’t (so, blue, green, or hazel eyes), because it created a distinguishable split in the class.  On the first day, she’d tell the brown-eyed children they were superior, and the others were inferior.  On the next class day, she’d reverse it, saying that the brown-eyed children were inferior.  The children knew at the start of the exercise that this would be the case.

As expected, the superior group began to treat the inferior group poorly – even knowing the tables would be turned the next class day.

Elliott explains that she had a great deal of difficulty with the exercise, because it required her to tell her students something she knew was wrong, and she came face-to-face with the kind of discrimination that she wanted to stop.  As it turned out, April 5th, 1968, was a Friday, and that meant the next class day was a weekend, so she dreaded the second half of the exercise all weekend.

After the initial success and seeing how the children learned from the exercise, she still hated the exercise but continued it because the learning was so powerful and so necessary.  The children, in the space of two days, learned how it felt to be discriminated against – and therefore why it was wrong.

The Start of Expectations

What Elliott saw in her classroom was startling.  Not just the discrimination but also how the performance of her children shifted dramatically during the exercise.  When children were in the inferior role, they performed less well.  Since then, numerous studies have confirmed that when people take tests, they tend to conform to the stereotypes that they identify with.  If you’re an Asian woman who is nudged to embrace your Asian heritage, you’ll do better on a math test than normal.  If, conversely, you’re encouraged to focus on your gender, you’ll do less well.  When people are encouraged to embrace any stereotype, their performance will drift in that direction.

The key to this is that the influence is both external and internal.  It’s not that people need to be told they’re inferior or that they’ll do poorly – they’ve already internalized it, and all it takes is an activation, which can come subtly and unintentionally.  Changing the stereotypes is important for the external signs as well as the internal impacts.

The problem this exposes is that the evil that Zimbardo unleashed in the Stanford Prison Experiment and documented in The Lucifer Effect is inside of all of us.  Our willingness to accept discrimination is the first step on what Bandura called Moral Disengagement.  It’s the first step to the atrocities and genocides that we continue to see in the world.  First, make them different – or observe the differences rather than the similarities.  Second, make them less human, less worthy.  From this, you get the evils of the world, not just A Class Divided.