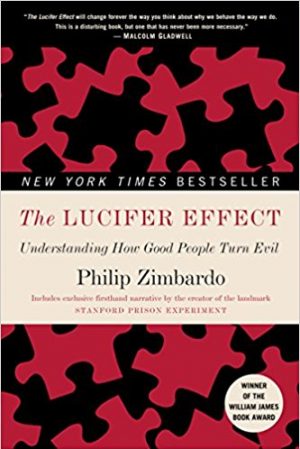 The Lucifer Effect: Understanding How Good People Turn Evil left me with a terrifying thought. What if we are all evil? What if we don’t turn people evil? What if, instead, we’re all evil and only briefly rise to be good?

This is the third and final post on The Lucifer Effect. The first post was The Devil Made Me Do It, and the second was Constructing a Prison.

Let’s look at the evidence. The kids in the Stanford Prison Experiment (SPE) were normal, healthy, moderately affluent kids. Milgram’s shock experiments were done with a random cross section of people. (See Mistakes Were Made (But Not by Me) for more on Milgram.) Asch’s perception experiments were likewise randomized. (See Unthink for more on Asch.) Despite study controls for normalcy, we found the capacity to warp our perceptions and cause harm with relatively little brainwashing.

If we take a step back from research, and we instead review actual events and the analysis of the aftermath, we see that here, too, we find normal. Adolf Eichmann was responsible for managing the deportation of Jews to concentration camps. His trial in 1961 was a spectacle. It was set on the world stage. Eichmann considered himself not guilty of the atrocities that he had committed. One would think that he was delusional. He clearly had worked diligently to lead so many Jews to their death, and yet he claimed that he had no special role. He was doing what was required of him.

“Delusional” is a word that could be used to describe the situation. The problem is that the psychology of Eichmann wasn’t the delusional sort. The problem was, in fact, that his psychological workup found a normal man. It didn’t find a monster. The problem for all of us is that he “wasn’t a bad guy.” He was just a guy swept up into a very bad system.

The line between good and evil seems bright and hard to miss. The line between the good guys and the bad guys was as easy to tell as the white hats the good guys wore and the black hats the bad guys wore in old movies. It should be simple. Right is right. Wrong is wrong. The problem is it’s not that simple. The problem is, time after time, we find that good people and bad people are most often separated by time, not distance. The problem is that the same person – each of us – is both good and bad. We are neither saint or sinner, we’re both.

Bandura in Moral Disengagement explains how the high and mighty fall to the depths of depravity and harm to one another. Mistakes Were Made (But Not by Me) explains how we can acknowledge our faults and assign the blame to others. Change or Die speaks about the discrepancy between what we know we need to change and why we don’t – the same schism between truth and perception that fuels our inhumane treatment of others.

We’re not a lost cause. We’re not relegated to the immoral behavior and split identity of Dr. Jekyll and Mr. Hyde. On the one hand, we cannot deny our nature. We cannot deny that we have the capacity for both good and evil. However, on the other hand, we must accept that we need to cultivate the kind of mental states that make us more resistant to the fall into the abyss of evil. We can cultivate compassion (see The Dalai Lama’s Big Book of Happiness for more). The fall into evil is precipitated by the dehumanization of others. Compassion seeks to anchor all people as innately human and always worthy of our concern.

We can guard against our beliefs that the ends justify the means. That our actions are noble, honorable, and right – even if people are harmed or killed by them. We must accept that whatever good may come from the end, the harm comes now and disproportionally.

We all have the capacity for evil within us. Our grander notions of ourselves are able to keep this evil away from our interactions with others most of the time – some more than others. We must accept that, in some circumstances, our natural fight of the evil within us becomes weary and tenuous. We must keep from getting caught up in The Lucifer Effect.