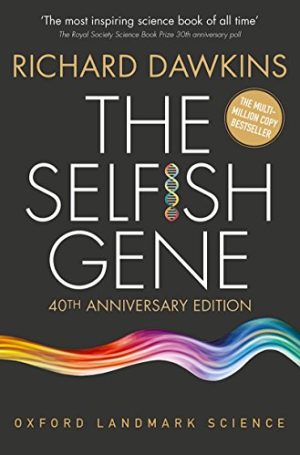 It all started with memes.  I wanted to know the origin.  I wanted to understand how they start, how they function, and how to generate them.  I discovered that the root was The Selfish Gene – and memes were conceived as the ideological counterpart to genes.  The book is long in the tooth yet as important to understanding evolution today as it ever was.  It explains not just the simplicity of selfishness but also how altruism can appear as a complex solution to the simple replication problem.

The most basic start of life, it is presumed, began with molecules that could convert raw materials into copies of themselves.  Ultimately, they’d consume all of the molecules that existed in their environment, and they’d have to evolve to more and more complexity to continue to replicate themselves.  In the process of competing to be able to replicate themselves, these mini-factories developed into the sequences that we today call genes.

The language throughout most of The Selfish Gene is intentionally open.  Dawkins is clear that his perspective is that a gene is a minimally sufficient unit to replicate.  It ignores the number of molecular sequences necessary to constitute a gene and instead focuses on the replication behavior.  This is convenient, since it allows for combinations of molecules in ways that say a gene can be of arbitrary length if it’s capable of replication.

Those that win in the replication game are those that can replicate the most – and beat out competitors of the raw materials.  There’s not intent or complexity, it’s just whatever can make the most copies wins.  The complexity only arrives when we discover the methods that the genes use to ensure their success – particularly in competition with others.

The Evolution of Cooperation

In The Evolution of Cooperation, Robert Axelrod explains the results of the game theory simulation work that he did.  He pitted programs against one another in a game of “The Prisoner’s Dilemma.”  The short of the game is that two robbers are caught by the police.  If both stay silent, they’ll each get three years.  If one defects, they’ll get only one year, while the other person gets five.  If they both defect and sell out the other, then they’ll both get five years.  The best selfish strategy is to always defect – if the other person doesn’t.  The best strategy for both parties is to not defect.  This simple setup allows for several strategies for determining whether the other person will defect and therefore what your best strategy should be.

This is the rise of complexity: predicting what others will do – or, more simply, adapting to the environment in which you find yourself.  The better you can detect what your competitor replicators are doing, the greater your probability of beating them out for precious resources.

Our sexual reproduction is just one of many strategies that have evolved by the genes that are cheating by offering a little less to the combination than they should.  Sexual reproduction involves the shuffling of genes through two parents.  Each provides half of the genes, and this constant shuffling leads to a lot of variation of gene combinations, so that genes can work together to ensure their replication.  Research on bees has shown that genes do, in fact, work together for their replication, with two separate genes being required to uncap and throw out infected grubs which collectively benefits the hive.

While it seems like there would be disadvantages to mixing genes through sexual reproduction, the benefits of being able to work with other genes quite obviously has some advantages too.

When it comes to sexual reproduction, there are cheaters – and they’re called males.  In my review of Anatomy of Love, I explained that men chase and women choose.  Dawkins lays out why that may have happened.  Assume that that the replication started with two replicators contributing equally to the offspring using sexual cells – gametes.  It would be beneficial for one to skimp a bit on resources while seeking out other gametes that were slightly larger, thus allowing the other parent to invest more in the reproductive process.  This could progress to the point where one produced many small gametes – sperm – and the other to produce fewer, larger, gametes that we’d call eggs.

From the moment of conception, then, females have invested more in the reproductive process than the males, and therefore they need to be choosier about with whom they mate.  It’s wise for a female to pick a male who she believes will be supportive through raising an offspring even if they didn’t invest as much initially.

Cheating evolves at a second level, when females pair with dependable males, making them believe that the offspring are theirs while secretly copulating with other males, who may have other desirable characteristics.  Similarly, males who can convince females that they’ll support the offspring but instead abandon them for another will have an evolutionary advantage.  For every action, there’s a counter action.

It’s an odd response until you realize that it would be necessary to prevent cheaters from taking over the replication game.

The Value of Groups

The Righteous Mind suggested that we became the dominant biomass on the planet due to our ability to have a theory of mind for other humans.  (See also Mindreading.)  This allowed us to work together and conveyed an advantage over animals that had to work on their own – or at least those with less ability to anticipate or predict the other animals’ movements.  Humans as a race are relatively frail.  However, our ability to cooperate conveyed more advantage than fur or tooth.  We live in groups because it is better for us to depend upon one another.

Social insects are a bit different in their composition.  They essentially divide into the bearers (of genes) and the carriers (of those who transmit the genes).  In other words, very few of the insects replicate genes, with most of the population running the factory that cranks out copies of these genes.  In effect, they’ve got their own slave labor built in, with workers blindly working towards the goal of replicating the genes of the queen.  This group arrangement serves all in the context of replicating their genes.

Memes are a thought or idea that replicates.  They replicate from one brain to another through imitation.  Memes survive in the same way that genes do: competing against rivals, their longevity, the ability to replicate, and the fidelity with which they are imitated.  Much like the early proteins that replicated in the primordial soup, there’s little indication of which ideas will replicate and which ones will not – and even more than that, which ones will remain over the course of years or decades.  Repetition and other factors increase the chances of a meme remaining.  (See The Hidden Persuaders for more.)

Many boomers and Gen-X remember the jingles and tag lines from the commercials of their youth.  Simple sayings like, “When it rains it pours,” (Morton Salt) and “Where’s the beef?” (Wendy’s) are stuck in our minds and periodically find themselves being reused and adapted.

In our social media world, we find memes that quickly come and go.  Very few memes have staying power, though some resurface from time to time.

Immortality Through Genes and Memes

Let’s face it.  Our bodies will die.  No one will live forever.  What we leave behind in this world are our genes – through our offspring – and our memes – that is, our ideas.  While genes have been the dominant replicators on the planet, they eventually seem to die out.  They may die out faster than ideas.  After four generations, someone has only 1/32nd of the genes from one of their ancestors (on average).  After a few more generations, the genes will be diluted even further, eventually potentially extinguishing all the genes from a particular ancestor.

Conversely, some ideas seem to persist.  Consider Socrates, Aristotle, and Plato from Greece.  What about Shakespeare and Yeats from England?  Some ideas greatly outlive the people who create them – and that’s why memes may ultimately become the dominant replicator on the planet.

We tend to think that our genes are pure representations of one animal – even the human animal.  What we rarely consider is how virus may be a separation of a gene or that a virus might integrate new genetic material into our genes.  We tend to think in terms of purity, but what if the actual combinations include parasites and viruses as a part of the evolutionary process?  If a parasite replicates as a part of the normal reproductive cycle of the host, how long will it be before the parasitic genes eventually become incorporated into the host?  There’s no definitive answer to this question, but it seems like eventually the two will become one.

Maybe one day our memes will be able to regenerate our genes, and it will come full circle.  Maybe we’ll realize the true power of The Selfish Gene.