Advice Not Given: A Guide to Getting Over Yourself 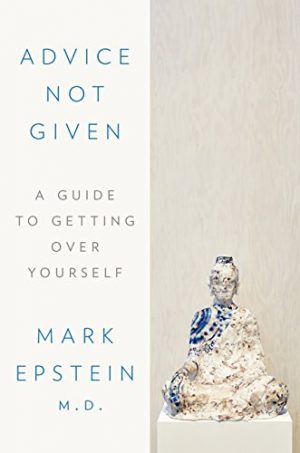 I didn’t really intend to spend so much time investigating Buddhism. Mark Epstein was recommended reading for me as I tried to integrate Western thoughts on positive attachment and Buddhist beliefs that attachment is the root of suffering. As I read Advice Not Given: A Guide to Getting Over Yourself, I began to see how both traditional Western psychotherapy and Buddhism revolve around finding a way to align our thoughts with reality. It’s not that we don’t need ego, and that it should be crushed or destroyed – nor does it mean that we should necessarily inflate it to be bigger than it should be.

In The Trauma of Everyday Life, Epstein looks at a few small components of Buddhism centered around the concept that life is suffering. In Advice Not Given he walks, chapter-by-chapter, through the Eightfold Path, introducing the traditional thinking and integrating Western psychology. However, he starts by framing the primary work of the path: our ego.

It’s the one affliction that we all have in common. We all have egos. We’re constantly tending to the size and shape of our ego – or it’s running amuck and causing havoc to us and to others in our lives. Unrestrained, the ego implores us to be bigger, better, stronger, richer, more attractive and more. The result is a constant nagging fear that we won’t be enough. It’s a self-doubt that is hard to shake. (See I Thought It Was Just Me (But It Isn’t) for more on being enough.)

Conversely, some degenerate the ego and believe that it’s bad. John Dixon in Humilitas says, “One of the failings of contemporary Western culture is to confuse conviction with arrogance.” That is, those whose ego is sufficient to operate with conviction are confused with those whose ego is out of control. (See The Wisdom of Not Invented Here for a collected set of ego references.)

A Hunger for Healing quotes a Zen (Buddhist) saying: “After enlightenment, draw water, chop wood.” Advice Not Given repeats this as, “after ecstasy, it is said, comes the laundry.” That is that while the Eightfold Path – and all self-reflection may lead to enlightenment– it doesn’t alleviate our need to be in the world and attend to our material needs and duties. After all, enlightenment (or awaking) doesn’t make the ego disappear, it changes our relationship to it.

The Eightfold Path to enlightenment is:

Before looking at each component, it’s important to pause and address the use of the word “right.” Epstein makes a point that the word doesn’t have to be translated to right as in “correct.” The original word could also mean “realistic” or “complete.” Epstein shares that he thinks of it as balanced, attuned, or fitting. This is important, because there’s no one “right” way to walk the path. There is a way of walking the path that is balanced or attuned to you, your needs, and the needs of the world around you.

Let’s walk the path as Epstein did.

Accepting reality as it is – not as we want it to be – is hard. It is, however, necessary to be in harmony with it. The right view has us constantly seeking to accept reality for what it is. The Serenity Prayer includes, “Taking, as Jesus did, This sinful world as it is, Not as I would have it.”

Too often, we see something unpleasant or discomforting, and we turn away from it. We seek to avoid the suffering of this life and only make it double. Right view isn’t eliminating suffering, but it’s changing how we approach it, so that it’s no larger and no smaller than it should be. It’s recognizing that both happiness and suffering – and everything else – is temporary. We don’t need to grasp onto it too tightly.

We all have unconscious desires that drive us. Right motivation suggests that we don’t have to be at the mercy of our neuroses. By shining light into the dark places of our soul, we can come to know them – and address them in healthier ways. We must, of course, admit that the dark places exist. We must accept that there are parts of ourselves that we don’t yet know and some that we may not like.

Motivation also means a balance between the need to develop wisdom and the need to cultivate compassion. Epstein recounts more than one situation where a hermit was admonished for not living in the world. Buddha made a point of having his monks go out into the community each day to keep them connected to the world and realize that they weren’t above or apart from the rest of the world.

Traditionally, right speech is about refraining from harmful talk, like lying, gossip, and such. However, it can have a deeper meaning about not just the talk that we share outwardly with others but also with the talk whispered under our breath and our self-talk. If people heard what we say to ourselves about ourselves, they would be appalled. We speak to ourselves in such a compassionless and unfair way – and we continue to allow it.

Right speech leads us to pay attention to the space between thought and action to create more space and give us greater opportunity to intervene before harmful words or actions occur. Sometimes that intervention is to prevent us from adding more meaning than is there. (See Choice Theory and Argyris’ Ladder of Inference for more on how we add meaning.) Sometimes that intervention is to assess whether what we’re thinking is just a thought or whether it is reality. Too often, we believe that we know reality, when we’re just making a series of assumptions.

We can create a space where we’re open, accepting, and inquisitive about our inner lives and the inner lives of others. In this space, we can process our thoughts and emotions, comparing them with reality and enabling us to prevent past hurts from being borne out into the future.

Right action is about not acting destructively. This means many of the things that make God’s top ten list (also known as the Ten Commandments): killing, stealing, etc. It also includes things like excessive drinking, which didn’t make God’s top ten list but are addressed in the Bible. It’s important to recognize, as the Dalai Lama has pointed out, that all religions fundamentally operate in the same direction – towards love. (See The Book of Joy for more.)

Much of right action could be compared to The Marshmallow Test. It’s denying our selfish, immediate needs in the service of greater rewards in the future. It’s difficult to delay our gratification and be willing to confront difficult decisions when they don’t fit with our previously established ideas or vows.

We have to live in the world – even when what is happening to us in the world isn’t what we planned. If our lives aren’t going along the script that we had planned, we have to accept that and only take the actions that we can to move us forward – without an attempt to overcontrol things.

Everyone has to make a living –but you don’t have to do it in a way that is deceitful or exploitative. The heart of right livelihood is finding a way to live which enriches your life – and the life of others. Making money is necessary. However, making money while preying on others isn’t.

The middle way – neither living in self-denial or indulgent materialism – is what right effort is about. It reflects the nature of life where both extremes on a continuum are bad. Only a middle path balances discipline and love. Children, as Donald Winnicott noted, need “good enough” parenting that doesn’t over indulge nor neglect the child for them to develop normally. Children need challenges, but, at the same time, they need to know that they’re supported.

Mindfulness is a bit of a misnomer. The word used is sati – which means “remembering.” When we’re being mindful, we’re remembering to pay attention to the world – and ourselves. Mindfulness isn’t anything special or additional that must be done. It’s not something that’s done only in the midst of meditation. Mindfulness is a way of viewing things where you keep an eye on your own mental processes.

In the learning and education space, it’s called “metacognitive.” In the Buddhist context, it’s keeping a distant eye on the processing that’s happening, so that we’re more aware of it.

In terms of teaching, concentration is typically taught before mindfulness, because it’s useful in the process of trying to be mindful. In truth, we’re not taught how to concentrate in our schools or societies. Though concentration is a powerful force – like how focusing light makes a laser that can cut metal – it’s not something that most folks know how to do.

Together, these ideas are the path towards enlightenment. However, even those on the path may find that they are buffeted by the waves of uncertainty and change. If you’re trying to find peace, Advice Not Given counsels, it’s important to remember that the waves are a part of the ocean. They rise, and they descend, but they’re all a part of the ocean.

Perhaps my favorite part of Advice Not Given is the ending. “Our egos do not have to have the last word.” Our egos may keep us from accepting advice, but it can’t stop us from reading Advice Not Given.