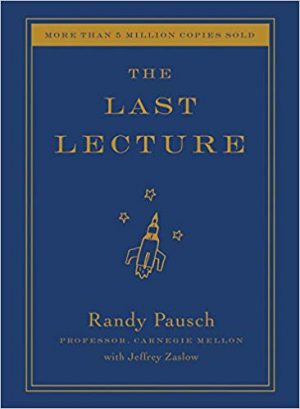 I can’t remember when I first heard about The Last Lecture (as the lecture). It’s been years ago now. However, I do know that it was Jeffrey Barnes’ retelling of a story in Beyond the Wisdom of Walt that brought me back to it. It was one of many simple stories with a meaning. In this case, it was a salt and pepper shaker that Walt Disney World replaced after Randy Pausch and his sister bought, then broke, them.

It’s a thing in academic circles to prepare a lecture like it’s your last. If you could choose anything, what would you lecture on? It’s an entertaining series that Carnegie Mellon University (CMU) started, but little did they know that fate would intersect with their series. It turns out, for Randy Pausch, it would be his last lecture. His pancreatic cancer was no longer in remission, and this would be the last shot to leave his mark at the university and on the world.

The title of the talk was “Achieving Your Childhood Dreams,” and it explains how Randy’s life, though cut short, allowed him to achieve many of his childhood dreams. As of this writing, the video has over 19 million views. The popularity of the talk spawned Randy to work with a writer to further capture some of his remaining time.

An impending death has a way of focusing your attention on what’s truly important. In Randy’s case, he was leaving behind his wife and young children. He wanted his children to know him as much as would be possible. Certainly, his wife, family, and friends would share his character, but it could never be enough.

I can understand this feeling, because, when we lost my brother, I could not help but weep that my nieces would never get the chance to know him like I knew him. They’d never understand the richness of his character.

It turns out that the talk was a twist. At one level, the talk was designed to inspire students and faculty at CMU just like the series was set up to do. However, if that was the only value to the lecture, it probably wouldn’t have happened. To prepare the lecture, Randy had to make the difficult decision to shift his focus from his wife and children. That’s a decision that would have been impossible to make knowing you had only months to live – except that the lecture was really his legacy for his children. It was a way that he could expose his core beliefs in a way that would be relatively immune to the effects of time and the fading of memories.

So, the lecture was a way of leaving himself for his children, and, as it turns out, so is the book. Captured as conversations between Randy and Jeffrey Zaslow, they took place while Randy was exercising, trying to stay as healthy as possible right up to the end. In a way, Randy found a way to extend his life beyond his life.

Life Lessons from the Dying

Bronnie Ware reported on what she found with her palliative care work in The Top Five Regrets of the Dying. However, The Last Lecture doesn’t seek to relay five profound observations about life. The goal is, instead, to save the stories and lessons that Randy held dear in his own life and those he wished to preserve for his children. The result is a series of short stories that shine light on some aspect of his life that was important for him.

There are a few statements that recur across the chapters and in ways that punctuate the important to Randy. One of those starts early in the book with, “It saddens me that many kids today are so coddled.” He returns to this point later when explaining that his dad believed “manual labor was beneath no one.” He explains that Coach Graham instilled in him a sense of needing to work hard. He discovered that feedback about how you’re doing means that other people care.

Whether it was Coach Graham or his father, somewhere he found a yearning to work hard. While he admits that, at times, he was a workaholic and didn’t take time to relax, the life he enjoyed came from his not hard work.

At one time or another, all of us have run into brick walls. Some door slammed in our face right as we arrived there. We’ve tried to be able to do something, and we failed. We’ve pounded our head into the wall until our forehead was flat. Randy believed that brick walls were there for a reason. Brick walls are an opportunity for us to demonstrate how badly we want something.

I’ll agree with the opposite assertion – but not necessarily that we should go charging through brick walls all the time. Randy himself quotes his father providing advice about navigating life, saying, “Just because you’re in the driver’s seat doesn’t mean you have to run people over.” In my experience, brick walls are sometimes placed there to help you remember to not run over people.

The opposite, I agree, is true. If you see a brick wall as a signal that you should give up, shut down, and never try again, you’ve missed the message. Brick walls – challenges – aren’t put in your way to cause you to shrink, cower, or give up. They’re there to shape your path. Sometimes, as Randy says, you need to demonstrate how much you want something. Other times, you need to look for other ways to accomplish your goal.

Randy knew this, as he wanted to experience weightlessness – because he wanted to be an astronaut as a child, as I did – but was turned down at the last moment for a ride on NASA’s zero gravity plane. He had created a situation where his students would do an experiment on the aircraft but was told that student advisors weren’t allowed to ride along. It looks like a brick wall. However, the solution was to become the member of the press documenting the trip – which was allowed. You can decide whether he ran through the wall or found a way around it.

Inspiration is a word that is thrown around with abandon today. People seek to inspire their organization, their coworkers, and their children. However, for most, this is an empty statement. They no more know how to inspire others than they know how to build a rocket. However, Randy believed that inspiration was the ultimate tool for doing good. He sought to bring together worlds and inspire students with the possibilities that the new computer technologies were creating.

Everyone who lives a great life must have a purpose, something that they’re trying to accomplish. For Randy, it seems like the answer was giving others the gifts that were given to him, including inspiration.

Randy offers up a shortcut to life. It’s simply two words: hard work. It may not feel like much of a shortcut, but when you evaluate the alternatives, it can certainly feel that way. For Randy, he simply worked hard, and he attracted his dreams. He prepared, and the opportunities eventually came to him – even if he occasionally had to encourage them.

In the end, Randy reports that he didn’t do The Last Lecture because he wanted to. He did it because he had to. I understand the “had to” when it comes to being true to living your life authentically. Maybe you’ll find some of the answers that you need to live as yourself in The Last Lecture.