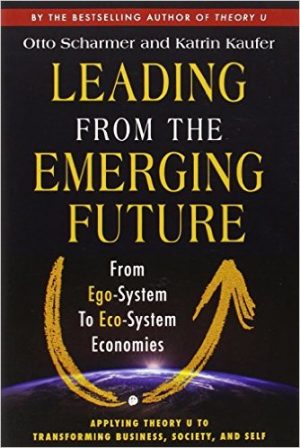 I read Theory U and became aware of another book by Otto Scharmer, Leading from the Emerging Future: From Ego-System to Eco-System Economies and I didn’t immediately read it. In fact, I didn’t read it until it became part of the coursework for an EdX.org course that Otto was leading. EdX is interesting because it offers Massively Open Online Course. The course I took was U.Lab: Transforming Business, Society, and Self. It was an opportunity for me to experience the concept and look at material I was interested in at the same time.

According to Scharmer, there are three big divides that drive much of the pain in the world. They are:

Scharmer believes that there’s a natural evolution in our systems in society and in business where we move from more primitive ways of organizing to more advanced. The levels of this model are:

The premise is that the problems created by each level lead to the next level.

In the case of society much of undesirable outcomes are not visible immediately as we make a transition from one form of organization to another. Moving to free markets was great except that it created the opportunity for folks to take advantage of the system so we introduced regulatory agencies to regulate the level to which people could take advantage of the free market. Those regulatory agencies end up mired in bureaucracy and eventually weigh down the free market.

Societies and organizations are complex systems and so our changes today have unintended consequences that we simply cannot foresee. Consider the collapse of Aboriginal society with the introduction of the steel axe. (See Diffusion of Innovations for more.) The Heretic’s Guide to Best Practices and Dialogue Mapping spoke of Horst Rittel’s work on wicked problems and how our interactions with a problem change it.

Scharmer works at MIT. Jay Forester, the inventor of system dynamics, created a team at MIT which included Donella Meadows (who wrote Thinking in Systems). Donella also participated in the landmark book The Limits to Growth which challenged us to understand that we were – or soon would be – overconsuming the resources available on the planet. It makes sense that Scharmer’s work builds on the work of the systems dynamics team at MIT.

As I mentioned in my review of The Fifth Discipline, I read Harrison Burgeron some time ago and wondered about a society when everyone was precisely equal. This was, accomplished by holding back those who had excess gifts rather than building up those who were less gifted. Equality sounds like a good idea until you get too close and until you decide that everyone must have the exact same gifts and experiences. The problem is that this is a utopian ideal that isn’t practical. I’ll never be as good at ice skating as someone who loves it. However, confront me with a problem that needs an out of the box solution and I’m your man.

However, is the level of inequality getting larger, smaller, or staying the same? In the US the answer is disappointing. After the financial crisis in 2008 the largest banks got bigger – not smaller. Despite the bailouts. Despite too big to fail. The largest banks got larger. The inequality between the “haves and the have nots” got wider. This leads us further away from a sustainable solution for our global economy.

Do What You Love, Love What You Do

In Finding Flow, Mihaly Csikszentmihalyi, quoted leaders he interviewed “You could say that I worked every minute of my life, or you could say with equal justice that I never worked a day.” Flow was, of course, about getting into the most productive state of being possible. In Theory U Scharmer quoted Michael Ray of Stanford University with “Do what you love, love what you do.” Then there’s Steven Jobs commencement speech at Stanford University in June of 2005 where he implores the students “You’ve got to find what you love.”

One of the great opportunities of our world today is that the barriers are getting smaller. It’s never been easier for someone to write a book than it is today. You don’t have to find an agent and a publisher. If you’re willing to plunk down a few hundred dollars your book can be available for purchasers on every book web site – and at bookstores nationwide. You don’t even have to purchase a minimum run of books – you just need to have an idea and be willing to write about it. (See Self Publishing with Lulu.com)

Recording music and creating videos are also much cheaper than they ever were. It’s now trivially easy to create your own CD of music and sell it through the Internet – or to license it for online download. Video cameras that shoot good video can be had for $100. An audio recorder is another $200 – and you’ve now got a complete solution to audio and video production. (See my Amazon AStore Studio Recommendations for more of inexpensive recording solutions.)

There is little reason not to pursue your dreams and try things. Go become a pilot. Try your hand at becoming a chef. Get trained as a comedian. (See I am Comedian.) Today if you want to learn a skill you can do an EdX.org course. You can purchase online training from accredited schools and libraries of quality content. The barriers – though they still exist to some extent are much smaller than they once were.

Albert Schweitzer said, “Success is not the key to happiness. Happiness is the key to success. If you love what you are doing you will be successful.”

Daniel Pink said in Drive that people are motivated by autonomy, mastery, and purpose. Scharmer sees this as the level four organization – one that is co-creative. Said differently, it’s a place where everyone is fully engaged. Richard Hackman in Collaborative Intelligence calls an effective Co-creative state an effective team. As we move towards a world where the barriers are smaller it’s easier for folks to connect and to truly work together in things that have meaning. The entire U.Lab class that I took could be considered an example in many of these concepts. At one level it’s a part of the social experiment of Massively Open Online Courses. The goal was to bring together folks from across the globe and equip them to be more productive at changing their local communities and larger policies. It was also, as Scharmer suggests in Theory U a prototype for a model to share his ideas with others.

I don’t know if your driving purpose is to change the world – or leave a ding in the universe (ala Steve Jobs) but if you’re interested in seeing how you might impact the world, Leading from the Emerging Future is worth a read.