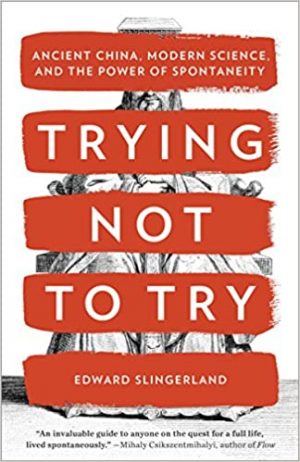 I think everyone wants the easy life. We’d love for things to be effortless. We’d all love to be powerful. These things are at the heart of Trying Not to Try: Ancient China, Modern Science, and the Power of Spontaneity. Though we all want to get to effortless and powerful, no one seems to have cracked the magic formula.

To set the context, we need understand two Chinese words. The first is wu-wei, which is pronounced “ooo-way”. This word is literally “no trying” or “no doing” but is about effortless and unconscious. The second word is de, pronounced “duh.” It is virtue, power, or charismatic power. It’s the thing that others see and can’t put their finger on but know they want. When we’re doing wu-wei, then de naturally follows. The more we can be in an effortless state, the more de we radiate.

The concept of things being effortless doesn’t mean that things are being done. It’s more accurate to say that things are getting done automatically from what Daniel Kahneman calls System 1. (See Thinking, Fast and Slow for more.) It’s the hot cognition that happens seemingly without thought. It’s automatic.

The need to consider, ponder, and evaluate slows things down and feels unnatural. The effortlessness embodied in wu-wei is the kind of automatic processing that Anders Ericsson and Robert Pool describe in Peak. It’s when there has been so much purposeful practice that everything has been converted into something that happens effortlessly – without conscious thought.

Steven Kotler speaks of the same thing in The Rise of Superman when he explains that athletes need to get into flow – and stay there – if they’re going to accomplish the amazing and seemingly superhuman things that they do. Kotler bases his work on the work of Mihaly Csikszentmihalyi and Flow.

Going with the Flow

Slingerland is careful to draw some distinction between wu-wei and flow. He explains that the focus on the relative degree of challenge between skill and challenge has become a preoccupation with Csikszentmihalyi’s work, and how this challenge isn’t conducive to effortlessness. Here, Slingerland has a point that Csikszentmihalyi’s initial data didn’t always reflect folks who were in challenging situations when he did his initial research. Sometimes, folks who reported the conditions associated with flow were doing rather mundane things.

J. Keith Miller commented in A Hunger for Healing about a Zen saying, “After enlightenment, draw water, chop wood.” Mark Epstein in Advice Not Given says, “After the ecstasy, it is said, comes the laundry.” Thupten Jinpa in A Fearless Heart explains that what we call walking meditation is a part of “post-sitting practices” – the idea being that monks bring full awareness to their everyday activities not just when they’re sitting meditating. In short, our attainment of enlightenment doesn’t free us from the simple work of life; we need to continue to find peace, joy, and effortlessness in all we do.

Kathleen Norris in Acedia & Me comments that she regains herself by doing ordinary things. She drains away the challenges of acedia – which is roughly equivalent to burnout in today’s language – by doing things in an effortless and accepting way. (You can learn much more about burnout at ExtinguishBurnout.com)

While Slingerland takes issue with Csikszentmihalyi’s focus on challenge, he does so in the context of ancient Chinese thinkers, who struggled to find the way to effortless action. When we think about this instead as enlightenment or bliss, we can distance ourselves from the specific concern of challenge and turn the question on its head. The answer as to whether the path to wu-wei is paved with effort, without effort, or with only some kinds of effort seems unclear. What is clear is that the destination seems to have been found by several who took different roads.

Some states are only reachable through indirect means. Consider happiness. Those who pursue it are often miserable. They believe that somehow they need to be happier than they are. Many books have been written more or less explicitly about how to find happiness, including Stumbling on Happiness, which explains that most of the time what we believe will make us happy doesn’t – or doesn’t for long. Happiness looks at happiness from the perspective of a skill rather than an end-state and narrowly avoids the trap that you’re never in the state “enough,” because you can always become more skillful at something.

The trick it seems with wu-wei is that you can’t pursue it directly. This reminds me of the story of the two Hindu goddesses – wealth and knowledge – and only by pursuing knowledge will wealth come to you. (See The Heretic’s Guide to Management and A Philosopher’s Notes for more.)

One of my favorite models of all time is Jonathan Haidt’s Elephant-Rider-Path model from The Happiness Hypothesis. The rational rider (System 2) sits on top of the emotional elephant (System 1), and they’re in a constant battle for control. The elephant allows the rider to feel like they’re in control until the elephant starts to care deeply about something.

The key to wu-wei is to build a relationship between our elephant and our rider such that both trust the other rather than distrusting the other. By integrating these two aspects of our psyche with respect, we spend less time battling internally and have more energy to share with the world.

In Service of Other

To get to wu-wei, we’re encouraged to do things in service of bigger things, like improving others’ lives or moving forward humanity. This sentiment seems to be wired into our being based on the game theory attempts of Axelrod in The Evolution of Cooperation. Folks like Robert Greenleaf urge us to pursue Servant Leadership. Many have written about the power of doing things for others and how this makes us feel better.

Even twelve-step groups are clear about the power of service to harmonize people and make them return to a state of being more whole.

It’s not that any of us always have pure thoughts or thoughts about others. Even the work of the Jesuits wasn’t successful in eliminating these selfish tendencies. (See Heroic Leadership.) However, the more that we seek to channel our passions in ways that are positive, the more domesticated our passions become and the less energy we must spend trying to consciously control them.

Returning our energies to other things, we can accept the occasional selfish thought while recognizing a generally other-focused perspective on life.

Perhaps the greatest challenge to wu-wei or any form of enlightenment is that there is no one who can show off the path to achieve it. There’s no 3, 6, 8, or even 12-step guides to becoming enlightened. Instead, there are a variety of thoughts and approaches and a seemingly endless array of folks who have made it there but are unable to articulate their path.

For the few who are able to articulate a path of enlightenment, they seem focused on very high bars of self-sacrifice. These high bars are not the kind that most people can make – and as a result, they can’t follow the recipe. Perhaps this is intentional, or perhaps it’s a rare person who is able to reach enlightenment or moral goodness. However, perhaps it’s that the shallow slope needed by most people to reach this elusive state isn’t a prescriptive path that leads to predictable results. Perhaps the path is the result of the person themselves and what they need most.

Some people do virtuous acts. Whether it’s work, a connection, money, or whatever to help someone else out, these virtuous acts help drive our interconnectedness as a society – until we learn that there’s a catch. They’re not really being virtuous. They’re doing something for us with the expectation of something in return. More than just karma, they expect that they’ll get some sort of tangible benefit from it.

We’ve learned to distrust even the virtuous act for fear that people want something from it.

In Inside Jokes, there is the suggestion that we may connect with others who share comedy with us, because, at their very, core your response to jokes is unfakeable. Paul Ekman coined the Duchenne smile as a genuine one. (See Emotional Awareness, Trust Me, and Social Engineering for more.) This unfakeable nature makes them ideal for detection. If someone is able to display the Duchenne smile, then they must really like it.

Similarly, it’s thought that wu-wei shows a naturalness that cannot be faked. A peacock’s feathers are an extravagance that serves no material purpose except to show peahens that the peacock has something going on – otherwise he couldn’t afford to spend such effort to make such lavish feathers. With wu-wei, you cannot fake the naturalness, because to do so would require conscious control, which would break the whole flow of the moment. In The Rise of Superman, Kotler shares the stories of high-performance, extreme athletes who are killed by their sports, presumably because they tried overthinking their situation and couldn’t make the right moves at the right time.