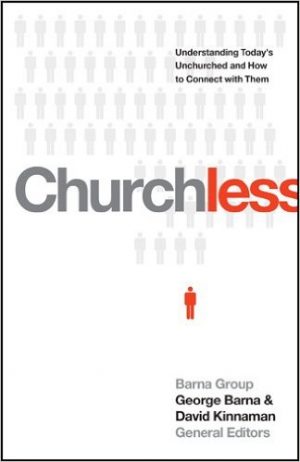 Sometimes a book review and my experiences connect, and that triggers a chain reaction of books to read. I’m in one of those chain reactions now. I started with Theory U which led to Bowling Alone which led to reading Churchless. The last connection will make more sense once I’ve done the review for Bowling Alone. However for now, I’ll share that in Bowling Alone much of the book is the research about how we as Americans are not joining and participating in clubs as much as we once were. There’s a bit of data about how this decline worked relative to churches, but during a church service I heard many more statistics about the challenges of churches in America. When I inquired, my pastor shared the data was from the Barna group – and that led me to their latest book Churchless.

Churchless is the study of why Americans aren’t connected to church. The research indicates that slightly less than half (49%) of Americans attend church regularly – though regularly is defined liberally as attending once a month. Another 8 percent of Americans attend church occasionally, some of which are what the book calls CEOs – Christmas and Easter Only. Interestingly 33% of Americans are what the book considers de-churched. That is they have previously had a church experience but have left the church for some reason – perhaps they’re only on hiatus.

One of the things for which I’ve heard over and over again in the statistics, including those in Churchless and Bowling Alone, is that in many respects the Christian doesn’t look that different from the non-Christian. For instance, Christian and non-Christian youth are essentially equal in their sexual activity – despite the strong moral line that the church takes against sex before marriage. (For the record, I’ve not found the support for this in the scripture despite numerous attempts to find it in the translations as well as the original Greek.) Sure, Christians are more generous (by 5x) according to Churchless – but that’s not an outwardly visible aspect of Christian life. You may recall from Diffusion of Innovations that visibility is one of the key factors in influencing how quickly an innovation diffuses through a network. If there’s no visible difference in the way we behave as Christians – why would anyone want to become one of us?

Another criticism leveled against the church is often that the Bible isn’t relevant to today’s world. While many people – including those who are not church attenders – believe that the Bible was the inspired word of God, and still others believe them to be important stories but written by man – many struggle with how the Bible is relevant to their worlds today. In America, we’ve become self-reliant. We believe that we can make our own way and we don’t need anyone else. If we can make our own way then why do we need God in our lives? Even if you realize that you need God in your life, does the church experience connect you with God? All too often, the answer is no. 20% of the people who’ve dropped out from church say that they didn’t feel the presence of God there. If people can’t feel the presence of God then why should they come? Too often people walk out of church believing that it was just a performance, a show, or an obligation. That’s no way to motivate people.

The key point to Christianity – the one thing that Jesus said over and over again – is that we should love. As I’ve mentioned before the Greek has three words for love. Eros – erotic love, Philo – Brotherly love, and Agape – God’s unconditional love for his people. Buddhists call Agape love compassion. It’s loving everyone. On this mark the unchurched are clear. They don’t believe that the church is a loving church, and accepting church, a church worthy to be called the bride of Christ. Instead, the church has become more like the Pharisees of the bible. (Given that Jesus called the Pharisees a brood of vipers, it’s probably not a good thing.) Both from the inside of a church and for those on the outside it can seem like a church is all about rules and values that you must hold. It’s often seen that you are either with “us,” the churchgoing Christians, or you’re in the “them” category. Unchurched often feel judged when they walk in the door.

Making Your Way in the World Today

The theme song for the television show “Cheers” includes the words, “Making the way in the world today takes everything that you’ve got.” Certainly we feel that. Today Americans are more stressed out than a decade ago. We feel like we’re always busy. We never have enough time to do what is expected of us. This one factor has led to lower church attendance. When you’re following a travel hockey team and you’re not home on Sunday morning – making church is hard. You can tell yourself that it’s only for a while and it’s not that big a deal, but all of the demands on our schedules and individuals skipping church is reducing the number of people in the building each weekend. The point here is that sometimes the numbers don’t tell the full story. It’s possible that you would assume that the congregation is shrinking because the numbers from the weekly attendance is dropping. However, if every family misses just one weekend a month your attendance drops 25% overall.

The point of my reading of Churchless wasn’t to study how I could grow my church – because I’m not involved in that aspect of the church. The goal for me was to evaluate what’s going on with churches in the larger context of the societal trends in Bowling Alone. On balance, it seems like the church is impacted by the same factors that are impacting society as a whole. Adults are on their self-reliance path and that path doesn’t lead someone to understand their need for God – and that means no church. It’s disturbing that we’re valuing social media more and real conversations less. The data on the use of social networks like Facebook says that we’re feeling more distant from one another even as we’re technically more aware of what they’re doing. The factors that are driving people away from the church – like the feeling of entitlement – are driving people away from social institutions. We believe that we are entitled to be a part of the conversation – just like we are on Facebook – and church experiences of today aren’t that.

However, perhaps if you read Churchless you’ll be able to find ways to make your church more appealing to those who aren’t currently attending church. Give it a try.