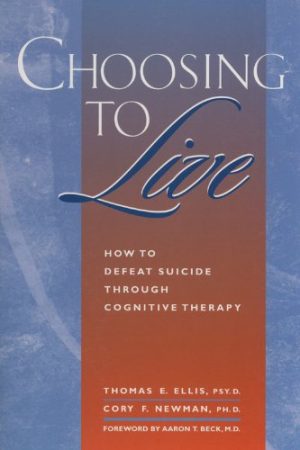 A long time ago, I was told that no one is interested in a negative review.  I was reviewing technology at the time, so a few of the products I set out to review never got a story.  I’ve mostly carried that through in my book reviews.  However, Choosing to Live: How to Defeat Suicide Through Cognitive Therapy is different.  There are some good things to learn, but more importantly, there are some commonly repeated myths that need addressed – so let’s do that.

There’s often quoted statement that most people who die by suicide are mentally ill or have a diagnosable and treatable psychiatric disorder.  There’s some variation to the myth, with people adding rates like 90% or 95% to make it seem more real.  However, the problem is that there’s no root research to support this.  In fact, modern research and thinking doesn’t believe this at all.  Certainly, some percentage of people do have a treatable psychological disturbance – but the number isn’t 90-95%.  There’s no credible research I’ve seen that even supports the idea that it’s a majority.

It seems to be a holdover from the idea “you’d have to be crazy to kill yourself.”  Of course, Shneidman and others have demonstrated that people die by suicide for a variety of reasons, but often because there’s some sort of psychological pain that is unbearable (see The Suicidal Mind) or because they’ve become hopeless (see The Noonday Demon).

The exact quote from the book is, “Studies also show that suicidal individuals, terminally ill or not, are almost invariably clinically depressed.”  Except there is no research that says that – and the author didn’t respond to a request for him to clarify this statement.  Is there a correlation between depression and suicide?  Absolutely.  There’s a stronger correlation between hopelessness and suicide.  There’s an even stronger correlation with substance use disorder.  It is true that some are depressed?  Yes.  Here’s the real problem: that says very little, since a non-trivial amount of the population meets criteria for depression – at least to the level of being given a prescription for an SSRI.

Myth: Self-Destructive Behaviors Are Suicidal but Won’t Admit It

Another direct quote: “Indeed, some suicide theorists have proposed subintentioned suicide to explain such self-destructive behaviors in people who may not be depressed and who deny that they wish to die.”  There’s a long distance between self-harm and suicide.  Again, a correlation exists.  However, it’s too much to say that all self-harm is a desire for suicide.  For instance, we know that people who do self-harm are often trying to achieve a pain they can experience and control due to emotional disconnection or suppression.  One can be inflicting self-harm and not be suicidal.  Admittedly, the ability to do self-harm makes it easier to die by suicide later – but it doesn’t mean that’s where they are now.

Myth: Half the Population Has Had Suicidal Thoughts

Another direct quote: “Some studies have indicated that half of the population has had such thoughts at one time or another.”  The problem is that these numbers far exceed the accepted research that places the number at somewhere between 1 in 5 and 1 in 6.  Yes, people think about suicide much more frequently than we admit they do – however, it’s not 1 in 2 people unless the incidence rate is substantially under reported.

It’s appropriate to acknowledge that many more people consider suicide than we believe, but it’s too far to say that it’s half the population.

This quote is, “Left untreated, one depressed person in six will commit suicide.”  Not only is there no research support for this, but there’s no effective way to do this research.  How do you find untreated people who have depression?  If you found them, no review board would let you leave one group without “treatment as usual,” which is probably CBT or DBT.  As was mentioned above, people who die by suicide are more likely to have depression—but there’s no way to know how many would die by suicide.

Retrospective studies and psychological autopsies don’t have the precision to make these kinds of determinations.

Myth: The Drugs Made Them Do It

Here, the quote is, “Abuse of drugs and alcohol can lead people to become so chemically addicted that they develop another problem (the addiction) that they are unable to beat.”  This is the pharmacological view of suicide.  It’s been disproven but remains popular.  (See Chasing the Scream, The Globalization of Addiction and Dreamland for more.)  The truth is that substance use disorder (SUD) is a result of a coping strategy that has taken control over the person.  They leaned on the coping strategy in the first place, because there’s some aspect of their lives that is unsatisfying.  Much of what we were taught about drugs was simply false.  The programs, like DARE, didn’t work – they made things worse.  And we’re still fighting our way out of it.

Myth: Surfacing Subconscious Can Be Brought to Consciousness Easily

The direct quote is, “Depressive thinking patterns, while usually outside of a person’s awareness, can be brought into awareness fairly readily.”  Most professionals would say that subconscious thoughts can sometimes be easy to surface but some are more difficult to surface.  In fact, in Immunity to Change, we discover how persistent some beliefs can be.

With the list of myths out of the way, it’s time to highlight some of the good that the book has to offer.  One of those is the recognition that suicidal people can come to see their lives as a long string of failures.  Whether this is due to unrealistic or perfectionistic perspectives about what they should be able to accomplish, the disappointment is tangible.  It’s also, of course, possible that they’ve encountered a long string of difficult circumstances beyond their control.  However, in either case, when someone believes it’s hopeless that they’ll start meeting expectations, it can mean a suicide attempt.

Suicidal people are, most frequently, not being selfish in their death.  In many cases, the person dying by suicide is so focused on their situation, their pain, and their circumstances that they don’t consider other people.  It’s not that they’re inconsiderate in general but rather the cognitive constriction (see The Suicidal Mind) and the intense pain make it difficult for them to consider the impact to others.

A Permanent Solution to a Temporary Problem

The research seems to indicate that most suicidal crises are short-lived.  Said differently, the decision to die by suicide is a permanent decision that’s made in a rather short moment of pain.  What we know is that even small deterrents that block their chosen means can make a large difference in the rate of suicides.  If we’re encountering someone who may be suicidal, the best thing we can do is just keep them talking.  Between the benefit of the connection and the probability that you’ll be speaking with them beyond their period of suicidality, it’s a great strategy.

No one has a perfect life.  We’ve all got things that we struggle with – things that we believe are difficult and challenging.  However, just because life is difficult doesn’t mean that there aren’t positive aspects, and it doesn’t mean that we’re not loved.  For all of the bad information in Choosing to Live, a reminder that you can be loved while struggling or being imperfect is a pretty important way to end.