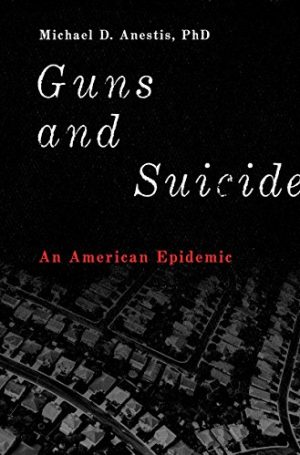 Very few things could have a greater immediate and visceral impact on people than talking about Guns and Suicide.  Few topics are more sensitized in America than guns.  Few topics are more emotional than suicide.  No matter where you fall on guns, you likely have a strong opinion.  Some are heavily for, and some are heavily against.  Suicide is something that will likely impact each of us indirectly through our network of friends and their friends, and once it has, the world is different.

In Guns and Suicide, Michael Anestis walks through the issues and the opportunities to save lives – not by removing guns but rather by helping people store them more safely.

Yes, the right to bear arms is the Second Amendment, but I relate the position on gun ownership based on my home state of Indiana.  I believe we have some of the least restrictive gun laws in the US – second only after Texas.  We’ve been for a long time an “open carry” state, which means that your side arm, if you choose to wear one, can be openly visible.  We recently moved to what the NRA calls a “constitutional carry” state – that is a permit is no longer required to carry a handgun.

I personally own several guns and keep guns in both my office and home for protection – despite knowing that the odds I’ll need them are heavily against me.  The guns that are for home protection are all stored safely – they’re in a box or they have a trigger lock on them.

I make these points not because I want to convince you guns are good but rather to share that I don’t have any problems with guns – either for hunting or home protection.

I’ve lost two beloved members of my family to suicide – both completed with a firearm.  Several years ago, now my grandfather chose to end his life rather than face declining health.  While I disagree with his decision, I respect his right to make it.  In August of 2021, we lost our son, Alex, to suicide.  This more tragic, because Alex had his life in front of him, and his decision was not well-considered.

Two men in my life and two different situations both using firearms – and neither the same.  Both impactful.

Before getting to the impact of safe storage, it’s important to define what it means.  The answer is somewhat situationally dependent.  The short answer is that there’s some barrier to being able to use the weapon.  This could be that the ammunition is stored separately from the guns, or it could mean the use of a locking device.  Locking devices come in three major categories:

The Impact of Safe Storage

Research varies, as it always does, but some studies place the risk of suicide death from a gun that is stored loaded and easily accessible at nine times the rate of a gun that’s stored safely.  Pause for a second and ponder how a simple lock or vault can be enough to change an outcome so powerfully.  While the answer to the question of “how” the mechanisms work to create an impact, there’s no doubt that having guns stored safely has an impact.

It’s important to say that safe gun storage also impacts unintended discharge by a child as well as theft.  Certainly, the numbers are about suicide, but children discharging guns they find is a different kind of tragedy that also needs prevented.

One of the key barriers to people wanting to store guns safely is the concern that they’ll not be available during a home intrusion.  The truth is that guns are used to defend homes in just 0.9% of all home intrusions (data is from 2007-2011) – so, an incredibly small percentage.  The data showed that there was injury in 4.2% of the intrusion cases overall, and 4.1% when a gun was used for self-defense.  The net of all this is that gun use for self defense seems to make a negligible – if any – difference in the likelihood of injury from an attack.  (The data comes from the journal article, “The epidemiology of self-defense gun use: Evidence from the National Crime Victimization Surveys 2007–2011,” not from this book.)

There’s no statistical evidence for safe storage vs. unsafe storage, which isn’t surprising given the incredibly low incidence rate.  It’s hard to study things when the overall rate is so low.  They’re so low, that it’s difficult to believe that it will be an event that will impact most people.

Statistics can show you odd relationships – sometimes that make little sense.  There’s pretty good research that says if you add a barrier to a chosen form of suicide, people rarely will switch to a different method.  If they want to jump from a bridge, and you add a fence, they’re likely to not die by suicide.  That’s why, when you read that a gun purchase is an indicator of higher rates – even excluding suicides that involve a gun – it makes you tilt your head.

Admitting you have a problem is hard for all of us.  Trying to explain to someone that you’re feeling trauma because of something that you’ve seen or been through is difficult – particularly if the situation wasn’t traumatizing to them or is perceived as “normal.”  Soldiers underreporting of suicidal thoughts should not be surprising.  The culture of macho-toughness and the general need to not be seen as weak don’t make it easy to admit you’re struggling.

The problem is that you can’t help someone that you don’t know is struggling – and the very act of sharing your suicidal thoughts with someone makes them less intense and painful.  (For the mechanics of this, see White Bears and Other Unwanted Thoughts.)

Background checks have been a part of gun purchases for some time.  Initially installed with a waiting period, this waiting period has all but been resolved thanks to technology.  However, not all background checks are the same.  Some operate solely at a federal level, some at a state level, and others operate all the way down to the local level.  It turns out the level at which the background check is done matters to the outcomes.  Federal level checks were associated with an 11.64 per 100,000 suicide rate, and local level checks with a 5.74 per 100,000 rate.  Clearly, the more locally you evaluate gun ownership, the more probable it is that you’ll catch concerns.

You don’t need a background check to check out the background in Guns and Suicide.