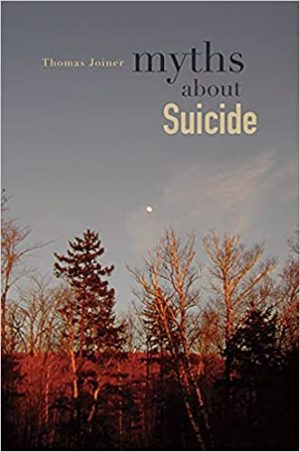 I was surprised when Alex took his life. I thought we knew about what the warning signs were for suicide, but clearly, we’re wrong. Myths about Suicide explores some of the common myths about suicide – including myths that we still teach people who are supposed to identify risk for suicide in the people they work with.

Joiner’s model was explored more fully in Why People Die by Suicide, but, in brief, he believes that factors related to the degree of connectedness, the degree of burdensomeness, and the ability to actuate self-harm are the three factors that make the difference between those who attempt suicide and those who don’t.

Perception is the Rule

The key with burdensomeness and connectedness is that they’re rather abstract concepts that are not about the reality of the situation but are instead about the person’s perception. Some may believe that they’re not well connected, yet show every indication that they are very connected to their families, friends, and communities. It’s not the objective measures that matter, it’s the subjective perception in their minds that matters – and that’s where things can get off track.

Similarly, people view the degree to which they’re a burden and decide that they are or are not a burden without verifying their perception with others. Instead of knowing what others think about whether they’re a burden or a help, they make their own evaluation, and the evaluation isn’t always good.

The World Will Be Better Off

There’s a Doctor Who episode, “The Wedding of River Song,” that culminates in a conversation where River Song tells the Doctor, “You’ve decided the universe is better off without you, but the universe doesn’t agree.” This is often the case for those who ultimately decide to commit suicide. They’ve decided that the world is better off without them – either because they need to relieve their pain or because they feel as if they’re a burden. I can tell you, personally and from the stories of others who have lost their loved ones from suicide, we don’t agree.

Joiner asserts that one of the better indicators of potential suicide is agitation. If you believe, as Shneidman explains in The Suicidal Mind, that suicidal people are ambivalent, then it’s easy to see the relationship between agitation and suicide. Ambivalence isn’t a lack of energy towards something but rather the presence of competing forces. Agitation is a set of competing forces that create turmoil on the part of someone – those same conflicting forces that can lead to ambivalence. Superforecasting explains that we say the chances are 50/50 when we don’t know how to rate the probabilities. In agitation, the forces are fighting in the arena of the mind to get the upper hand.

Kurt Lewin in Principles of Topological Psychology explains that it’s these competing forces that once decided propel people from one area or perspective to another. There’s reason to be concerned when we don’t know which force will win.

What sense does it make for someone who is planning on killing themselves today to ask for someone to write them a check and mail it to them? The answer is, of course, none. And yet, this is one of the scenarios described in the book. The only way to explain this is the conflict that exists in the mind about whether to live or die.

If you’re going to live, you’ll need to pay the rent next month; if not, less so. When the person asked for the money, they were intending to live, but it was the force propelling them towards death that ultimately won the war.

The fact that there are two processes – one for living and one for dying – that are battling it out inside the head of the suicidal person is a strange thing indeed. Most people assume as single train of thought and a predictable path, but that’s not the case.

Most people are scared to talk about suicide. It’s a difficult topic that no one wants to bring up. (See Crucial Conversations if you’re struggling with hard talks.) The fear is that if you bring up suicide, you’ll give someone the idea that it’s something they might want to try. This fear is, thankfully, false. You can and should talk to people about suicide, because being open about it seems to reduce the chances.

There’s an exception to the rule related to the media and cases where suicide may be unintentionally glorified. In those cases, it’s better to rethink the approach or just skip the story all together – that is, if your goal is to stop suicide.

Speaking of stopping suicides, what happens if you thwart someone’s attempt? Will they just try again at another time or in another way? The research says no. 95% of the people who were stopped trying to jump off the Golden Gate Bridge never committed suicide. Apparently, the fact that someone stopped them reset the thinking and disrupted the cycles that told them that the world really would be better off without them.

If you’re given an opportunity to take action to prevent a suicide, the chances are you’re being given a chance to save a life – if you’re willing to take it.

If we’ve got suicide prevention lines and we can place telephones on the bridge, it stands to reason that we can prevent suicides by simply adding the phones. The problem is this doesn’t seem to work. The impersonal call boxes don’t seem to get used. They’re an interesting sign about how the community wants people to live but the sign isn’t strong enough – or the suicidal person is able to ignore them well enough that they have no impact.

It seems like there must be some person reaching out to make it work.

The funny thing is just the reaching out – whether it’s as simple as a smile or a computer-generated postcard – works. Sure, people acknowledge that they know the postcard wasn’t truly personal, but somehow the fact that there was a reach out is enough. We seem to be willing to give folks the benefit of the doubt. This fact opens the door for long-term care of suicidal patients and of people who are impacted by tragedy to receive automated responses that need to be only slightly personalized to be effective – that could be a good thing.

It’s not a compensation for the pain and suffering, but it does seem to help a bit.

The relationship between mental health and quality sleep is well established. The better sleep we get, the more we’re able to function. The ability to clear the neurotoxins that our brain naturally creates while awake confers on us greater emotional capacity and better reasoning. It’s little surprise, then, that when we face nightmares, we see higher rates of suicide. The one last respite from the constant turmoil and stream of internal voices is removed from us by nightmares.

One of the biggest challenges with patients with post-traumatic stress disorder (PTSD) is the inability to completely process the trauma – which can be minor – that triggered the PTSD. Patients continue to replay the events over and over but never resolve them. Whether waking or sleeping, it’s the failure to resolve the situation or process it to the point that you’re able to make sense of it that keeps you stuck. In Opening Up, Pennebaker speaks of PTSD and techniques for helping free people from the cycle. I wonder how many people who die by suicide are really PTSD victims whose PTSD was never diagnosed – which may have been triggered by something very small.

It’s important to list the myths that Joiner confronts in the book, since I could find no listing of them anywhere else. Again, these are all myths:

I don’t know about you, but I’m glad that I was able to discover some of the Myths about Suicide.