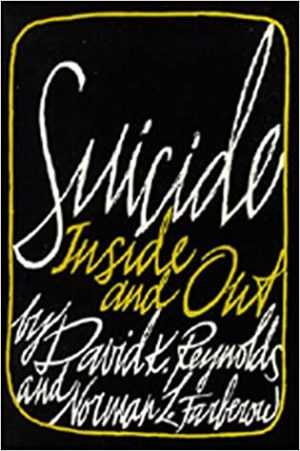 Years ago, I was doing a conference in the Union Square area of San Francisco, and I received a warning about the homeless in the area.  During the day, things were fine; but I shouldn’t go walking alone at night, because many of the homeless in the area had untreated mental illness.  As I inquired more about it, I was told that since the state shut down the mental institutions and “dumped” those with mental illnesses on the streets, it was impossible to control the homeless population – and it was riskier to ignore them.

This is what I kept seeing as I was reading Suicide: Inside and Out.  It’s a story of the mental hospitals that are all but gone.  State run facilities are, for the most part, a thing of the past.  They were dismantled both figuratively and literally because of their dysfunction, some of which is explained in the book.

The core of the book is the account of David Kent Reynolds who went inside the mental hospital as a patient.  The backstory was devised to make him appear as a suicide risk, and he, at one point, faked a suicide attempt.  Those who criticize the work (and the book) attack it on ethical grounds or on the inconsistencies generated by placing a presumably sane and non-suicidal person in the midst of a system designed for those who needed care.

My own conflict was less about the ruse and more about the factors that moved people further towards – and not away from – suicide.  Thomas Joiner in Why People Die by Suicide focuses on three factors for suicide risk: self-harm tolerance, burdensomeness, and connectedness.  While self-harm tolerance isn’t impacted, burdensomeness and connectedness are both negatively impacted by an inpatient program.  Several aspects of the report indicated the sense that Reynolds was a burden and there was minimal contact with the outside world.  In fact, there was only one pre-arranged contact from the outside world and one meeting with the administrator who knew Reynolds’ true identity.

Suicide status, or “S-status,” meant certain things, not the least of which was isolation.  Instead of being relatively free to roam in an open ward, suicide watched patients had less mobility and freedom – and certainly less privacy.  While Reynolds explains that aides did their best to provide a modicum of privacy, it was still difficult to balance the need to protect a patient from themselves and simultaneously give them freedom.

The privileges that come with being off suicide status are many, and so it behooves the S-status patient to try to convince the staff that they’re not really considering suicide any longer – whether they are or not.  It’s a careful balance between being seen as sane enough to know you’re sick and seeming that you can’t possibly be as well as you’re letting on.

One of Reynolds’ observations was that the person dedicated to their self-destruction wouldn’t have much of a problem attempting suicide again, since it’s practically impossible to protect someone from themselves every moment of every day.  It’s too easy to grab a razor or a rope.  It’s even quicker to step in front of a speeding car – all these opportunities and more presented themselves during Reynolds’ experiment.

This leads to the particularly thorny problem with caring for severely and persistently suicidal people.  You can’t take your eyes off of them for a moment for fear that that moment may be their last.

The Fifth Discipline Fieldbook shares that the word “ubuntu” stems from the Zulu phrase “Umuntu ngumuntu ngabantu,” which means “A person is a person because of other people.”  Reynolds made it clear that people failing to acknowledge him – either in general or by speaking about him but not to or with him – was one of the most difficult parts.  He craved acknowledgement as a human being.

This is the most basic form of connectedness – connected to others at a level of at least acknowledgement of existence.  Deeper connections are, of course, necessary.  However, they’re all built on the foundations that people are visible.

Today and tomorrow are the same.  There’s little reason to look forward to one day versus the next, because everything is the same.  It’s a monotonous march across the pages of time, which seems to have no beginning, no middle, and no end.  People speak of beach time, where the grid-like confines of a quarter-hour calendar are lost to the waves gently lapping at the shore.  Unlike the pleasant images of the beach, time wasn’t under the patient’s influence or control.

“Learned helplessness” was Marty Seligman’s phrase for the feeling that you didn’t have any control of your circumstances, so there was no point in trying to make it better.  (See Seligman’s work in The Hope Circuit for more.)  Others have framed the lack of control in terms of a lack of hope.  C.R. Snyder explains in The Psychology of Hope that hope is built on willpower and waypower, where waypower is knowing the path forward.

Then and now, the best indicator of whether someone is a risk for suicide is their own assessment of the risk.  There are no widely accepted screening criteria with high confidence that can be used, and as a result, we still struggle to identify the real suicidal risk of anyone.  We have the statistics to show men vs. women and age-bracket vs. age-bracket, but these are generalities covered by statistical math that doesn’t reveal who needs the most attention – and who will be just fine.

If we’re going to get good at managing suicide, we’ll have to find a way to do better than asking the patient how they feel.  Suicide is too impulsive to believe that people will be able to self-diagnose.

Kurt Lewin described behavior as a function of both person and environment.  (See A Dynamic Theory of Personality for more.)  He knew that our behavior would change as the conditions changed, and he saw this as an opportunity to create environments for the best results.  However, the psychologists of Reynolds’ day held a different view.  They saw a patient’s behavior as a stable force driven by their makeup that couldn’t be shaped by the situation they were in.

Aides and nurses saw a different and more realistic view as they discovered that the conditions a patient found themselves in could substantially alter the kind of behavior the patient would exhibit.  In the most basic sense, patients would be nicer to those aides and nurses that they felt were kind to them.  This is one of the many factors that impacts patients who exit inpatient treatment.  They go back to the same situation that brought them to seek care in the first place.

There’s a flurry of activity when a tragedy – of any kind – strikes a person.  There’s initially a wealth of support from every angle.  However, as the days turn to weeks and weeks to months, the degree of support wanes, and the business is replaced with an icy calm.  It’s a time when one can pause, reflect, and wonder what’s next.  It’s a time when suicide may seem like an option.  In the moment of a great tragedy and loss, it can be that the mechanical and tactical aspects of the change are so consuming that they can help you avoid the extended thinking about the meaning of the event and how it will impact the rest of your life.

We see that often it’s when people appear to be getting out of depression or have been released from a hospital that they commit suicide.  Whether it’s that the psychomotor retardation associated with depression is waning or that people finally settle into the long-term implications, it’s not clear.  What is clear is that the danger associated with a loss doesn’t dissipate quickly.

One of the other concerning aspects of the account is the tendency towards decoupling from reality.  Increasingly, people would become involved in their own thoughts – whether or not they were connected to reality.  One begins a paranoid perception that everyone is out to get them or, at the very least, is always talking about them.  It’s hard to see that the world really doesn’t revolve around you when you’re inside your head, because your own internal world does.

The more that we can help people be grounded in realistic, positive futures, the less likely they are to invent their own distorted view that may tangle living and death in ways that mean they no longer want to live.

It’s important to realize that this may be one of the reasons why the staff can’t identify the “normal” person in the abnormal situation.  While other patients can see something different, the staff rarely can.  This is important as we look at suicidal ideation as a continuum on which people fall and not a destination or specific point.

Near the end of Suicide: Inside and Out is a list of suicidal clues.  They’re supposed to be indicators to look for when you are assessing the potential for suicidal attempts in a person.  I’ve elected not to reproduce them here in part because some are myths and in majority because their predictive value is low.  We get so wrapped up in the idea that we can ask a few questions and sort people into the high risk category (whatever that means) that we fail to realize that suicidal intent comes moment by moment and has very little relationship to the state the person is in when the questions are being asked.

We no longer have the opportunities that existed with David Kent Reynolds did his study – but even if we did, I’m not sure it would reveal any answers to why people commit suicide.  It feels like it doesn’t necessarily help to know Suicide: Inside and Out.