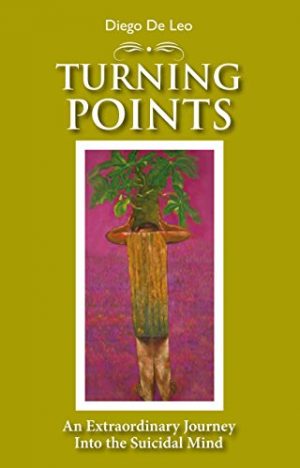 What better way to understand the suicidal mind than to hear the stories of those who attempted suicide, failed, and decided to share their experiences? That’s the heart of Turning Points: An Extraordinary Journey into the Suicidal Mind. The journey begins with an understanding of the researcher, Diego De Leo’s, story before proceeding through ten case studies of those who attempted suicide before concluding with two stories of those left behind. In the stories, there are clues to help discover what might be going on beneath the surface of the suicidal mind.

Continuation of the Unbearable

What if your view of life was that it was unbearable? What if you believed that you were being beaten up and knocked down by the slings and arrows of life that others seem to take in stride? What if you felt like there were no hope of that ever changing? This is the place that people find themselves in as they come to the precipice of suicide. They look at suicide as an escape or a way out from the unbearable pain that they suffer through.

What’s important here isn’t the objective reality of the situation. It can be that others would look at their burdens and think nothing of them. It’s possible that their friends and loved ones would look at their life and believe they’re blessed or charmed. What matters is the internal perspective of the person – how they feel about it. (See Choice Theory for more.)

It also doesn’t matter how long these feelings have lingered. They can be a fleeting thought or a drunken concept. What matters is that the thoughts, feelings, and beliefs exist at least for a moment. When the feelings are persistent, then suicidal ideation – or planning – can occur. If only fleeting, then there is an aspect of impulsivity to the suicide.

When all you can see is a fin above the water, you have no way of knowing if you’re seeing a dolphin or something much more sinister – a shark. So, too, is it hard to tell the difference between emotionally and physically helpful versus harmful people. Many of the people who struggle with depression and suicidal ideation have had numerous adverse childhood events (ACE), including physical and sexual abuse. (See How Children Succeed for more about the ACE study.) Through these ACE, they begin to question their role in the events and often blame themselves for the harm that was inflicted upon them.

To determine the difference between a shark and a dolphin, you must see more of them. If you want to discover which people are safe – and those who are not – you’ll need to see more of them. The difficult place is that to discover their safety, you must make yourself or those you care about at least somewhat vulnerable. (See Safe People for some clues and Trust=>Vulnerability=>Intimacy, Revisited for tips on being appropriately vulnerable.) Unfortunately, there aren’t good ways to quickly determine the safety of a person. The best protection we have for our children and others is the kind of relationship that encourages safety and openness. (See How to Talk So Kids Will Listen & Listen So Kids Will Talk for more.)

One of the ways that is recommended for discerning between those who are dolphins and those who are sharks is that dolphins don’t just say things, they live them. In my post, The Largest Gap in the World – Between Saying and Doing, I explain how saying things is easy and actually following through and doing them is hard. People who are safe – dolphins – are the kinds of people who are willing to do the hard work – to do what they say they’re going to do even when it’s hard.

One of the hallmarks of an addict, or addictive personality, is that when you conquer one addiction, another one pops up. In The Gifts of Imperfection, Brene Brown talks about having the “pupu platter of addictions.” In other words, a bit of this and a bit of that. People are often confused by addiction thinking that the only “valid” addictions are drugs or alcohol. (See The Globalization of Addiction for much more on this topic.) However, what we find with many people is that they have a tendency to become addicted or nearly addicted to many things.

If you were trying to write a recipe for creating problems down the road, teach them that their feelings don’t matter – or that feelings don’t exist. Make feelings – except perhaps rage – become unacceptable, and therefore if you have them, you’re not acceptable. The child learns that, to be loved, they must deny their emotions – or at the very least not share them with others.

The problem is that this traps the person into cutting off parts of themselves – and that harms them. (See The New Peoplemaking for more.) Some of the stories relayed the relatively unsafe nature of feelings in their families, and I’ve personally observed what happens when feelings must be denied in order to be okay. Eventually the feelings win, and the results can be a complete mental breakdown.

For the suicidal person, their thoughts are not their friends. Before an attempt, one author described their thoughts as an “arsenal.” Instead of nurturing and reassuring themselves, their thoughts created fear, anxiety, doubt, guilt, and shame. One of the big discoveries that led to cognitive behavioral therapy (CBT) is the fact that the way that we talk to ourselves about ourselves has a huge impact on our lives. Describing the thoughts as an arsenal pointed back at oneself is a tragedy from which there is no direct escape.

If someone else is putting you down or attacking you, you can get up and leave or defend yourself. When it’s your own internal voices, there is no escape, particularly if the thoughts interfere with sleep.

Far from being wasted time, sleep allows us to integrate our memories and to make sense of the day’s events. (See How We Learn.) Sleep also serves a neurological/biological function by allowing the brain to remove the buildup of waste that makes it difficult for us to think. The challenge for many people who have attempted suicide is that they’re not able to sleep – to rest and restore themselves. In some ways, they’re not able to escape their self-deprecating self-talk even for a few minutes of rest.

That’s one of the reasons why sleep is such a key component of self-care, and poor sleep habits lead to a cornucopia of other problems, including burnout. (See Extinguish Burnout for more help on avoiding burnout and doing good self-care.)

Immediately behind the arsenal of thoughts is suffocating anxiety. Most people aren’t clear about what anxiety is. Fear is when you know something may harm you and are concerned you may not be able to cope. (See Why Zebras Don’t Get Ulcers and Emotion and Adaptation for more.) Anxiety is when you don’t know what threat (stressor) may be coming. Anxiety is more troubling, because you can’t defend against an unknown problem.

The only solution to anxiety is to build more self-worth, self-agency, and belief in personal efficacy. With these, the fact that you can’t predict every potential stressor becomes less important as you worry less about what the threat is and instead focus on your capacity to weather the storms that do come.

The basic beliefs about the world – whether it’s helpful or hostile – lead to the degree to which the person must feel they have personal agency or the ability to get help from others – to be able to survive the day-to-day slings and arrows of life.

A Race Against the Clock

In an odd bit of logic, people sometimes report that they had to commit – or attempt – suicide quickly. Some undoubtedly want to get attention in their suicide attempts. The attempt is a genuine cry for help. Others, however, find themselves in a race against the clock. They must act hastily, because if they don’t, they’ll be discovered, and someone will put an end to their plans to end their life. The odd twist happens when someone who wants to commit suicide tries to accelerate their plans and make it happen now – so they’ll have a greater chance at success.

There are, I’m sure, times when this strategy is effective, and they’re successful in their attempt. This cannot, however, be universal, as those who attempted but failed to commit suicide have explained their attempts to hasten their demise. Clearly, it didn’t work.

Where some linger near the railing, pondering their thoughts of jumping, others leap headlong into the abyss – because being captured and returned to their lives is too unthinkable.

Suicide is death for the person and mutilation for the family. They must suffer through the loss of a part of themselves. This is literally true from a neuro-cognitive standpoint. Every time we lose someone close to us, we lose someone who we depended on for a part of our collective knowledge.

Whether you know someone directly who has attempted suicide or you’re just peripherally aware of the problem, I hope that reading this will be your turning point so that we can prevent more stories like those in Turning Points.