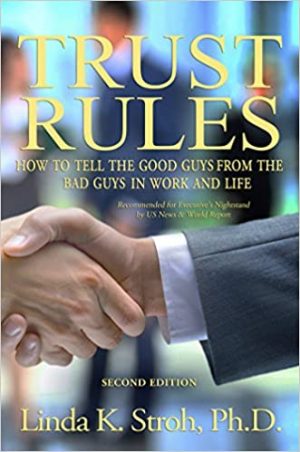 Trust is fundamental. It’s essential. It weaves together not just trust but also trustworthiness and, unfortunately, betrayal. Trust is a bet that the benefits of the trust are going to be more than the cost of betrayal. It’s based on the belief of the other person’s trustworthiness. Like horse race handicappers, we’re constantly looking at other people and judging the degree to which we should trust someone else. It would be a big benefit if we could learn what factors might lead to people being more trustworthy and what things might lead to betrayal. With that information, we can make better decisions about who to trust, to what degree, and when. That’s the root of Trust Rules: How to Tell the Good Guys from the Bad Guys in Work and Life. It’s a guide to knowing when to trust.

Morality in these Times

What would you think if you did a survey that revealed that 60 percent of students had cheated on a test in the past year? Would you conclude, as Michael Josephson, the director of the Josephson Institute of Ethics, that we have a hole in the moral ozone? Would you conclude that we’ve given up honor in the name of expediency? (See Who Am I? and The Normal Personality for more on honor and its opposite.) What can you say about the erosion of trust in people and institutions when the data seems to suggest that the trust isn’t well placed?

One could argue that there’s even less reason to trust in others and the world we think we see around us. Counter arguments are equally easy to make by simply selecting different data points. There’s no chance that a review, or the book itself, could safely settle this issue. However, what the conflicting data can tell you is that in either case we can improve our ability to discern when – and when not – to trust.

The Only Way Out is Through

The first way you can find a trustworthy person is to look for the person who doesn’t steer clear of trouble and instead braces themselves and then tackles the problem directly. Directly confronting problems and accepting the consequences of poor decisions, mistakes, and mishaps is a key characteristic of someone whom you can trust.

It’s simple really. If someone is willing to do the right thing and do the hard work when it really is hard, then the chances that they won’t live up to the trust you place in them is small. It’s still possible that your trust is misplaced, or the struggle will become more than they can cope with; however, it’s less likely than placing trust in someone who isn’t interested in doing the hard work.

The trustworthy person is always seeking to better understand themselves and the world around them. As a result, they accept criticism and seek to use it as fuel to better themselves. That is not to say that they always accept criticism or that the criticism is always warranted. However, a person who is willing to consider the potential validity of the feedback is likely more self-aware and therefore more likely to behave consistently.

Similarly, trustworthy people accept fault. They accept that they’re not perfect and they’ll need to apologize from time to time, not because they’ve intentionally disappointed or harmed someone but because they cannot be perfect. That is not to say that trustworthy people instantly jump to an apology. Trustworthy people focus on understanding the harm before acknowledging their role in it – and carefully avoiding taking responsibility for something that isn’t theirs to own.

For Better or Worse

Have you ever wondered why wedding vows often include the phrase “for better or worse”? There will be good times – times when you want to share the experience with your friends, colleagues, and partner. There will be bad times, too, when you don’t want to share your misery with your friends, colleagues, and partner but when you need them to help support you. Trustworthy people will be there when things are good and when things are bad.

The “for better or worse” language emphasizes the kind of relationship marriage should be – one where the partners can count on one another no matter what happens. The kind of people who remain with you when things are bad – not to share in the joy but also in the burden – are the kind of people to keep around you.

It seems like holding everyone – themselves and all others – accountable might not be a very likeable characteristic and therefore not the kind of thing you’d want to surround yourself with. However, when people are willing to have difficult conversations and hold everyone accountable, they’re willing to be honest with you – and thus more trustworthy.

It’s not that people who hold others accountable are callous or uncaring. They are in fact, quite concerned with how they interact with others. It’s not uncaring, it’s clear. It’s clear where they stand and what they believe. (See No Ego for more.)

If you want to understand more about who to trust – and who not to – you should read Trust Rules and apply a few to your world.