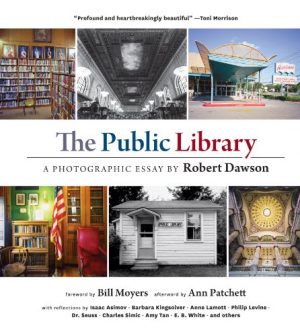 I’ve always had a special place in my heart for libraries. They’re safe places where you can get lost and eventually become found. That’s why when a deal for purchasing The Public Library: A Photographic Essay crossed my path, I decided to pick it up and explore some diversity in public libraries. After all, even though there’s some consistency in the libraries that Carnegie helped to get started, there is a local flavor and character that can’t be captured by visiting just one or two libraries.

The book is the result of a set of road trips designed to visit and capture libraries in pictures. Much like my wife and I have made a point of touring and capturing lighthouses, this is the capture of libraries. While traveling from town to town with camera at the ready, the authors share the diversity of libraries across the US. From the tiny library boxes that grace neighborhoods – including mine – to the massive central libraries of large cities, The Public Library is a tour of the places that people can go to meet with others and elevate themselves through reading.

American’s reading time fell by 50 percent between 1925 and 1995. That’s a startling statistic that makes sense when considered in the context of our consumerism society, with radio, TV, and other options competing for our attention. However, the challenge is that a good reader can read at roughly three times the speed of the spoken word. In short, you can learn more in less time by reading than you can by watching even educational programming.

Reading books also combats the challenge of our interrupt-driven, no concentration, lack of deep thinking world that is emerging. Books demand our full attention where other activities rarely do. Libraries are designed to allow us to take full advantage of the ability to concentrate that books train us how to do.

Libraries, as they often do, adapted to the change by developing mechanisms of sharing books on electronic readers. This allows patrons to share copies of electronic books like they might check out and use a physical book.

Libraries are threatened with death on multiple fronts, as our entertainment options increase and concerns about continue about the transition to electronic books. Certainly, there are communities where libraries are dying – or are dead. The library hours become so constrained that they no longer adequately support the needs of the community and are eventually scuttled.

Libraries are not destined to die. They die when their communities cannot or will not commit the resources to support them. They die when the community can’t see the value that they provide – or that they’re unable to provide. It’s a sad state of affairs when a community abandons its library, because it can feel like it’s abandoning its most vulnerable population.

Libraries are the great equalizer. You’ll find the richest and the poorest together in one space enjoying the fruits that authors have created. Before the invention of the printing press, owning books was something people didn’t aspire to. The Bible was carefully (and sometimes erroneously) copied by hand. (See Misquoting Jesus for more on transcription errors.) Over time, owning books moved from royalty, to nobles, to the wealthy, and finally to the common man. However, even with books getting substantially cheaper, owning your own collection of books is an expensive proposition.

Interestingly, most people don’t read books more than once. They read the book and capture the story or the idea and then set the book aside forever. There’s little value in maintaining ownership. It’s this relatively low-use time that makes books ideal for sharing and the idea of a library one that makes sense.

Some libraries have extended this idea to tools, DVDs, and other resources that aren’t the traditional space of libraries, but they serve the same purpose. They allow many to receive the benefit of the resources that are owned in a shared collective. They remove the separation between those that can afford the tools – including tools of the mind, books – and those that cannot.

Libraries are one of the last non-commercial and non-religious places available to a community. They provide space for people to meet – and sometimes to just get out of the cold or hot weather. They’re places that create the conditions for community. Whether the library provides space for a Pokémon group, a computer club, or another meetup, it helps to strengthen the roots of the community. If you want to understand the roots of the community, it may be that the way to find it is by looking at the dead trees that occupy the bookshelves. It may be that your next step is into The Public Library in the form of a photographic essay.