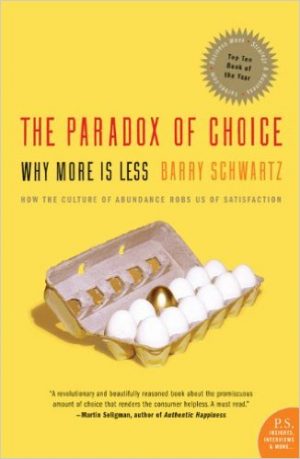 I’m still preparing for the Information Architecture DVD that is forthcoming and I stumbled across a reference to the book The Paradox of Choice: Why Less is More by Barry Schwartz. Honestly, it felt like a reach when it came to preparing for Information Architecture. I didn’t know what to expect I’d learn, however, I was pleasantly surprised at the collection of research and conclusions that seemed to be both counter to general culture and equally aligned with previous reading.

Before I get too far I want to acknowledge that there are tones of Stumbling on Happiness in this book. In much of what The Paradox of Choice is talking about is our overall happiness with choice – and control.

I also wanted to relate a story for which the relevance will become apparent in a moment. Back in 1991, I was very early on in my career. I was going to probably my second conference ever. It was in Boston across the river charles from MIT. It was day three and I was not interested in what was being presented so I wandered for a short walk around the city. I hadn’t ever been to Boston so I figured I could look around, get some exercise, some fresh air, and return to the conference. I started my walk and it wasn’t too long before I stumbled across a young woman with a clipboard. She asked if I would be willing to take a survey. As my mind was focused on MIT across the water, I thought sure. I’ll help out some college student, no problem. Once I agreed she walked me back about a half a block to the Church of Scientology building where they gave me a survey/test. This was at a relative high point in the amount of technical editing I was doing and I had a live-in girlfriend whom I was supporting while she was attending college. During the test I was actually noticing the bias in the questions. I would answer truthfully but I knew that the answers would send the wrong message. They were things like “Do you often criticize, or correct others?” being a technical editor that was part of my work. So I completed the survey in what they said was record time. They scanned in the results and led me to a little room to talk about the results.

One of the first questions was “Do you have any regrets?” The funny thing was, I didn’t and for the most part I don’t today. The thinking which I laid out for the interviewer was that I like who I am. If I like who I am and every experience positive and negative, every choice right or wrong, has made me the way I am. Regret means I would change something but I wouldn’t risk becoming someone I didn’t like to be. You could tell instantly that this put the interviewer off his game. To me at that time it seemed like the only conclusion to be reached but I’ve realized as I’ve grown older that this response is positively uncharacteristic of most people.

What’s the relevance of the story? Well much of the book speaks of our regrets – the opportunity costs of the decisions we make and the psychological impacts of those decisions. There are numerous factors that seem to be at play but how much we regret seems to be an indicator of how happy we’ll be – or not. Less regret = happier people, at least in the over simplified version of the story.

The key premise is built around maximizers and satisficers. Maximizers have to have the “best.” Satisficers have to have “good enough.” We’re all maximizers at times and satisficiers at times. We’ll lament for weeks over the purchase of a car but walk in and buy a computer in the matter of an hour – or vice versa. The key difference is that people who tend to be maximizers more often seem to be less happy – to the point of depression. Schwartz suggests that the opportunity costs – the costs for the decisions not taken – accumulate in our mind and become a burden that must be carried. Please don’t misunderstand. Satisficiers are not without standards it’s just that once those standards are met they make their choice and move on. They don’t have to have the “best” only what meets their standards.

The freedom to chose is also explorer in the book including the fact that most of us want a freedom to choose – that is until we’re actually in the situation. We want to choose as long as we don’t have to live with the consequences of those decisions – and particularly with the wonder about what might have happened if we had chosen the other path. In a world where we have more choice than any other time in history we’re also less happy. Choices can be a good thing – and they’re necessary – but only when they’re constrained in a certain bounds. Consider a post-it note. It has to be sticky enough to stick to the page (enough choices to feel like there are choices) but not so sticky that when removed it will rip off the page (so many choices that you feel burdened).

Choice is necessary so that we can feel some measure of control. If we don’t feel like we have control we may develop a learned helplessness. In the language of the book The Time Paradox this would be a fatalistic view of the world – one that’s learned by events. If we believe that we’re helpless we’ll stop taking responsibility for ourselves – and more importantly for making our condition better. The feeling of helplessness can not exist together with happiness.

I want to end by recounting the 10 steps at the end of the book intended to help you get more happiness out of your life. The parenthetical statements are mine:

The Paradox of Choice is a great book – particularly if you want to figure out how to be happier in life. It’s also useful in understanding how to lay out choices for others as in the case of an information architecture.