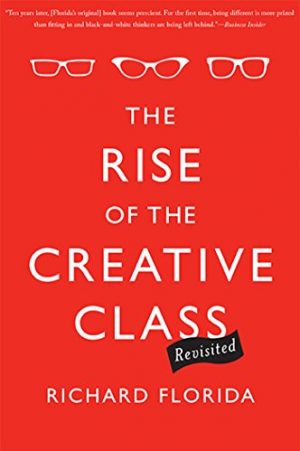 There have been references spread out through many of the books that I’ve read to Richard Florida and his estimates of the number of “creatives,” people who work creatively every day. These references come back to the original version of The Rise of the Creative Class: Revisited. The original version of the book was published in 2002, and the revision came 10 years later. It’s a classic book in more than just the sense that it’s old. It’s classic in that it transformed the way that business leaders and civic planners thought about industries and economies.

Being creative is important, because the way that you motivate creative people is different (see Drive for more). Creatives impact the economy differently. They’re simply different than the kinds of people that our ancestors were and how they worked, and these differences matter.

Before we get too far, it’s important to note that we’re all creative. It’s not like some of us have a creative gene and some do not. Creative Confidence argues that, at some level, we’ve pushed this creativity from ourselves by increasing fear and reducing safety. However, whether driven away or not, it remains as a core part of our being.

The Rise of the Creative Class is neither an anthem about how creative people should rise up and take over the country, nor is it an attempt to define a privileged few who should be given more opportunities, more latitude, or more of anything. Instead, it’s an attempt to understand the social dynamics that come into play in economies. Florida is a student and scholar of economics and sociology. The Rise of the Creative Class is an expression of understanding about how we’re changing as a society and how that impacts economies.

Fundamental to Florida’s view is that innovation is necessary for today’s economic world. Simply doing the same things that we’ve always done won’t cut it any longer. Innovation allows us to radically change the way that we’re doing things – hopefully for the better. This innovation requires diversity. Here, Florida means more than just diversity in the sense we think of it today. It’s more than just including women or other races. By diversity, he means also inclusiveness and tolerance. That means for those who don’t look like we do, who don’t believe like we do, and who don’t think like we do. The Difference points out that this leads to a greater diversity of thought – and, ultimately, more productive teams. At least, if they can get past the storming phase of team development.

Innovation is the result of the right conditions. Conditions of psychological safety and diversity of thought that allows multiple different perspectives and ideas to combine in new and interesting ways. Innovation isn’t created by diversity, and more than bread is created by flour, eggs, yeast, and sugar. However, unlike bread-making, putting the right ingredients in the right place allows for the emergence of something new.

Life was harsh. While today, we speak of corporate jungles, rat races, and constant pressure, our ancestors had the real struggles. Death was a constant and unwanted companion. Disease lead to death. Accidents lead to death. Starvation was a very real concern for many people.

Today, as I write this, I’m on an unstructured vacation in Maine. We don’t know where we’re eating or staying, but thus far it has just worked out OK. We have no real concerns about going hungry. We didn’t pack provisions to ensure that we’d have something to eat. Nor did we worry about packing a tent in case there were no hotel rooms available. Our GPS guides us to our next destination. (We’re up looking at lighthouses.) Our car goes until we refill the tank with gas. Our cell phones are ever-present tools for looking at maps, looking up resources, and connecting with friends.

From a material world, things have changed in the last century or so such that working for our material needs – to stave off the specter of death – has largely disappeared. Social programs and broader opportunity mean that material needs are not a problem for a majority of us today. (For those few that remain, I hope that the future where this is not a struggle finds you soon.)

What has replaced the material struggle has been a psychological struggle. Instead of addressing the lowest levels of needs, we’ve stepped back into the ideals that the founding fathers of America expressed in the declaration of independence – life, liberty, and the pursuit of happiness. Though radical for 1776, these are ideas that we accept as basic human rights today. Gradually, we’ve moved from a life filled with toil to survive to a life that is expected to provide us happiness.

We’re moving from a materialistic society, where the material goods are scarce and prized, to one where belonging, self-actualization, and quality are the goal. We’re already seeing how people are seeking experiences over things. Millennials are choosing to delay the status symbols of stability and success such as home ownership and marriage to afford (or finance) experiences.

Large organizations are beginning to realize the need to embrace the changing perspectives of workers. Instead of chasing the latest tax incentive or highway interchange, they’re chasing the people, and the people are chasing experiences that pull them towards natural resources and beauty. Finding talented workers has become the big challenge in organizations today. People drive organizations, and we realize that having the best people – whatever that means – is essential. Without dipping our toes into leadership too far, “the right people” means people who can work together to drive the business forward – whether at the direction of a leader or not.

In the past, finding work was difficult and essential. Unemployment rates hover below 5% – and have for a long period of time. One must wonder how low this rate can get and how long it can stay there. Certainly, there are many components to unemployment and many people who are still looking for meaningful work; however, unemployment rates are changing the way that organizations are hiring. They know that they must attract employees as much as employees must attract employers. That’s a relatively new phenomenon.

Employees used to value security. Working for a large organization used to be a golden ticket. You would work for the company, and the company would take care of you. However, the contract changed. (See America’s Generations.) Organizations couldn’t bear the load of all the people on their payrolls and purged. Children growing up during this time became disenfranchised with large organizations and the illusion of safety. Instead, they decided to rely upon themselves – and a greatly improved market in which they could market themselves. Suddenly, security was in what they could do.

The result is what has sometimes been called the “gig economy.” Earning is spread out and diffuse between different employer/customers. The kinds of projects that people do are sometimes diverse as well. Someone might do baby-sitting or house-sitting and drive for Uber or Lyft when things are slow or when they have a few minutes. Somehow, they piece enough money together to make it all work, even if it’s unclear – even to them – how that might happen.

The other side of this change is a new freedom to accept the jobs that you want and to pass on those that you don’t. The transaction between an employer (or really customer) and the worker is transactional and temporary. It’s a “gig.”

We could debate the benefits and weaknesses to the employees of this new creative “gig” economy, but there’s another side as well. The employers get more agility, because they can terminate contracts quickly and reduce their burden – something not practically possible with employees. But at what cost? Freelance contractors can move from one organization to another inside of an industry spreading know-how to your competitor. (See Sharing Hidden Know How for more on how this knowledge sharing is supposed to work inside of an organization.)

Similarly, retaining the knowledge of how to do things becomes harder when the employee that knows the critical information isn’t an employee any longer but is instead a contractor. While organizations struggle to keep knowledge from being lost, the use of freelance contractors increases turnover and makes the problem of knowledge management even more challenging. (See Lost Knowledge for some tools on minimizing knowledge loss.)

The problem with a bunch of freedom-loving, diverse-thinking folks is that getting them to see themselves as a cohesive group isn’t easy. Developers and artists don’t perceive themselves to be the same, though their work styles and need for creativity may very well align perfectly. The solo entrepreneurs who work for themselves may or may not be creative – but they’re unlikely to see themselves as part of a broader movement beyond their chosen industry. (See The E-Myth Revisited for more about solo entrepreneurs.)

People don’t unite in their home offices – they’re separated by them. We’ve taken away personal contact on multiple levels. (See Alone Together for more about how we’re using technology as a proxy for real connections.) It takes more than just a home office and a temporary badge to make the “gig” living work – but many are doing just that. Sadly, few are connecting with others even in their own industry.

As a result, it’s unlikely that creatives will find their way into a union or a cooperative. Instead, they’re likely to operate independently in the shared space of the economy. It’s more like an antique shop that has many different vendors who share the burden of the infrastructure but set their own pricing and rules.

There is some intolerance that seems to be helpful still. That is intolerance of mediocrity. Finding a desire to have excellence in whatever you do is a needed component as well. (See Peak for how to become the best and continue pushing to be better.)

So, on the one hand, you must create conditions of tolerance and acceptance of other people (see How to Be an Adult in Relationships for more on acceptance), and on the other hand, you must desire to not accept OK as good enough. (See Good to Great on more about how good can be the enemy of great.)

I’m not an economist. I don’t work for the government trying to plan how to grow the economy. So, for me, the rigor of statistical analysis is lost. Whether it’s Florida’s Bohemian-Gay index or a Global Creativity Index or something else entirely isn’t really that important to me. What’s important is that we’re changing as a society. We’re moving from one corporate job to a creative economy driven by gigs that may not last that long. It’s a view that allows us to become more fully ourselves and to accept greater levels of risk. I don’t believe that we’ll ever see a movement in the creative class – however, I do believe that, if you’re someone who does anything creative, you might want to read The Rise of the Creative Class to understand what’s happening in society and, perhaps more importantly, what’s happening inside your own head.