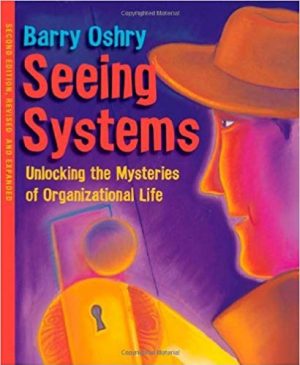 Sometimes the people I speak with look at me funny. They tilt their head just a bit and wonder how I’m looking at problems. I know that I see things differently, but it’s normal to me. Seeing Systems: Unlocking the Mysteries of Organizational Life seeks to help everyone see things a bit differently. Instead of blaming people for the problems we encounter, the goal is to expose that many of the problems we see are natural outcomes of the systems we create.

One of the reasons I see things differently than others is because I see things in systems. It’s stocks and flows. It’s things that happen as a natural result of other places in the system. It’s also seeing bottlenecks and areas where the system itself can’t adapt. It’s less about the answer today, and it’s more about the process that led to the answer, so I can see if the answer will be the same tomorrow.

When you learn to think in (or see) systems, you learn to wonder what’s next. You begin to look for the situations where the results you’re seeing no longer apply. While it’s doubtful you’ll ever be able to predict every outcome because the systems are too complex, you can often begin to see what might come next – and ways that you can break the chain and cause the system to stop behaving in a bad way. (See Thinking in Systems for much more about systems thinking.)

We tend to think about both people and systems as being good or bad. However, it’s more about whether the system is a good fit for the need or not. A battleship is a great solution to a sea-to-sea conflict but poor at a sea-to-land attack. Battleships are big ships, and they can’t get close enough to the shore to attack targets that are inland. Aircraft carriers and the planes they support are good for sea-to-land attacks (through the intermediary step of air-to-land) but are vulnerable due to their size and inability to protect themselves from attack at sea. It’s not that one is better than the other, it’s that one is more suited to the task than another.

We need to step away from the idea that something is good or bad and instead look for fit and interactions. Systems – including organizations – can be good for society, good for customers, and good for employees – or good at only some of these.

As a quick aside, Nassim Taleb argues in The Black Swan and Antifragile that we optimize redundancy out of systems so we can enhance our gains but leave ourselves susceptible to naturally occurring forces that can take the system out of balance. It’s important to realize that short-term productivity of a system isn’t the only measure we should be watching. Resilience and the ability to cope with stress is important too. (See Collaborative Intelligence for more on different kinds of measures of productivity.)

It’s natural. We have a natural bias – called the fundamental attribution error – to see negative outcomes as the result of people rather than as a natural result of the system they’re in. (See Thinking, Fast and Slow for more on fundamental attribution error.) Kurt Lewin said that all behavior is a function of both person and environment. When we’re speaking of our own poor behaviors, we attribute them to the environment. When we’re speaking of others’, we tend to attribute them to their character. While this is natural, that doesn’t make it desirable.

When we’re trapped in corporate systems, we tend to blame others for our chronic frustrations. Instead of looking at the system and seeing the situation as a natural outcome, we perceive that someone must be doing something wrong. Consider walking into an emergency room and finding out that the wait to see a doctor is four hours. You might, quite naturally, be frustrated because of the wait – particularly when you’re feeling bad enough that you’ve decided to go to the emergency room. The problem is that this is – occasionally – the natural result of the system that seeks to optimize the utilization of resources, including doctors and nurses.

In an unconstrained system, there would be a doctor available immediately for every need. However, this is entirely impractical. In an ideal situation, there would be room for everyone to stay in a city for the big game. But to build such capacity would require that it’s unused most of the time, and that would not be financially viable. The point is that every system has a set of constraints that allow it to continue to operate – even if those constraints are occasionally personally painful.

We blame the power-hungry CEOs who don’t allow enough capacity while simultaneously investing in healthcare stocks and demanding an above average return. The truth is that the CEO may be power-hungry, but it doesn’t mean there wouldn’t still be a four-hour wait if they weren’t. We can, if we choose, attribute the negative circumstances in a system to a person, but often there’s no person who should receive the blame.

Giving in to our natural biases and failing to recognize that the system we’re operating in leads us to bad results is our blind reflex. It’s the default settings for us as humans. When we’re faced with a situation that has us feeling misunderstood and with a lack of control, we’ll feel as if the management is out to get us. The view from the CEO’s desk is one of failures and non-compliance rather than an understanding of the complexity of the system and the inevitability of details and challenges.

To be able to change the system, to make the outcomes better, we need to be able to see the systems we’re operating in and how those systems don’t always work the way we want them to work. In short, we need to find a way to stand outside of the system long enough to see what’s happening inside the system.

Standing Outside the System

It sure would be easier to see the forest if there weren’t so many trees in the way. When you stand too close to a problem, you simply can’t become detached or take a step back far enough to see the bigger picture. That’s the fundamental problem with most organizations. We can’t get enough distance or safety to really evaluate it. (See The Fearless Organization for more about the role of safety in organizations.)

In the workshops that Barry Oshry and those certified through his company Power and Systems runs, this distance is explicitly created for everyone through “time out of time” portions of the program (called “toots”). This when everyone is encouraged to share their experience of the workshop, particularly their role in the fictitious organization they’re a part of. This is purposeful reflection that is designed to give the members of the system the space they need to see what’s happening.

In fact, the workshop itself is designed to be a microcosm of what happens in a real organization, and therefore make the patterns more observable, just like we would run a small-scale experiment to confirm something we think we’re seeing in the world at large. When the workshops are run at full scale, there are ethnographers. They’re people whose role it is to document what happens and the background behind each decision. While ethnography is most commonly associated with anthropology and the understanding of different societies, it’s strangely appropriate to the micro-society that’s created in the small organization. (See The Ethnographic Interview for more about the ethnographic process.)

The ethnography serves to provide the context and history across the organization. Ethnographers are silent while the system is running but provide a method of storytelling during the after-action review that helps to understand why and how the system became so dysfunctional. (All systems become dysfunctional.)

It’s entirely predictable. The C-suite is going to feel burdened and overwhelmed. The middle managers (including VPs, directors, managers, and supervisors) are going to feel torn. They feel powerless to influence the C-suite or protect their workers. The workers are going to feel oppressed. Why? Because that’s the pressure the system puts on them.

The workers can not see the reason behind the rules. They don’t understand what value others are adding – particularly when they are doing all the work. (See The E Myth: Revisited if you’d like to see the natural outcome for bottom level workers who aren’t risk adverse.)

Managers feel like the C-suite doesn’t understand the work being done or the needs of the workers, nor do they feel the workers understand their plight. The C-suite wonders why people just can’t do what they ask. If everyone would just do what the C-suite says, then everything would be good. Instead, they feel like they’re spending all their time dealing with the problems when workers or managers aren’t doing their job.

Of course, the best possible answer is to move past these predictable responses to more enlightened responses, which accept individualization and integration (see How to Be an Adult in Relationships for more about acceptance). Instead of seeing one extreme or the other as the only approach, the enlightened view is to see that it’s a continuum, and both extremes are needed at different times and in different amounts. It’s a perspective of wholeness that acknowledges all is needed – not just some.

Amazing things happen when people accept responsibility for their role in a system and either amplify or dampen the natural effects. The system reaches dynamic stability or harmony more easily when the culture encourages personal responsibility. It’s easier for humans to forgive when the other humans in the system apologize. When, instead, people dig into their position of righteousness, the system destabilizes and creates pain more quickly.

To get to the amazing, unpredictable result, we must be able to step beyond the invisible walls that confine us to our preconceived roles and behaviors. It’s hard to step out in courage into new spaces, to adapt the system to be a better fit to the conditions and reduce the suffering of everyone in the system, but it’s worth it.

If we get really good at Seeing Systems, we don’t need the workshops to find our path to the amazing, unpredictable future.