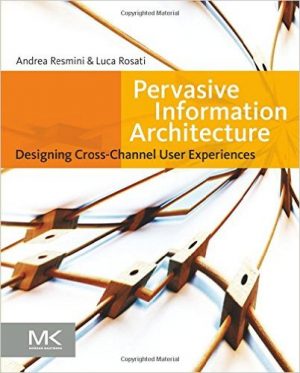 I view Information Architecture (IA) as the organization of information around you. I picked up Pervasive Information Architecture: Designing Cross-Channel User Experiences because I wanted to see how others thought about the problem of keeping messages consistent. In what I’m trying to do I was less concerned about eCommerce / brick-and-mortar mixtures of experiences – which the book spends a great deal of time on – rather I was more interested in how our experience on our desktop, on our phone, and on our bookshelf impacted the way we should think about information architecture.

There were lots of little snippets, shifts in perspective, that I loved in the book. Simply considering whether IA is about what’s on the pages or the connections between the pages is an interesting bit. It ties in visual design and what I consider to be true IA. I tend to think of navigation flowing from IA – however, I recognize that the reverse is also true. The ability to leverage different navigational techniques informs and shapes the IA. It was good to see this played out well.

There were also bits where reality was revealed. For instance, I’ve often said that Architect comes from the Greek and a literal translation leads to “Chief Builder” – which is true. However, Architects don’t build buildings. They don’t swing a hammer. They give instructions to others who build the buildings.

The book also works on the topic of whether IA is an art or a science – or as I would contend both. As I mentioned in Apprentice, Journeyman, Master, knowledge can be intellectual (cognitive) or tacit. There’s a similar situation with IA. Understanding the rules is relatively simple. Understanding what the important bits are takes experience. (See Sources of Power – How People Make Decisions)

There are some core IA things which are useful as well. Particularly things like how we break things apart. For instance, the applicability of Hick’s Law (which says that people can pick things out of longer lists quicker than two picks of lists that are half the size.) The trick is that this relies on our ability to see and understand the order of a large list. We use the order to rule out entire categories of the list at one time. This explains why understanding the magic number seven is still important. (Hint: We chunk concepts together in our mind to save working space.)

Moving further down the path of organization and chunking the book talks about the use of prototypes – that is a representation of the category/words we’re seeing so that we can conceptualize it. Some items are better prototypes – and thus easier for us to associate to a category than others. For instance, if you’re looking for a rug there’s little question that the furniture category is what you want. If you’re looking for a rug the association is much weaker. Further there’s some interesting conversation about which attribute “wins” when two attributes of an object are in conflict.

Consider a pink truck. Is the truck generally gender male or gender female? As it turns out, pinkness overrides truck-ness. (My son once wanted a pink rubber band revolver much to my dismay. However, it turns out his mother despises pink so much that I’m rationalizing he was just trying to annoy her.)

I’ve also adopted a new name for topics that don’t fit neatly into an IA. The name is platypus. In science the platypus is an interesting mix of things reptilian, avian, and mammalian. So I’ve decided to start calling the things that don’t want to organize themselves into neat categories as platypus – if for no other reason than you can’t help smiling when you say it. (Try to think of someone saying platypus without smiling at least a little.)

I also got to think about how a vocabulary (and thus IA) are different based on the knowledge of the consumers. For instance, the general public may think of planes, where as I think about how they’re propelled… single, twin, multiple engine… normally asperated, fuel injected, turbo charged, or turbine. I think of tricycle gear, tail wheel (tail dragger)… The more you know about something the more detail your vocabulary.

Oh, then there’s the scary. Marcia Bates apparently believes that 80% of our knowledge is absorbed by us just being around. Only 1% of what we know is found when we’re actively looking for it. That explains why experience with an IA has value. Of course it doesn’t bode well for trying to do a new IA.

Pervasive Information Architecture is a good journey for how IA exists – or should exist – in a world where users won’t experience your IA in a single dimension. Pick it up if you’re looking to figure out how to integrate other channels into your IA.