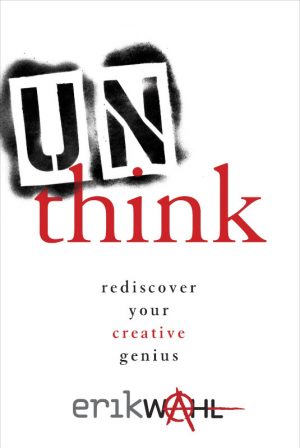 Somewhere deep in the recesses of our mind are the recesses from our grade school. Buried by decades of cruft, these memories and others call us back to the state that we had back then when we knew we were creative. It’s a time that we knew we were creative, before we got tied up with how others view us and before the need to be productive and rational. This is the place of Unthink: Rediscover Your Creative Genius.

Claude Baudelaire wrote once, “Genius is the capacity to retrieve childhood at will.” Perhaps that’s why it’s no wonder that Einstein considered his genius the result of remaining childlike into his adult life.

Children learn differently than adults. That’s the primary premise of The Adult Learner. It’s not just that adults have more complex mental models (see The Art of Explanation), adults fundamentally learn differently. The neurology of our brain has changed, and we’re not forming the number of new neural connections that we did as a child. However, more importantly, we’ve developed a usefulness filter for what we learn.

Somewhere along the line, we got exposed to so much information that a switch flipped, and we started filtering what we learned. (See The Information Diet and The Organized Mind for more on the information overload world we live in today.) The switch that flipped made us more discerning consumers of information. Instead of learning everything, we learned that there were things that we didn’t need to know. We didn’t need to know the number of atoms in a liter of gas at standard pressure. We’d look it up when we needed it – or, in today’s terms, we’d just google it.

So, quite literally, we filter everything coming into our brain for awareness – to fight information overload – and for retention to see if we need to reserve precious brain space for the information, or if we can look up the information again when we need it next. That’s different than what we did as children when everything was interesting.

I can remember playing with paper clips and rubber bands just to see how they work – well, in truth, just to be fiddling with something. It’s been a long time since those days. Now, it seems like everything that I’m working on has some productive or at least semi-productive reason for being.

Too many people have books which are screaming to get out. Too many people want to be more than they are today. Edgar Lee Masters, a poet, laments, “Ambition called to me, but I dreaded the chances. Yet all the while I hungered for meaning in my life.” (See Start with Why and How Will You Measure Your Life? for more on finding purpose.) The problem with ambition, with the desire to be greater, is that, if you try, you’ll know for sure if you can make it – or not.

In How to Be Yourself, I shared the awareness that it’s easier to project a false image than to be real. Being real means that when you’re rejected you’re really rejected. Ambition is the same thing. You don’t have to face your ego if you don’t try. Try and fail, and there’s a reconciliation that must happen with the ego to figure out why you didn’t achieve your goals. But if you don’t try, there’s no hard conversations to have with yourself. (See Change or Die for more on your ego.)

Masters concludes, “To put meaning in one’s life may end in madness, but life without meaning is the torture of restlessness and vague desire – it is a boat longing for the sea and yet afraid.”

There’s a crisis in boardrooms across the country. The crisis isn’t capital. The crisis isn’t communication. The crisis is creativity. Following the rules, being in fear of the next layoff has driven creativity out of the corporate culture, and it may be exactly the thing that organizations need to survive. (See Drivers for Conformity and Originality for more.)

IBM chief executives found that they believed the critical activities for the future included taking balanced risks, considering unheard-of ways, comfort with ambiguity, courage, and different assumptions. These skills are the heart of creativity, and they’re missing.

Creativity springs from safety, as Creative Confidence compellingly explains. The rounds of cutbacks. The layoffs and restructurings in corporate America have left employees shell-shocked in their own form of post-traumatic stress disorder that has them walking from meeting to meeting like zombies awaiting the zombie apocalypse.

Beyond creating safety to try and fail, there are other tools that you can use to encourage creativity. If you’re willing to do the things that you least like to do – in service of important goals or responsibilities – you’ll put your brain on tilt and typically generate unique ideas.

Originals explains that it’s quantity that produces quality. That the best works of artists have come in the periods of their greatest productivity. We can get more creativity by creating more opportunities to produce – without pressing so hard that there is stress on the deadline.

Creativity comes from curiosity. It comes from “can I do that?”, “how did they do that?”, and “what’s making that happen?” If you can instill a sense of curiosity in yourself, you’ll find that you’ve recaptured a bit of your childhood and have opened the door to creativity.

Standing strong against the winds of conformity requires strength. It’s a strength of character that’s rare. When confronted with someone who exhibits character, most people generate respect for that person – even when that person has diametrically opposing views. You can appreciate the conviction of someone’s beliefs whether you agree or not. In fact, this respect is the way that things used to be done.

Before the digital age, when we’re fascinated with the latest tweet about a ham sandwich, the latest Instagram picture of the ham sandwich, and the Facebook post about how you had a ham sandwich two years ago, we used to watch behaviors over a long time. We’d see how people acted when people weren’t watching and use this to judge their character. Now we can see people become popular because of one post. We don’t assume that people aren’t watching, because we know they always are.

We used to have to have conviction to develop a reputation. Today, it is all too easy to manipulate the news stream to capitalize on a meme, someone else’s post, or some passing fad. We don’t build respect that same way that we used to.

The people that we used to learn to respect had one thing on their heart. It was something that they cared deeply for and for which they were willing to toil and sacrifice for. No more.

It was Solomon Asch who was curious about conformity and why people would give up their perceptions for the perceptions of others. In an ingenious experiment, he filled a room with test subjects and collaborators. When the collaborators answered truthfully about the length of line that matched the length of line they were still seeing as a reference, the subjects answered truthfully. As he added collaborators that spoke the wrong answer, he found that his subjects would report the wrong answer like the others had given. This progressed from some of the time to over 75 percent conformity at least once with three collaborators or more answering incorrectly.

Closing in on Creativity

I have no way of knowing what is blocking your creativity. For me, I know there’s a part of it that’s the logical sequential thinking that was the start of my career as a developer. Allowing free thinking isn’t always easy for me. Being unproductive feels like a waste. However, sometimes I need to Unthink. Maybe you do too.