The Art of Explanation 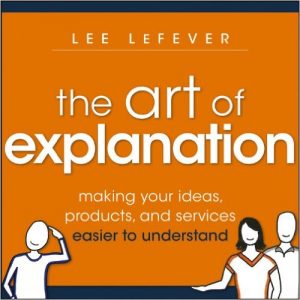 Many, many moons ago. My guess is about 20 years ago, I was a LAN manager for a manufacturer. I was the guy that got to go solve the problems that others couldn’t solve. In the age when the Internet wasn’t commercial yet and email was truly store and forward. I got called to help the sales secretary with something – I don’t remember what. I do, however, remember being very frustrated and coming back to my boss at the time. He said something that has never left me. He said “Rob, you were trying to teach her why it worked and all she wanted to know was how to make it work.” For me, I really want to build the mental models that Gary Klein talks about in Sources of Power. I want to understand how the pieces work. However, many people just want to do whatever it is so they can get on with their “real” work. I can try to explain how something works – and the person I’m talking to doesn’t want to know.

The book starts by describing that people who don’t know much need to know “Why” and the more they know they cross over into wanting to know “how.” That isn’t new if you’ve ready about The Adult Learner. One of the clarifications that I believe is important – that the book leaves out – is that it’s just the “Why I care” and not “why it works that way”. Similarly, there’s the “How do I do it” – and not the “how it works.” For the most part, people don’t care how it works – or why it works that way these days.

The Art of Explanation also speaks of how you can’t really understand the trees until you’ve seen the forest. You have to have a context to place the idea in or you won’t be able to remember it. That’s one of the reasons why explanations are not facts. Facts exist without context. To be good at explaining, you have to provide some context.

Interestingly, Efficiency in Learning says that you should “Teach System Components before Teaching the Full Process.” (Guideline 13). This would seem to imply that teaching the trees before teaching the forest is appropriate, however, the kinds of information are different.

Consider the movie the Karate Kid. One could say that “Daniel” was taught karate through the fundamentals. However, there’s a difference. “Daniel” was motivated to work towards a goal. He understood the forest. He knew where he wanted to be. Once he had that vision and the desire to get there, he needed the fundamentals taught to him. In effect “Daniel” had already received the “Why” – he already cared because he didn’t want to be bullied any longer.

From a learning standpoint, he was taught the fundamental moves – and then he was taught (very quickly in movie-time) how to apply those fundamentals to the appropriate situation. This hints at another aspect that the book makes clear, through a quote from Robert McKee’s book Story. “Anxious, inexperienced writers obey rules, unschooled writers break rules. Artists master the form.” This reminded me of my blog post Apprentice, Journeyman, Master. (In which I speak of another aspect of the Karate Kid movie.) In other words, we need to have a way to explain the basics. The rules. The foundation. Then we need to learn the principles behind the rules and know when to break the rules to stay in alignment with the principles.

Pervasive Information Architecture pointed out that we grasp the abstract through means of the concrete. That would seem to imply that we should provide concrete examples of everything – which is hard to do when explaining the forest, however, I believe they’re talking about two different points in the learning process. The first point is where the person doesn’t know why they need to know or why they care. (The learner’s need to know from The Adult Learner.) In most explanations the audience doesn’t know why they need to know – or at least they don’t know why precisely. They key point is to help folks see the broad environment when they’ll be working – before getting to the detailed specifics – the trees of the situation.

My point in raising potential objections to talking about the forest first is to show that they’re less about objections – and more about just slightly different views of the problem.

The Art of Explanation talks about how context is important – if content is king then context is the kingdom. The funny thing is that it also talks about recipes and the fact that they don’t need context. They’re designed specifically to be context-less. That’s actually the core idea behind the Shepherd’s Guide. It’s a set of recipes for getting things done with SharePoint. The context of the comments we read, the perspective they’re coming from is a core part of the message. The information that applies to one person in their situation – their context – can be completely inappropriate to another person in a different situation.

Thinking, Fast and Slow talked to the way that people think – and how we feel. The Art of Explanation makes the point that you want to help people get their mind into the story of what’s happening. You want them to feel the pain of the actor in the story. I know from my work writing marketing copy that only writing to the intellectual and rational doesn’t work. We need to speak to the elephant as well as the rider. (See Switch and The Happiness Hypothesis.)

Then there is the curse of knowledge. That is, the more you know about something the harder it is to explain it to others. Of course Einstein said “If you can’t explain it simply, you don’t understand it well enough.” I think he was talking about the folks who like to pretend they know something but then can’t explain it – mostly the more you know about a subject the less that you can remember what it was like to know nothing. (Back to Thinking, Fast and Slow and what you see is all there is.)

Before getting to the concrete tips from the book (blended with my thoughts), I need to rewind one last time and talk about how the features of something aren’t equivalent to its utility. Diffusion of Innovations makes it clear that the consequences of an innovation are difficult to predict. Similarly, it’s hard to explain how a tablet will be used. Enumerating it’s weight and battery life don’t communicate to you that it’s a great consumption device for browsing the web and reading books – the features (lightweight and long battery life) don’t automatically convert to how someone can use it.

The Art of Explanation considers these the key components of a good explanation:

The book also talks about the different mediums and their suitability of differing explanations. I’ve adapted this information into table form.

The Art of Explanation is a great book – if you want to learn how to explain things better.