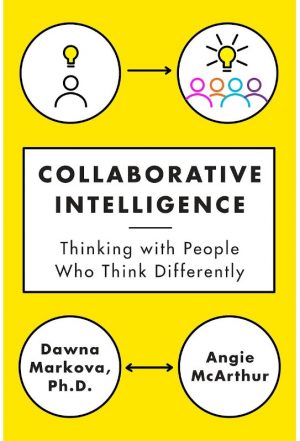 No one is as smart as all of us – sometimes that’s very true and sometimes not. What makes people work together in a way where all their talents are expanded instead of diminished? That’s the idea behind Collaborative Intelligence: Thinking with People Who Think Differently. It’s another tome in the quest to find the best way to work with one another.

At the heart of working with others is the capacity to leverage their strengths to make your weaknesses irrelevant. Much of that is understanding how to identify the best ways to work with others and to leverage their strengths. This is the same kind of idea that Liz Wiseman applies to Multipliers, those managers who bring out the best in others. However, it applies to team members as well as managers.

Much of being effective at working with others is in figuring out how they think differently and how to communicate across the void.

I had challenges with Collaborative Intelligence because much of the “research” that they claimed to have done was either built on myth or not done at all. The fundamentals behind different learning styles – as the kinesthetic, auditory, and visual – come from Edgar Dale’s “cone of experience.” Originally proposed as a framework, it was given some false retention percentages and became dubbed official. However, Dale never put percentages down – everything that’s here is false. (See our white paper “Measuring Learning Effectiveness” for more.)

Even though this breakdown is on such an insecure foundation, there does seem to be some evidence that people do have preferential learning styles. However, it’s unclear whether these are differences in cognitive approaches or if they’re just preferred learning styles.

I found the sorting that Collaborative Intelligence tried to do between these styles not helpful. The questions misidentified me as a kinesthetic thinker, when I’m – in actuality – a very highly visual learner.

The second breakdown are what Collaborative Intelligence calls “thinking patterns”. The book admits to adapting the strengths from Gallup’s Strengths Finder and using them in their model. They put in much from Gallup and a bit from a guy named Ned Herrmann.

Generally, I found the Gallup approach to be more clear and useful, but in one way, these thinking patterns were useful. Gallup communicates from strengths and misses – I feel – how these strengths can become liabilities. Collaborative Intelligence makes a point of saying what these strengths look like when viewed as weaknesses.

This is reminiscent of the Enneagram (see Personality Types: Using the Enneagram for Self-Discovery), in that the Enneagram speaks of levels of effectiveness. You can be wired in a way and be highly functional – or you can be very dysfunctional. Knowing how to identify strengths in yourself and others and then realizing when those strengths aren’t being used effectively is powerful in building relationships.

While the subtitle conveys that the book will teach skills to work with people who think differently than you, the reality is that the book stops well and truly short of giving you useful strategies. It does communicate differences, but not what to do about them. Dialogue points to the three languages that people use – power, meaning, feeling – which is practical, because you can choose to communicate in a way that addresses all three of these primary communication needs.

At some level, I’m sure that folks are going to feel like I’m nit-picking with Collaborative Intelligence by mentioning this, but it’s important to me that we use the right terms to speak about things. The book shares the things that positively and negatively influence folks with various thinking styles. Over simplifying – and using the Myers-Briggs Type Indicator – if you approach a feeling person with thinking or vice-versa, there’s bound to be some friction. That’s negative influence. Conversely, when you encounter others with your thinking style, it’s frequently a very positive experience.

My issue comes from the language. For positive, they use “lights you up,” and for negative, they use “burns you out.” Except it doesn’t burn you out. Burnout is feeling like nothing is ever changing, that your situation won’t improve, and the resistance you’re currently seeing will be the same resistance you’ll get forever. It was 2003 when I wrote the article Tips for identifying burnout in yourself and your staff. The same year, I wrote Talking Shop: Breaking out of burnout mode at work.

In those articles I lay out what burnout is, how to identify it, and what to do about it. It frustrates me when there’s a whole language (a non-trivial amount of the content) that is delivered with language that isn’t consistent with the message they’re trying to send.

By now, it’s probably clear that Collaborative Intelligence wasn’t my favorite book. There are too many places where it’s sloppy, built on poor foundation, or uses the wrong terminology. However, there is one hidden gem that I think everyone needs to know about. That is, you should choose a communication strategy that addresses the needs of everyone in the room. I often find myself doing one to two sentences in my responses that are targeted at different people in the room – to ensure to them that I did hear them, and I appreciate their concerns.

So while I can’t necessarily recommend that people read Collaborative Intelligence, there are many places where I believe the concepts are the right concepts to think about – they’re just not always delivered “right.”