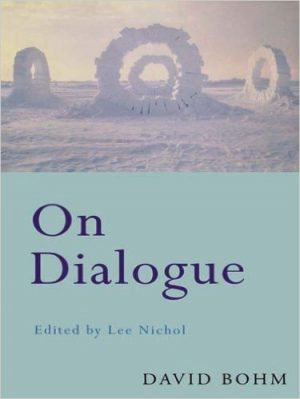 What does a physicist have to say about dialogue? It turns out, if that physicist is David Bohm, a lot. Bohm’s work has been referenced from six of the books that I’ve already reviewed (Science and Pseudoscience in Clinical Psychology,  Dialogue: The Art of Thinking Together, My Spiritual Journey, Theory U, Sharing Hidden Know-How, and The Fifth Discipline). So despite the relative difficulty to unfold what Bohm has said, On Dialogue has a lot to say.

When it comes to being aligned – or coherent – there is a lot of room for improvement. I often use the illustration of what happens when you start with a lantern that can generate light for maybe 30 yards. From there, we as a human race created lighthouses with their Fresnel lenses which focused light along the horizon. Lighthouses could push light out 26 nautical miles. Admittedly there was more power in the light –not proportionally more power, but some more power. Today we have lasers that we can use to bounce light off the moon – substantially further than 26 nautical miles – but with less power than in a typical lighthouse light. It’s all a matter of coherence, the degree to which things are aligned. The more aligned things are; the less power is needed to do the same thing.

The problem is that incoherence is the default of the universe. Chaos is the cosmic currency. Coherence happens but it’s not easy. This is where dialogue comes in. Dialogue is the mechanism by which we seek to introduce coherence in our relationships with others. By neither wielding power nor cowering behind our need for safety, we can find a balance where we’re able to more clearly understand perspectives and values that are not our own.

A mirage is just a shimmering image of falsehood but it’s one that we believe. Incognito went to great lengths to explain the ways which our own brain deceives us. All the way down to the very root of perception, what we believe is a fiction created in our minds. While we’ve got the most complex and sophisticated set of neurological pathways that Mother Nature has ever created, it’s all built on a fundamental set of lies that we are seeing reality correctly. Even properly formed expectations from those perceptions can be – and often are – wrong.

Gary Klein spoke of “recognition primed decisions” in Sources of Power in the context of fire commanders making decisions about how to fight a fire, but we use the same mechanisms when we’re interacting with other people. We build models of the people that we’re interacting with (like one based on Reiss’ work in Who Am I?). These models lead us to assumptions about what other peoples’ concerns are and how they’ll behave based on those concerns.

The challenge is that the models that we use are never complete enough to perfectly predict the behavior of another person. We may not know that they have a “soft spot” for baseball and will choose to support a baseball related suggestion even if it doesn’t make any sense objectively. Similarly, we may not understand their values and beliefs well enough to know how they’ll respond when multiple values or belief systems are in conflict. (See Who am I? for more on multiple values.)

The key is to assess your assumptions. The trick with assessing assumptions is that you don’t know that you have them. They’re transparent like panes of glass that we bump into from time to time. Instead of looking for these assumptions we need to develop a habit of assessing our assumptions indirectly. It might mean spraying water ahead of us and seeing if it gathers on something unseen to us.

If you’re concerned about running into something in the dark, you’ll reach out and tentatively test the environment with your arm before proceeding. This delicate dance is what we must do in our relationship with other people. We must gingerly reach out to see if our assumptions and reality align. We do this by reflecting back what we believe the other person is saying – and its meaning to us. Sometimes we’ll be right – or more accurately close enough – and other times we’ll be rather far off the mark.

One of the challenges with our language – not just English but all languages – is that it’s imprecise. That is words don’t mean exactly the same thing to every person. Words are not “meaning” no matter how much we might wish them to be. This is at the root of the problem with search engines. They have no idea what meaning you’re searching for when you search with a word that has multiple meanings.

As we interact, we infer the meaning of the word being used from the context clues. Sometimes those meanings are correctly assessed – and sometimes they’re not. Sometimes the best we can do is just guess and hope that we’re right.

There are times in any dialogue when there is a need for precision. We need to get to exactly the same understanding between all of the parties. This is like the handoff procedure for an aircraft or a three-phase commit cycle used to commit changes to a database. While in general a single source of understanding is a good thing, the effort necessary to get there may not be worth the return.

Sometimes it’s important that we accept the fact that we won’t necessarily know exactly what someone else is thinking. Instead, we have to accept that we understand their general perspective and direction, and elect to go back and learn more about an aspect of their perspective later. Neurologically we do this – when we leverage this in our interactions with others, we balance understanding and effort.

Our brains are not up to the job. While evolution has served us reasonably well, it moves far too slowly to allow us to match the explosion of information, data, and people on the planet today. As a result, tricks were developed to allow us to function in a world that is more complex than our minds can reasonably process. Positively they’re known as heuristics. They’re ways of simplifying problems enough so that we have the capacity to follow them. They’re rules of thumb and guidelines which we use rather blindly to allow us to function. We see one thing and we assume a bunch of unseen things.

Heuristics are the underlying mechanisms which drive stereotypes. Stereotypes are a heuristic applied to a group of people – usually not our own. While heuristics can be valuable in allowing us to function, stereotypes reveal the hidden problem. When we fail to be willing to dig into heuristics in a deeper way, we’re subject to the errors that we make because of them.

Mirror of the Mind

Most of the time the thoughts in our head flow by at a blinding pace. It’s like trying to single out people streaming out of a rock concert. There are so many people going by you at any one time it’s difficult to identify individuals, and harder still to find the one friend that you got separated from. In this melee of thoughts, it’s no wonder that we can’t identify what we’re really thinking or the root from which our thoughts come from. It’s only by apprehending our thoughts and suspending them in time that we can seek our true motives and find what hidden sources are driving them.

It’s a great gift to be able to do what Freud didn’t think was possible – that is objective introspection. Perhaps perfect objective introspection isn’t possible; but we can, if we learn to hold on to a thought and examine where it came from and what influenced it, set up a mirror in our mind to reveal those hidden motivations that we didn’t even know were there ourselves.

By apprehending and suspending our thoughts we can test what factors might have led to that thought and work backwards to the positive and negative memories that led to it. It’s more than chasing rainbows.

If you ask a child what a rainbow is you’re likely to get an answer that involves multiple colors arcing in the sky. If you ask an adult, you might get a more technical answer about light refracting at different rates through raindrops and causing the arc of multiple colors the children were speaking about. However, what happens if you ask a physicist? The answer is nothing. The physicist doesn’t believe in rainbows. Rainbows don’t, in fact, exist. You can look for the leprechaun at the end of the rainbow and you’ll never find him – not just because he doesn’t exist but also because rainbows don’t exist.

In the strictest literal sense, rainbows don’t exist. They have no mass. They emit no light. They really aren’t anything themselves. They’re an optical effect (or illusion, if you prefer). So when you’re chasing rainbows you’re chasing nothing.

As we’re looking into the mirror of our mind, as we’re apprehending thoughts, we have to realize the dichotomy that thoughts exist in one sense and don’t in another. Thoughts can say that they did nothing to shape us or our opinions, but equally they did – each thought layers on top of the other until we’ve developed a patchwork quilt of our lives.

I’ve spoken repeatedly of the idea of an integrated self-image and the need to see things as wholes rather than as pieces. (See my review Rising Strong Part 2 for a starting point on having or developing an integrated self-image). While breaking things down into their component parts allows us to see individual things clearly and to understand how they work, it hits a limit as there are emergent properties of wholeness that aren’t present in the individual parts.

Often times we attempt to break down and isolate things to a degree that prevents us from seeing the whole. If you were to dissect a cow and evaluate the individual kinds of meat that are available from the cow, you might have a smorgasbord of options for dinner, but none of those options will reveal to you what the cow is or how a cow works. The pieces are not the whole. In conversations, we have the capacity to evaluate the individual words, the perspectives, and the positions of the parties, but it takes work to step back and see the whole symphony unfolding before us.

Jim Collins in Good to Great speaks of the Stockdale paradox of being unwavering in your beliefs and simultaneously adjusting to input. This is the heart of dialogue. It’s holding on tightly enough to your beliefs so that they’re not lost, and at the same time loosely enough that you’re willing to test them. It’s the blind man who holds onto his walking stick loose enough to feel the objects it touches but not so loose that he drops it.

Learning the balance of detachment – not considering the stick to be a part of you by holding on too tightly and simultaneously not holding on so loosely as to drop it – is learning how to be in dialogue best.

While I’d recommend reading On Dialogue to provide context and wisdom around the process of creating dialogue, in the end Dialogue: The Art of Thinking Together is a better roadmap to getting towards dialogue and understanding how it can become misrouted. On Dialogue is more helpful when you’re confronted with a situation that isn’t neatly explained and you need a deeper understanding of the philosophy which supports dialogue.