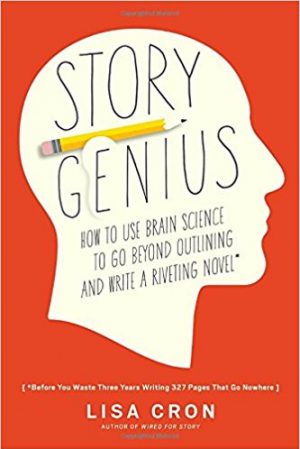 If you had a burning passion to write a novel, how would you do it? Starting from scratch and never having done it before, what steps would you take? The answer may lie inside of Story Genius: How to Use Brain Science to Go Beyond Outlining and Write a Riveting Novel. This is the second of Lisa Cron’s books that I’ve read. The first was Wired for Story, which connected research from neurology and psychology to create a vision for the things that make a story powerful. However, in that book, there wasn’t much in the way of the specific activities to take. Story Genius is different; it’s a roadmap designed to help you write your novel.

As was the case with Wired for Story, I’m not reading because I want to write the next book, whose story propels me to celebrity status. I’m reading to learn how to make the mini-stories that I use in training, speaking, and life more interesting and impactful. For that, I need not just understanding of the goals, but also how to get there.

There’s a sort of irony in a book that provides a framework for how to write a novel to criticize another popular framework; however, that’s what Cron does with Joseph Campbell’s Hero’s Journey from A Hero with a Thousand Faces. She criticizes it as creating predictable stories. Campbell’s work researched the hero stories and found patterns across cultures. The hero’s journey is a set of steps that all hero stories seem to follow. In that sense, I suppose that it is predictable. I can also accept that the framework in the wrong hands could be crude – just like a hammer and nail in the hands of a child doesn’t make a great birdhouse.

However, I can say that I find the model incredibly helpful. It allows me to order and sequence the information that I share. It is also good for me, because the worksheet I created for using the framework has spots for both the internal state and the external situations that impact the story. I find this reminds me to focus on the internal struggle of the protagonist more than just what happened.

I believe, whether you’re using Cron’s Story Genius approach or a Hero’s Journey approach, there is much to be said about the skill with which you’re able to execute the model. I see this as the normal progression from following to fluent and, finally, detaching. Following are those who are novices and need the structure. This is where the apprentice starts. Once you’ve followed something for a while, you can become fluent at it. This is the stage of the journeyman. As you become fluent in the approach, you recognize the limitations of the model, and either use a different model in those situations – or you improvise. In the detaching stage, you’re not married to the model, you’re married to the results. You’ve become the master.

With any model, until you’re skillful with it, it’s going to feel rough. However, it is rough before it gets better. (For more see The Art of Learning.)

People learn through means of the concrete – and they can (but won’t necessarily) apply this to the abstract. Cron argues that evolution devised us to love stories, because we could leverage the experience of other humans. This means that we would personally not need to take as much risk and would be able to extract roughly the same knowledge.

I’ve been educating people for decades now. I’ve learned that adult learners need to be taught differently (see The Adult Learner for more about how adults learn), and that knowledge isn’t always explicit knowledge. Sometimes there’s a tacit knowledge that is stubbornly hard to teach. (See Lost Knowledge, The New Edge in Knowledge, and Sharing Hidden Know-How for more on knowledge management and tacit knowledge.) I’ve seen the research that indicates that, if you have someone write out why they chose a poster, they’ll like it less in the future. (See The Paradox of Choice for more on this research.)

The power of stories may be in the fact that, when we’re engaged in a story, our brain reacts as if we are the central character rather than a passenger in the car. We’re not developing explicit knowledge about how to navigate a love triangle or ward off an alien attack. We’re developing tacit knowledge about how it feels to be in that situation. That learning, which happens at a tacit level, can dramatically impact your learning and retention.

How many times have you worked your way backwards to an idea that was just beyond your reach through where you were, who you were with, and other emotionally-connected clues? Stories also provide us with a shared context and lexicon for communicating. If two people have heard the same story, it’s possible to use an analogy or metaphor to convey complex ideas very quickly. If you speak of MacGyver (an old TV television show) you may find people talking about ingenious solutions to improbable problems.

It’s in the Cards

Cron’s model includes a series of steps that are designed to tease out the real story behind the story. As I mentioned in the post on Wired for Story, the real heart of the story is the internal struggle – and transformation – of the protagonist. However, that’s not the plot, and it’s not natively the set of scenes that, when woven together, will form the story. Questions like what if, who, why, what next, and when start the process of discovery about your protagonist, their background, and the fundamental problem that they have to struggle with and ultimately overcome.

Beyond the “twenty questions,” there’s a guide for putting together the individual scenes that will become the markers in the story. They’re the stars that form the constellations in the sky. Without anchoring scenes, the whole story will unravel. In the scene cards, Cron walks the author through the cause and effect of both internal and external factors with the structure of a scene card. Each card is a separate scene that may have a specific spot in the plot from the start or may simply be one of the bases that need to be checked off so that the score of the game makes sense.

Seeing Again for the First Time

Stories bring the protagonist full circle to see what they saw at the beginning of their journey with new eyes – with new understanding. They’re changed. Heraclitus is credited with saying that “A man never steps in the same river twice.” He’s not the same man, and it’s not the same river. This is fundamental to the process of the story. How does the protagonist’s view change because of coming to grips with his core struggle?

What Story Genius taught me was that my short stories must define the internal struggle more than the outer one – since that’s the one that people can connect with more readily – and that I need to help the audience understand how the perspective changed, not the circumstances. Stories about circumstance changes aren’t things that people can identify with – they don’t have control of external circumstances. However, what everyone has the ability to at least influence is their perspective. If you want to become a story genius, you’ll look for how you can change your perspective and the perspective of others through putting yourself and your story through a reading of Story Genius.