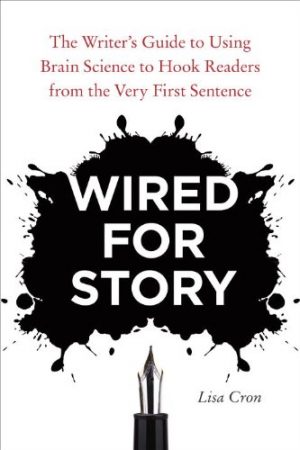 Socrates thought that books would do terrible things to our memories. Since the beginning of time, our knowledge had been passed on in the oral tradition of stories. These stories were memorized and repeated. They were handed down from generation to generation, and that’s how story co-evolved with our species. Wired for Story takes us through a journey of the mind, speaking not only of what causes us to be so intrigued and enthralled by stories but what it takes to create a good one.

There is now interesting neuroscience that supports that the brain is wired for stories. Parts of the brain are selectively disengaged. We get little shots of dopamine to keep us coming back for more, and the more research we look at, the clearer the picture becomes that our brains are designed by evolution to be story-centric.

The importance of stories has been a mystery. They’re powerful in the neurochemicals they release. They have the power to suck us in and cause us to stay engaged, even when we need to sleep or take a bathroom break. This sounds a great deal, like flow. It has the capacity to so engage us that we forget our biological needs. (See Flow, Finding Flow, and The Rise of Superman for the power of flow.) Much like play, there must be an evolutionary advantage to stories. (For more on the benefit of play, see Play.)

If something with such a powerful pull needs an evolutionary reason to hold it in place, what then is the power of story? The power seems to come from our ability to safely experience what’s impractical to experience personally. A spy novel allows us to experience the thrill of being James Bond without the real-world consequences of making a mistake and being killed or placed in prison. Less action-oriented stories still have their pull, as they teach us something that we didn’t know before.

One of the tricks that evolution taught us was the use of simulation. It allows us to learn from things that haven’t happened to us, whether they’re things that haven’t happened yet and may lead to stress (see Why Zebras Don’t Get Ulcers). Johnathan Haidt in The Righteous Mind speaks of the change that happened that allowed us to have shared intentionality. Somewhere along the line, we leveraged our ability to simulate to create an opportunity to work together towards a goal – the original team-building exercises.

Stories leverage this simulation and shared intentionality to create an opportunity to learn and live vicariously. We don’t have to be the Indiana Jones figure swinging from a whip and narrowly avoiding huge rolling boulders of stone in an ancient pyramid. We can allow the story to unfold and learn something. In some cases, the learning isn’t useful or realistic, but in less-glamorized stories, the lessons can be powerful. Aesop’s Fables are a good example of stories with a purpose. They teach important moral lessons.

The real goal of a story is to answer one overriding question. It answers one truly profound question about how the protagonist overcomes adversity by changing themselves. It’s a common misconception that story is about the plot – it’s about what happened. However, the real heart and soul of the story isn’t what happened, but is instead how the protagonist changed. If your protagonist doesn’t change as a result of the story, well, then it’s not really a story – at least not a compelling one. You can have a story like Dude, Where’s My Car? that is filled with silly situations, one-line zingers, and the occasional plot twist. However, without a real change in the protagonist(s), there’s no point. It’s mind candy, just something silly to fill the time.

Done well, a story reveals human nature to us through the changes we see in the protagonist.

It’s well-established that we’re lousy at predicting our own happiness. (See Stumbling on Happiness, The Happiness Hypothesis, and Hardwiring Happiness for more.) However, we even fail to predict our own behavior. Kurt Lewin’s equation that behavior is a function of both person and environment means that we’ll never really know what we’ll do until we’re actually placed in the situation. We want to believe that we wouldn’t mistreat mock prisoners (see The Lucifer Effect) or that we wouldn’t administer seemingly lethal shocks (see Milgram’s work in Influencer).

Stories give us an opportunity to view what happens when a protagonist who may seem similar to us reacts to a set of circumstances – things that most of us never want to see happen to us.

The difference, they say, between tragedy and comedy is timing. However, Inside Jokes revealed that there’s slightly more to it than that. Comedy is about creating misperceptions. It’s a 1-2 pause, 3 waltz that makes comedy work. We intentionally lead the audience down the wrong path, and then, with a flick of the tongue, we shift them in a totally different direction. The detection of the fault in the prediction is rewarded with a small shot of dopamine – at least in the cases of real laughter.

Comedy is, as I learned, all about the control of the release of information. (See I am a Comedian for more.) The comedian quite obviously knows the punchline but cannot do anything to reveal it before its time. Obviously, comedy is more nuanced and special, with tags and call backs and other tricks to cause the mind to reach the wrong conclusions; however, done well, all comedy is like all magic – it’s about the art of misdirection.

At some level, the difference between tragedy and comedy is timing, as the secret to comedy in and of itself is timing. So, too, is the case with story: the careful, timely release of information that exposes the inner struggle of the protagonist results in a story that keeps the reader leading in, leaning forward, looking for the next clue that will help them solve the puzzle. Occasionally, folks like me will take alternate approaches to solving a puzzle, as in How This Developer Solves a Puzzle, which is akin to reading the end of the story without progressing through each of the pages.

At some level, it’s the writer’s job to set the protagonist up to run through the gauntlet of the plot and to emerge the other side. The setup can be subtle in terms of its origins. Perhaps it’s where or when they’re born. Perhaps it’s the people they’re attracted to. At some level, however, it must feel like fate. It must feel like this is what they are meant to do – otherwise, why wouldn’t they turn away from the challenge and do something else?

Done properly, the setup in the story feels like fate. It feels like it’s what the person was born to do. Most of us go through life without that sense of purpose and meaning. We don’t know what fate would have for us. We seem to be just moving through life like a leaf blown in the wind. (See Extreme Productivity for more about how our paths are rarely straight.)

With the setup and the protagonist in their spots, all that is necessary is for the plot – and the transformation of the protagonist – to unfold. Perhaps the most difficult component to story writing is to find a pace of the plot where each twist is precisely where the audience needs it to be to keep engaged. Each revealing story comes before they lose interest. Where lives are sheer boredom punctuated with stark terror, stories should contain only the elements necessary to solving the final puzzle of the protagonist’s change.

I believe that distilling the story down to its necessary elements and controlling the pacing of those elements is the heart of how we can capture the power of story. After all, humans are Wired for Story.