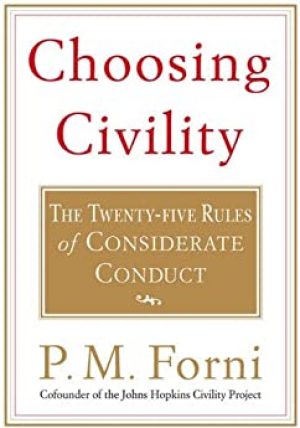 In a world where the slightest provocation seems to send us spinning out of control, it’s critical to find a force that can stop the escalation and turn the tide on the waves of fear and anger. That force may well be civility. In Choosing Civility: The Twenty-five Rules of Considerate Conduct, P.M. Forni lays out a set of guidelines to increase civility in our organizations and in our lives.

Our Actions Impact Others

In The Evolution of Cooperation, Robert Axelrod explains how his computer simulation games led to the conclusion that cooperation is supported by evolution. That is, we want to find solutions that are the best for everyone rather than just for ourselves. In Drive was my first exposure to the ultimatum game, where people would give up their own (small) monetary gains to teach others fairness. The Righteous Mind has a great coverage of how we evolved to morality and the forces that help to keep the anti-societal forces in check. We seem to know inherently that we have the ability to impact others through our words and actions, and we must sometimes use these actions to hold society together. (For another perspective, see Trust: Human Nature and the Reconstitution of Social Order.)

The real question is the degree to which we must and should consider others in our actions. There are the legislated requirements for consideration of others that are codified in laws. There are social norms and expectations that further define those times when we’re expected to consider others. However, beyond the social and societal norms, we have a great deal of flexibility in the degree to which we consider others. On one end of that spectrum, we’re seen as particularly considerate, and on the other end, we’re seen as inconsiderate.

Morality encompasses both the legislated expectations of behavior as well as the social norms. Albert Bandura speaks at length about how our morals can be disengaged in Moral Disengagement, and Phillip Zimbardo walks us through examples where this has happened in The Lucifer Effect. This end of the spectrum is the opposite of civility. It’s a place where you’re aware that you’re harming others, and you don’t care – or worse yet, you derive joy from it.

Tucked away in pages near the end of Diffusion of Innovations is a cautionary story. It’s a journal article that recounts what happened to Australian Aborigines after missionaries started offering them steel axe heads. The desired impact was one of improvement to the standard of living for the individual and the tribe. The actual impact was quite different, as it served to break down the fabric of society. Their society relied upon the relationship to elders and the stone axe heads they lent to younger men.

Steel axe heads meant that there was no longer a need for the younger members of the tribe – or the women – to respect the elders. The result led to a breakdown of society, including prostitution. (I still can’t wrap my head around how this came to be.)

The point is that our desired outcome in our relationships with others isn’t always the actual outcome we get. Instead, we can only be responsible for our intent, our preparation, and our willingness to adapt. We can’t control the outcomes. We only control our responses. More than anything, that makes the process of civility hard.

Compliments and the Backhand

One of the interesting things that seems like a compliment – “You speak very good English” – can be seen as a putdown or insult when delivered to someone who was born in the United States but whose ethnicity is clearly not Western European. It’s not that the person to whom the comment was directed is being sensitive if they respond. Nor is it fair to say that the person who made the well-intended comment was being insensitive. However, the fact remains that the intended complement is received as a backhanded putdown.

In environments of trust, it’s possible for the recipient of the comment to explain the problem to the person who made the comment, so that they become more aware and more sensitive. In this way, the implementation of an open communication improves the relationship between the parties and opens up the comment maker to deeper levels of civility.

Taking a chance on others may be something that Americans do in greater numbers and to greater degrees than their colleagues from the rest of the world, but that doesn’t mean that everyone can’t learn to do it. The degree of openness and trust are indicators for both economic and societal growth. If you can increase civility, you increase trust, and with increased trust, you achieve increased performance.

If you want to demonstrate civil behaviors, you must have a fundamental respect for other human beings. The more you can learn to respect every human, the greater your civility – and by Choosing Civility, you’ll improve your own life as well.