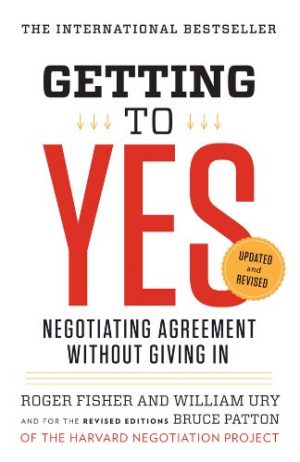 I don’t like win-lose games. I don’t think they’re the right way to approach life, so it would make sense that I’d resist reading Getting to Yes: Negotiating Agreement Without Giving In. It feels like it’s about dominating and conquering the other person in a negotiation. However, that’s not the approach advocated throughout the book. In fact, there’s guidance given to stand your ground when you’re facing people in a negotiation who do want to take this sort of a stance.

Positional negotiating is that it doesn’t consider the full scope of the negotiation. There are relationships and reputations to consider, not to mention the fact that the negotiation may not even be for the thing you really want. There’s a better way, and it’s principled negotiation. It considers:

However, I think there’s an important point missed here. There’s another relationship in play. That’s the relationship with yourself. It’s the answer to the question, “Is this the person you want to be?” If you negotiate like this, will you be able to sleep with yourself?

Everyone needs to understand that just because you can negotiate hard doesn’t mean you should in every case. Sometimes, the right answer is to not push so hard.

The Thinking is the Problem

It’s easy enough to focus on your perspective and how you see the negotiation, but that’s not likely to get you anywhere. You’ll defend your position, and they’ll defend theirs, but without anyone listening and trying to get to understanding, little progress will be made. We resist listening and trying to truly understand the problem, because we don’t think it will be useful in convincing them that we’re right.

Value differences are harder but not impossible to overcome. Knowing the value systems in play can make this process easier. (See The Righteous Mind for Jonathan Haidt’s foundations of morality for one value framework and Steven Reiss’ 16 Basic Motivators in Who Am I? for a second framework.)

While it was not expressed this way, finding common ground is a good way to get negotiations moving in the right direction. We can place ourselves on the opposite side of the table from someone over a particular issue, but we’re not on the opposite side of the table on every issue. The more we can move the conversation from being adversarial to exploratory, the better off we’ll be. Our brains are more creative and expansive when we don’t feel like we’re locked in a struggle.

There’s an old song by Sting called “Russians.” Broadly, it is about the escalating Cold War and the threat of nuclear annihilation. One of the lines is, “If the Russians love their children, too.” Despite all the things Russia and the United States didn’t agree on, the one thing that everyone agrees on (in general) as a part of our humanity is a love of our children. The point is that, if we look hard enough, no matter what the disagreement, we can find common ground.

It may be that the common ground is easier to find. For instance, Terri and I are passionate about resolving burnout. There are many people who are interested in this problem. We don’t agree with all of their perspectives. Despite that, we have a foundation of mutual respect that, while they may see things differently, we all have the same goal of eliminating it.

Sometimes, when we communicate with one another, the order we communicate in can make a big difference. When Terri and I are building training materials, we’re cognizant of cognitive load. (If you want to fully understand this, check out my review of Efficiency in Learning. If you want this in a nutshell, our communication series has a post/video that you can share, titled A KISS of Cognitive Load.) In negotiations, there’s another emotional aspect to consider.

If you deliver your proposal first, the other person will instantly start reviewing it in their mind – and potentially getting emotionally triggered by it. The result is they’ll be unable to hear what follows. As a result, an effective strategy is to review what you’ve heard first, then expose your thinking, and finally explain a proposal. (You may find that Motivational Interviewing is effective at helping you learn listening and responding skills.)

The best resolution to a negotiation is often an option that neither party had even considered at the beginning. Whether it’s a demilitarized zone around a border or something as simple as letting one child cut the sandwich and the other pick which half they want, creative solutions are amazing ways to end a negotiation where both parties don’t feel like they gave up anything but instead like they’ve managed to win.

Being creative comes naturally to all of us (see Creative Confidence), but it doesn’t come when we’re stressed out. (See Drive.) So, a prerequisite to getting to creative options is minimizing the degree of stress and fear. (See Why Zebras Don’t Get Ulcers for more on stress, and The Fearless Organization for more on reducing fear in the workplace.) Reassuring ourselves and the other party that we’re both looking to find creative solutions that give both parties what they really want is one way to reduce stress – if the other party believes you. (See Trust => Vulnerability => Intimacy, Revisited for more on trust and its role in relationships.)

When to Walk Away

Sometimes, you can enter a negotiation, and you just don’t know when to walk away. You’re so wrapped up in the process that you forget what you’re doing. Auctions are built on this premise. You get so invested in the process of buying the item that you’ll often spend more on the item than you had initially intended – unless you set (and keep) a firm maximum price in your head.

The negotiation equivalent is Best Alternative to a Negotiated Agreement (BANTA). This is what happens if you don’t agree. While it’s possible to overplay this hand since we tend to aggregate the benefits of all the alternatives – but not the downsides – we may believe the alternative is better than it really is. However, if we can’t enter a negotiation knowing what the alternatives are, we may not be properly motivated to negotiate – or walk away.

When You Can’t Agree

Let’s say you did everything right, and there’s still no way to reach an agreement. There are still some strategies you can use to move things forward. You can agree to a provisional agreement. You can agree in principle. You can move the conversation forward without reaching the end point.

While the goal is still Getting to Yes, that may not always be possible. At least you’ll have a better shot at it with the tools in the book.