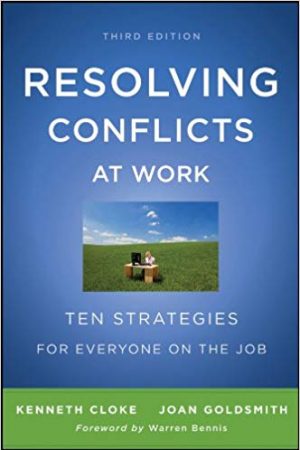 Conflicts are everywhere. They’re at home, at work, in our politics, and in our communities. Resolving Conflicts at Work: Ten Strategies for Everyone on the Job focuses on only work conflicts but delivers real thinking and tools that can be used in all the conflicts we face.

As I sat down to write this review, I kept identifying specific kernels of how conflict operates and how people can manage it better. Each time I’d cross a topic, it would be worthy of standing on its own. It spawned a series of articles:

There are more individual pieces I started that I won’t finish until after this review. By no means did Resolving Conflicts at Work contain all the information for the articles. I’ve been teaching conflict resolution for years now. However, what it did was trigger me to put the pieces together as individual and distinct topics. It increased my awareness that, though I thought some of these things were automatic and normal, they’re far from it.

It seems appropriate to convey the ten strategies that they advocate for resolving conflicts:

It’s not that these are wrong – in fact, these are the kinds of things you want to do in a conflict. The struggle for me in writing this review is that I conceptualize them very differently.

For instance, I believe that emotions are the key barrier to effective conflict resolution. In my review of De-Escalate, I explained many ways that emotions can impact us, particularly in a conflict. When we teach conflict, we start with managing emotions, and we return to it repeatedly. It’s not that Resolving Conflicts at Work doesn’t discuss emotions, but they’re far from first.

There’s nothing in Resolving Conflicts at Work that I disagree with directly. There’s great information that gives color and character to what I already knew and taught; it just feels slightly off.

The best relationships I’ve got were forged in the fire of conflict. The people I respect and trust the most are the ones with whom I’ve had disagreements and I’ve learned from. I’m built up by these conflicts, and I expect them, so that I can become a better person. The truth is that John Quincy Adams’ mother, Abigail, was right: “It is not in the still calm of life or the repose of a pacific station that great characters are formed.” We need conflict to forge our relationships and our character.

We often forget that conflict isn’t inherently bad. Conflict is only bad when it isn’t handled well, when it leads to hurt feelings or broken relationships. Conflict is the force that drives us forward into better understanding of ourselves and others.

Curiosity Killed the Cat, but Not by Conflict

If I won the genetic lottery in any way, it’s in my insatiable curiosity. My mother may not have appreciated the incessant “why” questions, but they are a powerful asset as I enter into relationships and, particularly, conflicts. The desire to learn about the inner world of the other person has helped me incalculably. (See Choice Theory for more on our inner worlds.) While curiosity may have killed the cat, curiosity is a powerful tool in conflict.

The degree to which we are certain can be both a hinderance and a help. The more certain we are of our internal values and beliefs, the more open we can be in discussing them with others – after all, there is no or little risk. However, our certainty that we’re objectively right for everyone and that there are no alternatives that are just as good or better than our approach leaves us unable to listen and understand others’ points of view.

It’s the person who is uncertain of their position and vulnerable who is the most likely to vehemently defend it. When you feel comfortable with who you are and what you believe, you have no sense of fear or vulnerability and therefore no reason to exert energy to defend yourself.

One of the challenges we face in our modern world is that conflict is most frequently adorned with war-like imagery. It’s seen as an epic battle, where there is a clear winner and loser. Instead of looking at conflict as a natural process that helps to shape and define us, we focus on winners and losers.

The challenge with this approach is that it encourages us to dehumanize the other party in the conflict. (See Moral Disengagement for more on dehumanization.) By dehumanizing them, we lose all the fundamental respect that we offer every human. Instead of being a part of the brother- and sisterhood of humanity, they’re somehow disconnected from it. This, in turn, causes us to lose the value we can gain from conflict in terms of better understanding and sharper vision of the world around us.

Detachment (see The HeartMath Solution and The Happiness Hypothesis) and acceptance (see How to Be an Adult in Relationships) are two key components for our ability to be at peace and therefore exit conflicts successfully with good solutions and a greater respect for the other party. When you stop trying to change the unchangeable you have a lot more energy – and a lot less fear.

Accepting things as they are is the first step into a world of accepting our emotions as they are – rather than being afraid of what they may bring.

It’s not that you ever get rid of emotions. Emotions are healthy and natural things. (See How Emotions are Made for more context on emotions.) Instead, with practice, you can get to the point where there’s a better working relationship between reason and emotions. To use the Rider-Elephant-Path analogy from The Happiness Hypothesis, the rider (reason) and elephant (emotions) develop a rapport where they respect each other and work together towards common goals.

If we can reach this stage, then we can stop seeking emotional soothing from other people. We can stop looking for them to soothe our pains – pains that we may or may not need to hold onto. A simple change in attitude from being wrapped up in our emotions to allowing them to flow through us may help us with Resolving Conflicts at Work.