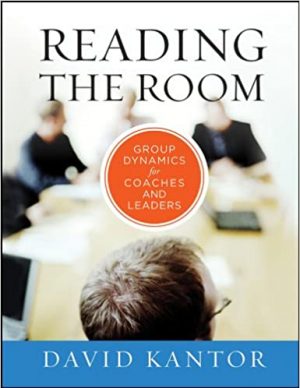 Have you ever had that bewildering moment when you’re in a conversation and you suddenly realize that you have no idea what the conversation is about? You’re going along, disagreeing but still conversing, until you reach the moment when you’re aware that you’re not talking about the same thing as the other person, and you wonder exactly how you got here. Reading the Room: Group Dynamics for Coaches and Leaders is designed to help you better understand the dynamics that are in play in a room and be able to observe and react to them better.

I was first introduced to David Kantor’s work via Bill Issacs’ work, Dialogue. The revelation that was shared was that people speak from three different points of view: power, meaning, and feeling (affect). When people are in the same conversation but speaking from these radically different perspectives, it’s often as if the people in the conversation are talking past each other, unable to even hear, much less process, what the other person is saying. As I was preparing the Confident Change Management course, I decided that I needed to dig a bit deeper into Kantor’s work. I’m glad I did.

The power, meaning, and feeling (affect) I mentioned above make up the communication domain. Some people are concerned with the movement of power, some with the meaning of it all, and some with how it will make people feel. What is important here, as it was with operating systems, is that people don’t realize this is happening.

They have a style of communication that is their preferred style. It is the one they’ll fall back to most often, particularly when stressed. Communicating with people speaking in a different domain can be as foreign as speaking with someone in a foreign language. It takes great concentration and focus to understand what the other person is saying.

The third part of the model (or third layer, if you’d prefer) is the way that someone is responding in a conversation. Here, most of us have more flexibility, but still tend towards one of the following approaches:

Kantor says that people can only take one of these four stances in a conversation. I disagree, because I think it underplays the need for curiosity, inquiry, and understanding. Whether you want to use Motivational Interviewing, The Ethnographic Interview, or some other guide to understanding the position of another person, I believe that it’s essential to communication. So, I support the attempt to identify archetypical moves, I’m not sure this is the comprehensive list.

Dialogue Mapping exposes the IBIS model of dialogue mapping that includes questions, ideas, pros, and cons. Fundamental to this approach is the question, which is both the central theme for discussion and a way that the problem can be clarified.

A key, and appropriate, observation of Kantor’s is that sometimes the conversations aren’t about the conversation happening in the room at that time but are instead ghosts left over from our childhood, the stories we told ourselves, and the patterns we were left with. We see reasons to trust where none should be given. (See Trust => Vulnerability => Intimacy, Revised for more on trust.)

Sometimes the challenge with the conversation that’s going on has nothing to do with the here and now and instead is some remnant of some experience that was had a long time ago, and it’s left an indelible mark on our psyche, a permanent fixture that we’ll spend the rest of our lives covering up or addressing.

Shadows are places where the ghosts live. They’re the places that people don’t want to go. They’re spooky, scary, and frightening. However, the greatest risk to our conversations isn’t in not learning a new skill. The greatest risk is in not being able to address those things that hold us back.

Whether these barriers to success surface as ghosts or as undesirable consequences of our default operating modes, learning to shine light in the shadows of our psyche – and then having the discipline to do it – makes us more complete as humans, coworkers, and leaders. Unlike many popular psychology books today, Kantor invites us into the space of our weaknesses, so that we can discover them more fully and learn to address the most grievous issues that are causing us harm.

In Radical Candor, Kim Scott has a place called “ruinous empathy,” where there’s caring for the other person but no willingness or ability to challenge directly. Kantor calls this “courteous compliance,” when you disagree with the conversation but aren’t willing to speak up to have your voice heard. Kantor explains that we need to have the other voices to test and check our perspectives. It’s the silence of dissenting voices that can prove disastrous to the person and to the organization. (See The Difference for more on being inclusive of all voices.)

Often in organizations, you see compensating systems. These are systems with the purpose of limiting the negative effects of other individuals. Instead of confronting the person directly about the problem, you’re faced with a system designed to limit the limitation of a leader or group. The system might take the form of an additional review meeting, an extra sign off, or additional activities, but ultimately the goal is to prevent the negative consequences from happening again.

The problem with these systems is that they are necessarily both wasteful and incomplete. They’re wasteful, because if you could only correct the root problem – or even create a higher awareness – the system wouldn’t need to exist. They’re incomplete in the fact that they’ll never cover every possible situation.

Organizations exist through their ability to keep the chaos of the market and the world on the outside. They resist change, because it’s the status quo that keeps the organization together. People with random operating systems are a threat to the very nature of the organization. They’re called disruptors, and there’s a reason. They disrupt the carefully crafted control of the organization and replace it with just a little chaos.

Organizations resist the chaos that those with a random operating systems bring only to often find themselves unresponsive to the broader world until it’s too late.

Kantor continues with a conversation of model building. That is, building a way that the organization will function – a leadership model. Though he uses different terms, it’s the same following, fluent, detaching approach that I’ve discussed before that is the heart of the apprentice, journeyman, master trades model. (See Presentation Zen, The Heretic’s Guide to Management, and Story Genius for other places where it’s occurred and Apprentice, Journeyman, Master for a core conversation about the progression.)

He uses the words imitation, constraint, and autonomy for the progression, but the concepts are nearly identical to the following, fluent, and detaching that are more commonly used.

Perhaps it’s because I’ve been through the progression myself that I don’t get locked up with Kantor’s approach to everything. However, I feel as if I’ve gained some appreciation and skills for Reading the Room through reading the book.