I meet monthly with a group of organizational development folks. Some of them are professors. Some are consultants. Others are practitioners in their organizations. I love the meetings because they challenge me to learn and grow. Several of the participants are connected to the Greenleaf Center for Servant Leadership. It’s through this connection that I came to read Servant Leadership.

As one of the guys, Jeff, said, Greenleaf isn’t a cheap date. That is, the material in Servant Leadership isn’t an easy read. You’ve got to stay focused, work at it, mull it over, and generally put more work into it. However, it’s worth it.

What is a Servant?

When I’m thinking about what it is to be a servant, I instantly think of Heroic Leadership and the example of the Jesuits. I think of folks who put the rules and their ego behind them to serve others. The essence of humility, as was explained in Humilitas, is power held in service to others. So a servant is quite simply one who serves others. It’s because of that service to others that other characteristics, such as humility, surface.

Great leaders are servant leaders, whether you look towards Jesus’ contributions (which nearly every religion recognizes as a great man, even if denying that he was the Messiah) or you look at present day servants such as the Dalai Lama (see My Spiritual Journey for more on the Dalai Lama).

The heart of leadership is the ability to lead or guide others. While there’s some belief in natural skill in the ability to lead, most scholars agree it takes some level of study to become a great leader. While leadership is often confused with management, which is coordination of objectives and managing outcomes, it’s a separate discipline which requires the ability to motivate people, and also the ability to “see the big picture” and devise a meaningful place to go. Leaders observe the current reality and create a vision for a new world that their followers would like to be in, and then set out upon the journey with them.

The challenge of leadership is the drifting away from the mission of leading people and falling victim to an ever-increasing ego, where the leadership becomes more about the power of the leader and less about how the leader is serving the needs of the followers. This is akin to the maxim that power corrupts and absolute power corrupts absolutely. Leaders must have a constant vigilance to ensure that their leadership doesn’t become about them and remains about the people that they’re leading – and serving.

For this, Greenleaf has a model. The model is primus inter pares – “first among equals”. That is, the organization should have a set of leaders who are peers. They hold no position over one another, but are instead a collection of similarly motivated people who care about the organization and the people it touches, both internally and externally. This equality forms the basis of limiting ego. As they hold no position of power over one another, it’s difficult for their ego to grow out of control.

The balance to this, however, is the need for someone to be able to drive the group to a decision. While the utopian idea that everyone is a peer is useful for controlling egos, it’s awful at helping the organization get things done. As a result, you need the ability for there to be a leader whose role it is to ensure that things continue to move forward. At effective law and accounting firms this might be the managing partner. That is, a partner who, for a time, is responsible for driving the discussions forward. (Admittedly, I’ve seen very few of these effective firms or effective managing partners.)

Connecting with the Cosmos

Many of the books that I read are structural guides. They talk about ideas and frameworks. They tell you to tweak this or do that and stop doing this other thing in order to get the results you want. This is the structure that I expect from a book. However, there are times, like for Servant Leadership and in cases like Theory U and Leading from the Emerging Future, where the structure is accompanied by a bit of mysticism. I do not mean this in a pejorative sort of way, I mean that there’s a connectedness or wholeness – a sense that the author expects that you can’t fully understand what the house will look like by just the structure. Strangely, I found more mysticism in Servant Leadership than in religious books like My Spiritual Journey and Spiritual Evolution.

A few dozen miles from my house is a place called Camp Chesterfield. It’s the home for the Indiana Association of Spiritualists. While there has historically been some controversy around the idea of mediums practicing on the camp property, the place has an overall sense of peace to it. I don’t believe in healing crystals or many of the other beliefs that some of the residents of Camp Chesterfield hold. If you asked me to describe the grounds to you, I’m certain I wouldn’t be able to convey the same peace to you. Somehow, everything comes together in a way that works. 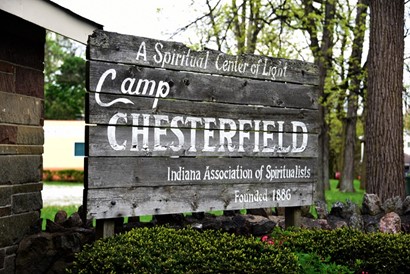 Greenleaf believed that religion at its root means “to rebind”, as in to rebind humans to the cosmos. That is, there is something about connecting ourselves to the world that can’t be explained. He describes the general ways of operating in various types of organizations. These are more like, as the Jesuits might say, a compass instead of a map. That is, they don’t tell you exactly how to get from one place to another, but instead give you a general direction.

Having had the honor of working with organizations that really understood how to work together – and those who do not – I can tell you that from the outside they look very similar. However, there’s a certain atmosphere in some organizations that make them different.

For Greenleaf the answer is no. However, to understand why, you have to realize that he believed organizations are designed for the betterment of everyone that they touch. That is, every person internal or external to the organization should be made better by it.

In other words, the age-old debate of whether the ends justify the means is put to bed with a clear answer of no. You can’t do “anything necessary” to achieve the purposes of the organization, because the organization’s real goal should be the betterment of everyone involved.

Brené Brown calls the kinds of people who are capable of interacting in healthy ways throughout their lives “wholehearted people” (see Rising Strong Part 1 and Part 2). Dr. Wayne Dyer calls these people “No Erroneous Zone” people (see Your Erroneous Zones). Whatever you call these people, you’ll find that they know who they are. They’re not looking outside themselves for validation. They’re not bending to the latest winds of change.

There’s no map here for how to become the kind of wholehearted leader that believes they’re a servant. There are not five easy steps to building your character as a person and as a leader. However, there are more clues to the organizational structure, and more importantly the aspirations for organizations, which lead to the kind of growth that allows someone to become a servant leader.

Becoming a servant leader may not be a straight or easy path – but it’s one that is worth it, so you may want to go read Servant Leadership.