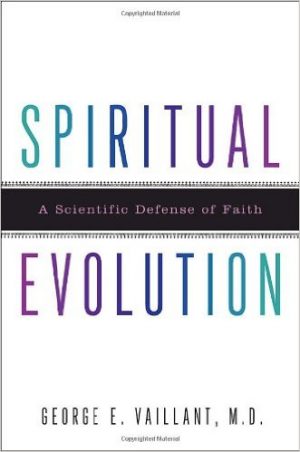 In Destructive Emotions, the Dalai Lama pondered with Daniel Goleman about whether we are generally selfish or generally compassionate creatures. He framed it from the perspective of a classic philosophy question and shared his own idea that we’re both compassionate and selfish and that we operate from a place of compassion until we experience a scarcity. It’s this passage of Destructive Emotions that resonated most with me as I was reading Spiritual Evolution: A Scientific Defense of Faith. Spiritual Evolution is a journey into the evolution of our compassion. It’s a journey into understanding why we as humans have developed a kind of compassion not found anywhere else.

The Mind and Body are One

There’s little argument that our mind controls our body. It’s moving my fingers as I type this. It moves our eyes across the screen (or page) to read whatever it is that is our desire to learn. It allows us to walk and to run. However, we tend to think about the mind and the body as two different things but perhaps they’re really just one thing.

After all, our heart doesn’t beat on its own but through the rhythmic signals from the autonomic system. We can take control of our breathing by focusing our attention on it but like our heart our breaths continue without our thoughts. Clearly the brain and the body are one system that interacts. As Master Nan was quoted as saying in Theory U and Leading from the Emerging Future “There’s only one issue in the world. It’s the reintegration of mind and matter.” What matter is closer to the mind than the body?

One could easily expect that this healing would be best accomplished through a church environment but the truth is a bit more complicated than that. The truth as it turns out is that the best way to heal the mind and the body is love.

Love as Shorthand for Spirituality

In the Christian bible 1 Corinthians 13:13 (NLT) says “Three things will last forever – faith, hope, and love – and the greatest of these is love.” Buddhism is based on love for others often called compassion. If you want to try to define the relatively difficult to describe spirituality it’s possible to describe it in a single word. That is, love.

In my experience it’s love that heals old wounds. It is love and compassion for others that builds our psychological immune system. (See Stumbling on Happiness) David Richo in How to Be an Adult in Relationships says “Love from another adult does more than just satisfy us in the present. It ripples back in time for us, repairing, restoring, and renovating an inadequate past.”

Finding the love we need to heal our hearts may seem like the work of churches, however, in a church there’s the trap of having to be seen as perfect. This is the must-be-seen-as box that is discussed in The Anatomy of Peace. In Changes that Heal Henry Cloud (of Boundaries and Beyond Boundaries) says “It is interesting to compare a legalistic church with a good AA group. In this kind of church, it is culturally unacceptable to have problems; that is called being sinful. In the AA group it is culturally unacceptable to be perfect; that is called denial.”

Alcohol may not be the behavioral issue causing you to be unwell but there are other support groups that provide a safe and loving environment where it’s OK to be vulnerable.

Surviving by Being Vulnerable

I mentioned in my post Trust => Vulnerability => Intimacy that in order to be vulnerable you have to feel safe and to feel safe you have to trust. At some level this trust is hard wired into humans – and all mammals. While puppies, kittens, and human babies advertise their helplessness and need, offspring of reptiles and fish do not. They sit in their silence hoping that their needs are met without announcing that they have it.

Humans have the longest period of raising their offspring of any animal on the planet. We’re born less mature than most animals because of our need to make it through the birthing canal. We have an absolute dependence on our parents and on the community they live in to support us for years and years – before we’re able to meet our own needs and support ourselves.

In Christ’s times there were the Pharisees. These religious leaders were all about rules – largely rules that didn’t apply to them. They heard the teachings about supporting one another and considered them less important than their doctrinal rules around when you could work. Christ fought this by acting. By meeting the “worst” of society in their homes and loving them unconditionally. But the same call to action can be found in the writings by and about Confucius, Socrates, and Isaiah.

Gandhi once said “I don’t think much of your Christianity but I like your Christ.” As a religion Gandhi was unimpressed but judging by the actions of Christ he was impressed. It’s our job – no matter what your religion – to live a life that can be noticed by others. To live a life that make others say “I want what he has.” In Heroic Leadership we saw how the early Jesuits lived lives that their non-Christian hosts found honorable and in their living honorably their hosts became more interested in their beliefs.

Survival of the Friendliest

Darwin’s works on evolution shook the world. He simply observed the world and realized that those animals whose offspring survived would create the next generation of the species. It is from this that we draw the phrase “Survival of the fittest” that is, those animals most adapted to their environment will survive to the next generation. However, who is to say what the fittest is?

In the case of baboons, the answer is the fittest mothers are those with the widest social network. That is the best adapted baboons aren’t those whose muscles are the strongest, those whose hearing or eye site is superior. Instead it’s the baboons whose ability to build and maintain social connections that have the best opportunity to keep their genes in the gene pool.

So from an evolutionary standpoint being social, caring for the other animals in your community is a good strategy.

Sometimes it’s called puppy love. Sometimes it’s called lusting – but where does it come from? Well as it turns out it may be the same chemical that helps mothers bond to their young – Oxytocin is the powerful chemical that causes mothers to start lactating, causes uterine contractions, and will cause prairie voles – who mate for life – to take on any capable suitor. Oxytocin is what causes mammals to overcome their aversion to close contact. Anyone who has seen teenagers – and elders – in love will admit that they must have a lot of oxytocin flowing through them to spend so much time so close. The good news about Oxytocin is that we learned in The Happiness Hypothesis that it has the ability to turn down the amygdala’s fear response and help people be happier.

Finishing out our chemical cocktail is dopamine – this is the reward chemical that we get when we do behaviors that continue our health and the health of the species. That is those things like eating and sex which help the species move forward are rewarded with dopamine – which makes us feel better.

One of the traps that we can sometimes get in is the feeling that if we love someone we must help them out. However, that’s not always the case. As I mentioned in my post Where the Consequences Live and in my review of How Children Succeed sometimes it’s necessary to allow consequences to happen. Sometimes it’s not necessary to change the circumstances – whether or not we’re talking about consequences. Sometimes it’s important to realize that simply the act of knowing that someone else cares enough to listen to your situation and your concerns is loving them.

Love is more about witnessing the other person’s situation and taking in their perspective than it is about rescuing them from the situation. Love is indeed action but sometimes that action is listening.

The Active Ingredient in Placebo is Hope

In The Heart and Soul of Change I found myself reading account after account of how difficult it is to eliminate the placebo effect from testing psychotherapies. In Spiritual Evolution the topic of placebo returns but this time the relationship to hope is clearer. It’s clearer that the “active ingredient” in placebos is hope. It seems that hope in and of itself is enough to make people better.

A Forgiving Peace of Mind

I’ve spoken about the power of forgiveness before. In my review of Emotional Awareness, I talked about my belief that resentment (the opposite of forgiveness) is a corrosive agent. This could be said differently as poison. My review of Love, Acceptance, and Forgiveness also obviously speaks of forgiveness. However, I’ve neglected two essentials to forgiveness.

Second, forgiveness is the ability to see the future. It’s the ability to visualize a future where we can move on and regain what we once had. It’s taking a more future temporal focus (See The Time Paradox). It’s the focus on the future that allows us to leverage our empathy for the other person to see how we can be better together again.

Rejoice in Your Children, Rest When You Can

Not to be morbid but have you ever visualized what it would be like to be on your death bed? Not to try to pick out the disease or condition that will take your life but to use it as a reflection point to consider what you’ll value most about what you’ve done and where you’ve been. It’s not atypical for a book about growth and personal character to consider this moment.

Sometimes we’re focused on the achievement of peace or personal nirvana. We think that more than the houses, boats, jets, and cars that we’ve acquired we’ll be most happy about the peace we discovered. While this is true there’s an even greater happiness that awaits us. That is the happiness that we know that we’ve imparted this peace and enlightenment to our children.

More broadly, the ability to share this peace with others and to create a ripple of peace and happiness will be something that will warm our hearts when we’re near our end of days.

All Religion Is True with Errors

This insight is particularly interesting to me when I consider the similarities and connectedness of religions across the world. Buddha is considered an incarnation of Hindu Gods. Christianity and Buddhism have some interesting similarities. Judaism and Christianity share the same God. Muslim’s Mohammad said that the bible was the word of God.

Having seen some of the missteps of Christianity through the lens of history I believe that there are errors in it – and I assume that the same is true of other religions as well. From this I take that religions are valuable but they’re all slightly errant. I’m sure that the errors are caused by humans – but they exist none-the-less.

I leave with one statement that made me literally laugh out loud – much to the confusion of my fellow airline passengers. The discussion was about AA and the relative advantages of it. One of the criticisms lobed at it was that it is addicting, like a cult. However, as George Vailant points out – so are puppies. Just because something is capable of healing love and you can’t get enough of it doesn’t make it an addiction. Check out Spiritual Evolution and find your own path to something that fills you with love.