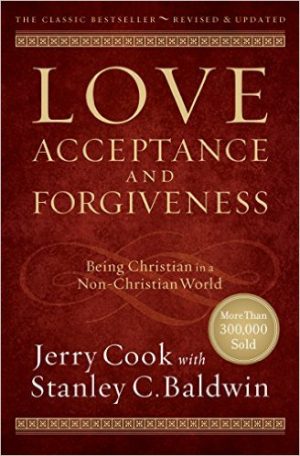 In my Sunday school class at church, we’re watching an old series by James MacDonald titled “Lord, Change My Attitude.” During one of his sessions he mentions a book that he refers to as being out of print – Love, Acceptance, and Forgiveness. At the time he made the comment it was true, but in the intervening years the book was revived and republished so when I went searching for it, I found it.

The book carries the subtitle “Being Christian in a Non-Christian World” but that’s not why I read it – nor do I believe it does justice to the key truths that are contained in the book. (In short, I’m encouraging my non-Christian friends to read on – and read the book.)

Above all, the book shares a striking clarity of what love is. It goes beyond the magnetic draw that pulls two teenagers together. You can call that lust, or chemical reactions, biology, evolution, or what you will. The book calls love a decision. Few of us think about love as a decision – as a choice we make. We believe that things like marriage are a choice – but love? Don’t I just love the people I love? There’s no rhyme or reason to it – or is there?

There’s some research to explain that some of our desire is triggered by scent – that makes sense because our olfactory senses are tied to our basal brains. However, there’s also research to show that the more time with people the more we tend to like them. There are, of course, notable exceptions of the people that we develop a dislike for. So there are rules to whom we like and dislike – but love is different.

Popular music, tv, and the rest of culture talk about the emotional kind of love – that’s triggered by biology – but we don’t hear about the decision that people make to love. The problem with the emotional love is that it will fade. You simply cannot sustain the same sort of feelings for your spouse as when you first met, we’re not wired that way. Biological love – for lack of a better term – triggers the release dopamine – one of the same chemicals that is released with the use of illegal drugs. And just like addictive illegal drugs, high levels of dopamine cannot be sustained indefinitely.

So you have to replace biological love with a choice. It is a conscious decision to put someone else in your life first. I don’t mean this in a platitude sort of way – agreeing to put them first but not agreeing to get up and take the trash out because they’re not feeling well. I should also caution that I don’t mean this in a way that means that someone can never stand their ground with their spouse, instead, I mean that you must do all things in love to your spouse but know when to protect your rights and needs. (I probably wandered a bit off the book’s central point here but it’s a realization that I find helpful.)

Acceptance is an interesting bit because it seems like we’re hard wired to not do it well. We don’t trust those who do things differently than us. We don’t like people who don’t dress like us, talk like us, or think like us. Eastern philosophies speak of detachment and being OK with any observation as long as that observation is true. We as humans are notoriously good at dismissing any information that doesn’t match our preconceived ideas. We’ll ignore opposing positions and dismiss people who share them because their views don’t match ours.

Acceptance – for me – is realizing that truth is relative to everyone’s experience. I cannot change others. I can only influence them. I can influence them best when I try to understand them better. So if I want to reach someone I need to understand them, which means accepting that at this moment they are who they are. I realize this is a long chain. In my experience, accepting people as they are – not how I want them to be – has reduced a great source of stress.

The last headline topic is forgiveness. This is hard because I’ve seen grudges carried in my family for decades. There are family members who simply don’t (and didn’t) talk to each other because of a misunderstanding decades ago. (No, this isn’t a hyperbole.) In those cases I’ve applied significant pressure to try to reunite the factions and have seen more than a bit of success. Through helping with the understanding of acceptance it became possible to forgive them.

The book describes forgiveness as an environment, a lifestyle. I believe that – even though I won’t say that I live it every day. I know that research has demonstrated that maintaining negative emotions has a negative impact on your health. I know that research shows that people who “harbor grudges” are less happy than those who don’t. However, I’ll share that the line between forgiveness and placing yourself in a place of vulnerability again is frighteningly narrow.

Everyone has the right and need to protect themselves from harmful, toxic people. Forgiveness doesn’t mean continuing in a bad situation just because you forgive the other person – however, it means letting go of deep-felt feelings of anger or hurt towards another person. You can simultaneously forgive someone and create barriers between you and them to protect yourself.