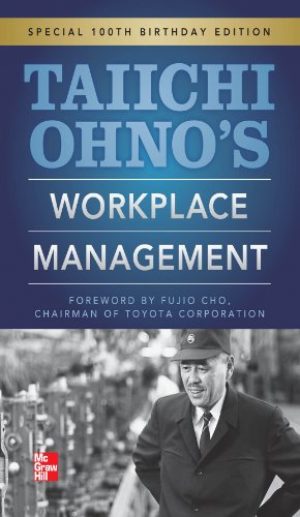 Lots of people speak about the Toyota Production System or lean manufacturing, but few have taken the time to look at what the originator has to say about it. Taiichi Ohno’s Workplace Management: Special 100th Birthday Edition is his writing about the development of the system, including the thinking that led to its development.

In the manufacturing world, what Toyota did was unprecedented. They changed the way that automobile manufacturing worked so that a small company could compete with the much larger – and initially more efficient – auto manufacturers in the United States.

Talk to the Gemba (and Write it Down)

The Gemba are the people that do the work. The Gemba is the workplace itself. When one says talk to the Gemba, they’re saying go to the place of the greatest knowledge about what is actually happening and learn from them. Don’t make guesses. Don’t believe that you know better. Simply ask them and stop to listen to what they say. Then write down what they say, so you don’t forget, and you won’t have to ask them again.

This is very different than the way things used to work. It used to be that management would decide they knew what needed to happen better than the people who were actually doing the work – and frequently they were wrong. Being wrong only created frustration and animosity between the workers and management.

Only What You Need

Manufacturing is used to the idea that you can produce more if you keep producing the same thing continuously for long periods of time. The typical response to this was to run very long runs of things. You’d run well more than what you really needed, because it seemed to be efficient. The problem is that this created inventory of unfinished goods that would need to be held and managed. It’s called inventory carrying cost – and it can be a real problem for some organizations.

The mentality of optimizing the current operation – the current thing that’s being manufactured – whether or not it can be sold in a reasonable amount of time is problematic for the overall profitability of the organization. However, to be able to be more agile and produce different things in the right quantities requires addressing a keystone problem.

In most manufacturing scenarios, changing over a line from producing one thing to another thing takes time – a lot of time. While machines can be optimized to keep running whatever they’re making, the process of changing from one product to another is seen as wasted time. After all, there’s no production during the changeover. With changeovers running into the hours (or, in extreme cases, days), it’s easy to see why there is a reluctance to change to the next thing.

To enable the production of the right amount of parts at the right time, you’ve got to get good at changeovers – like minutes good. This change in the fundamental dynamics of the manufacturing process enabled the move to producing only what was needed when it was needed. Suddenly, the inventory carrying cost for what you didn’t need was much larger than the cost of making the changeover at the right time.

If you further reduce your need to store and move things, you can gain further efficiencies in the manufacturing process. What if all the parts that you needed to assemble something showed up minutes before you needed them instead of months? You’d have fewer materials to warehouse, and you’d spend less time moving them around to keep out of the way of your current operation. The net effect is better efficiency, but it requires another keystone change.

Getting internal and external providers aligned so that they provide just the right amount of parts at the right time is an artful dance. It’s a dance that, when done well, reaps great rewards. Instead of planning monthly receipts of parts, you expect daily, and as a result you need roughly 1/30th the storage.

This paved the way to another innovation: vendor managed inventory. In this scenario, vendors are engaged to restock warehouses and stores of their customers. They bill the customers for the new products they provide, and the customer is freed from the concern of managing enough stock. It requires a level of communication and trust, but the result is fewer supply chain oscillations and better overall efficiency.

The key learning that is at the heart of lean manufacturing is removing activities and aspects that don’t add value to the consumer. Even the most diligent worker who is focused on the wrong thing adds no value to the end product. Ohno was clear that people routinely confuse working with producing valuable work.

He was confronted with the fact that United States workers were nine times more productive than their Japanese counterparts. The reasons for this were many, but none of them were because the Americans were working harder. It was about how the labor was being used and how focused the labor was on productive items.

I spent my high school years in Michigan, and I can remember touring the GM plant in Saginaw, MI as a part of some school field trip. One of the things that was the most confusing at the time was when our tour guide pointed over to a man sitting at a table reading a newspaper and said, “That’s the most productive guy in the plant.” It didn’t make sense to me that the guy doing no work was the most productive guy. Maybe he was on a break. The guide explained that he was reading a newspaper, because all the machines that he was supervising were running efficiently. If a machine stopped, he’d jump up and fix it.

It seems somewhat wasteful to have an employee reading a newspaper. However, when you look at it from the point of view that the machines are doing the work – they’re automated – and there is a human element added to fix problems, it starts to make more sense.

The innovation, which came from the fabric-making business, was to create machines that stopped when there was a problem so that someone could fix them rather than creating defective product. Defective product necessarily costs the organization money and therefore efficiency. Creating systems that have humans fixing problems is an ingenious way to improve efficiency – but not as much as separating human time from cycle time.

Nine women cannot have one baby in a month. It’s a fundamental problem of throughput and bandwidth: nine women can have nine babies in nine months, but one baby in one month isn’t possible, because gestation takes nine months. A similar misconception occurs around the amount of time that it takes for a part cycle to complete and how much of that time must be tended to by a human. Consider a process that takes 10 minutes. Of that, one minute is setup, and one minute is removing the part from the machine. In this scenario, only 2 minutes require human intervention, even though the cycle time of parts is 10 minutes.

To maximize efficiency, you’d put one person between five machines, cycling through them sequentially setting up and removing parts. You might only get 90% efficiency from each machine, because the machine is waiting for the human – but, conversely, the overall output of the human will increase almost five-fold. Over time, this matters, because humans and raw materials are invariably the most expensive parts of the manufacturing process. While machines are capital intensive and seem like large costs at the beginning, over time, their relative cost is minor.

Quality Built into the Process

As I mentioned earlier, defective products necessarily reduce profitability and therefore efficiency. Reducing defects is a goal of most manufacturing environments. However, there’s a secondary goal of discovering defects sooner. The closer that you discover a defect to its creation, the less cost that the defect has to the organization. If a hole is misaligned, it’s easy enough to scrap the part and melt it down or whatever. If the part goes through ten more operations before needing the be scrapped, its cost is much larger – perhaps ten times as large.

Rather than having a separate quality department that checks items after they’re done, everyone in the plant becomes focused on making sure the products are right. This shift, while simple to state, is difficult to get everyone to embody. However, it means fewer defects – due to the attention – and less costly defects, as they are discovered and resolved sooner.

One of the most common ways that I’ve personally observed lean manufacturing (and other variants of lean) being misused is to cut the muscle instead of the fat. Because of market or internal pressures, the organization too aggressively pursues the removal of cost from a process and the result is that instead of removing fat, you begin to remove the very muscle that makes the system work.

Too often, I’ve seen transformation experts blunder into a process without a thorough understanding of the overall picture. As a result, they remove key activities that reduce costs throughout the process, because, on paper, the costs look large in the beginning.

Ohno was clear that accounting games and the ways that you view the process can distort the results and can take a system that’s capable of great benefit and create great harm.

In Ohno’s view, every supervisor must be able to teach. Here, he’s primarily referring to the capacity to teach the line workers how to do their job efficiently, but I believe there’s a greater obligation to teach managers what it’s really like to be on the line doing the production work.

There’s no optionality to Ohno’s view on this subject. In fact, he states that he never gets upset with line workers – only supervisors and managers. He’s upset, because they’re not teaching or supporting the front line workers appropriately.

One of the hardest things for me to learn in developing training systems is that the best way to ensure students will remember what they’re taught is to get the level of difficulty right. Too difficult, and the student will give up. Too easy, and they won’t retain their learning.

Ohno instinctively knew this as well, and he encouraged the right amount of difficulty by challenging line workers to test their knowledge of how things worked with Ohno through experimentation. He made it uncomfortable to disagree with him but acceptable to do so – as long as people were willing to back it up by developing proof.

Black Swans and Over Optimization

The positive impact of Taiichi Ohno and the Toyota Production System should not be overstated. However, it’s important to recognize Nicholas Taleb’s counterbalancing argument from The Black Swan. We must be careful to not over optimize a system so that there’s no resiliency. We should eliminate as much waste as possible while recognizing that some waste is necessary. One of the early criticisms of the TPS approach was the impact when parts didn’t arrive on time. If the parts were missing, it would stop the line, and that would be a big cost.

However, Ohno, in alignment of desirable difficulty, contended that this would encourage work to ensure that it never happened – or, when it happened, that it wouldn’t be repeated. Ohno expected black swans in a way that many of his followers missed. Still, he admits that there were difficult times for Toyota, and the approaches he used still needed refinement. That’s perhaps one of the best things about and a reason to study Taiichi Ohno’s Workplace Management.