Working Out Loud: For a Better Career and Life 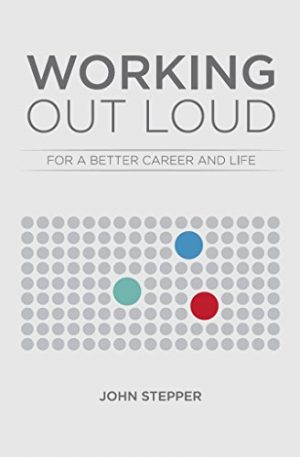 I’ve worked out loud in my career by accident. I started with editing then writing books. I started writing articles (because they required less effort) and I’ve been speaking for years now. In many ways, my life has been what Working Out Loud: For a Better Career and Life suggests – but it was nearly completely by accident. I started my blog in 2005 because the people I knew told me I had to have one. At the same time, I also had content that I wanted to write that no publisher wanted to buy. The blog now has more than 800 posts. However, there’s more for me to learn.

In my SharePoint world, there have been many people who have tried to convince me that enterprise social is the next big thing. Lawrence Liu and I used to have the most confusing conversations until he told me that I was doing the kind of social networking that the tools enabled – without the need of the tools. SharePoint implemented Likes, and newsfeeds, and etc. Microsoft acquired Yammer. All of this was noise because, for most organizations, they didn’t know how to share what they were doing. The corporate culture rewarded knowing but not sharing.

In my quest for knowledge management, I realized that the greatest use for the tools wasn’t cataloging the published information, but was instead helping connect people to one another. The knowledge that is made explicit necessarily loses the richness of context, and many times context matters.

So I’ll publically rib enterprise social technologies because they believe that by changing the technology they’ll change the organization’s culture – and the reality is that in the language of systems (see Thinking in Systems) the whole paradigm is wrong. We can’t expect that we can “just add technology” like “just adding water” and expect the organization to share, to work out loud and to help others. It – unfortunately – doesn’t work that way.

As I mentioned in my review of The Excellence Habit – none of us really know the course that we’re going to go down. In Analyzing the Social Web, I mentioned that our weak connections are often more important than our tight connections to finding a job (based on the work of Milgram and Granovetter). In short, there’s no way from inside the boat to know where the shoreline is. We need people on the outside to be able to help tell us where we are and help us navigate difficult waters. So we share what we’re working on and allow others to experience it, and look at how it might be helpful to them and how they might be helpful to us.

The key here is that when we work out loud, we create the opportunity for others to share their perspectives with us – to help us know when to adjust our course – and of course we allow them to build off of our work.

But I’m Not Done Yet

When I started writing articles, I had to accept that they had deadlines, and that meant that I had to get them done for the deadline. I didn’t have an infinite amount of time to get them to be “done.” The benefit of this was that I did get more articles done – particularly when I had a weekly column to fill for TechRepublic. The downside was that I was putting my thoughts out there before they were fully baked in many cases. There was more than one article that people ripped apart because they didn’t feel like it made sense. In some cases, they may have been right. In other cases, I never fully developed the end of my thinking, so the reader didn’t have the opportunity to fully understand what I was saying. (My fault, not theirs.)

An interesting aspect of working out loud that I don’t believe I maintain in my daily life is the idea of narrating my work. I do it sometimes, and that sometimes leads to embarrassments, such as the fact that I never released the governance DVD that I started working on years and years ago. I never felt like the content was good enough, so it sparked me on my journey of learning – but the much-promised DVD never materialized.

When Michael Hyatt speaks of a platform, he means your followers in the same way that Seth Godin means tribe. (See Michael’s book Platform for more.) When most of my IT friends say platform they mean Windows, Linux, or MacOS in the same way that networking means Ethernet and WiFi. Sometimes we – particularly technology folks – confuse the technology with the human factor connection. We’re wired for connections (see The Dance of Connection for more) and not of the Internet kind, but we all too often forget this important point.

I started this blog on Subversion. I migrated it to SharePoint many, many years ago. More recently, I moved it to WordPress. Certainly I could have decided, somewhere along the way, that it wasn’t easy to blog on Subversion so I should stop. Or I could have gotten frustrated with the SharePoint plugin that allowed for enhanced blogs – but that would have missed the point. Writing the blog isn’t about the challenges of getting the posts applied to the technology. The challenge was and remains to get good content up. That’s something to do whether the technology platform makes it easy or not.

It was popular for a while to speak of the idea of whether you’re a maker – someone who is creating something – or a manager – someone who is managing others who make things. For those of us who are entrepreneurs, the answer is almost always “yes” to both questions. Most entrepreneurs start out as the maker who is frustrated with the management they receive, and they just want to be managed in a way that works for the creation process. (See The E-Myth Revisited for more on entrepreneurs being technicians.)

The challenge with being both the maker and the manager is how you divide your time. I’ve spoken about flow repeatedly (Flow, Finding Flow, The Rise of Superman) and how flow takes some time to get into. Even with approaches for kick-starting the process, it really requires dedicated time. The manager, on the other hand, is always being interrupted. Their world is being in the middle of interruptions, so in that model it’s difficult to get dedicated time to create.

Working out loud requires a certain level of reflection and development of your thoughts. That means uninterrupted, flow-based, dedicated time to create things, and in some environments that is hard to get.

Working out loud is based on a foundation of four key ideas. These ideas are what I call “pillars” on top of which the working out loud approach is based. They are:

In truth, these pillars describe a way of looking at life. It’s looking at life from the lens of what you can do for others and how they can help you grow in a real way. It’s about a different mindset.

Carol Dweck’s work is quoted here about how a growth mindset can help children do better. By praising their effort rather than their results, children become more focused on working hard and less on believing that they’re fundamentally good or bad at something. As a result, they try more and fail more – so that they can succeed more too. (See Mindset for more.)

This growth mindset leads us towards more hard work over a longer time. This could protect us from abandoning our dreams before we’ve given them the proper opportunity to grow and thrive. By 2008, 95% of blogs were essentially abandoned. I’ve seen a sharp decline in the number of folks who were reading my blog via their RSS newsreaders – which was the primary way that most people were consuming the blog for a long time. (See my post The Rise and Fall of the Blog for more on my stats.)

As we look at working out loud as an idea, we have to consider how we’re going to have the persistence to keep going, even when it doesn’t seem like we’re getting anywhere. (See Grit and Willpower for more on being persistent.) We’ll have to figure out how to keep Working Out Loud.