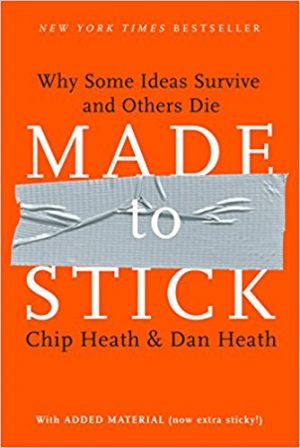 Honey. Duct Tape. Elmer’s Glue. They’re all made to stick, but they’re not the kind of Made to Stick that Dan and Chip Heath are talking about. They’re talking about those mental viruses that replicate inside your head over and over again until you want relief – and things much less pervasive but sticky nonetheless. What about those songs that get stuck in your head? What about the belief that autism is caused by vaccines? (See Science and Pseudoscience in Clinical Psychology for why this isn’t truth.) Some ideas and myths and ideas persist, and others gently fade away into the night.

How is this useful to most of us? How does knowing what makes an idea sticky or not help us in our challenges of living life? The answer may be connected to our desire to change our behaviors. How do we stick with our exercise regimen or stay on our diet? (See Change or Die and Willpower for more.) It’s also connected to our desire to market our goods and services in a way that people can remember.

The Heath brothers have distilled what they believe are the six principles that lead to stickiness. They are:

As they tear each of them apart, I saw connections. Simplicity is the opposite of complexity, which Rogers says is an opposing factor to the Diffusion of Innovations. Unexpectedness draws our initial attention, as is explained in Fascinate, Inside Jokes, Incognito, The Signal and the Noise, and others. Concreteness makes an appearance in learning in works like The Adult Learner, Efficiency in Learning, and How We Learn. Credibility and our ability to appear credible to our audience shows up in marketing books. (See the New Rules of Marketing and PR, Guerrilla Marketing, and Duct Tape Marketing.) Emotions are how we make decisions, as the Heath brothers describe in Switch, which they got from Haidt’s The Happiness Hypothesis. Stories are powerful, as we learn in Wired for Story.

These six principles are clearly connected to a set of works across disciplines and bring together a diverse set of forces that can help your ideas stick for as long as they need to.

While I love the success (SUCCES) acronym, I believe that the Heath brothers missed something. I believe that they missed the “Wow!” factor that leads people to pay attention in the first place. We’re in an attention-based economy, where we need first get people’s attention with some sizzle. We need the wow. I think that we need to represent all the vowels in our acronym – but not in the order they appear in the alphabet. First, I believe, we need them to say “Ohh!” (Our first vowel.)

From there, our idea must be Understandable (our third vowel). That means it needs to be both simple and concrete – because that’s the way that we learn things and the way that we can connect them to our other memories. (See How We Learn.)

The final vowel is E for Engaging, which encompasses the Heath brothers’ emotions and stories. This is setting the hook. It’s taking the idea that was noticed, pondered, understood, and accepted and then ensuring that it can be remembered. As humans, we evolved to feel others’ feelings. Mirror neurons literally fire in conjunction with others’ neurons. (See Primal Leadership for more.) As Wired for Story points out, we evolved to be able to learn from others through stories – so stories have a significant sticking power.

One of my favorite Einstein quotes is “make everything as simple as possible, not simpler.” Einstein wasn’t trying to “dumb down” relativity. He was trying to get to the core principles of it. He was trying to take the complicated and make it as simple as possible. In the language of the Heath brothers, simplicity is finding the core of the idea. It’s finding the essential and central point to be made. Instead of covering everything, it’s covering only those topics which are core.

Much time is spent making the point that, when you say three things, you’re really saying nothing. If you want a message to stick, you must pick the point to make – and stay with it. This is reminiscent of the Stockdale Paradox from Good to Great, where you must have unwavering faith – and the ability to listen and adapt. On the one hand, you need to listen to what you can do to make the message more compelling and resonate better with the audience, and on the other hand have the fortitude (or perhaps grit – see Grit) to stay the course. (My post Should You be a Fox or a Hedgehog? may shed additional light on the topic of creating simplicity.)

In my reviews of Selling to VITO and Traction, I mentioned that we live in an attention economy. If we want to succeed, we must attract attention – the right kind of attention to what we’re offering. We can’t demand attention. We can’t insist that someone read our email or watch our video. We’ve got to engage them in a way that makes them want to engage. This is where unexpectedness helps us. Jokes pack a one-two-switch punch, and when we detect that there was something unexpected, that our pattern matching brains were wrong, we laugh. In short, we get a bit of the pleasure drug dopamine for detecting the error in our thinking – the unexpectedness. (See Inside Jokes for more)

Many of the techniques that you’ll find in marketing books are about doing something unexpected to get – and hopefully keep – attention. The key contrast is in defining the brand message as internally consistent but externally (worldly) inconsistent. (See Brand is a Four Letter Word for more.)

Sometimes the dance to engage your audience is to tell them what they know – and then expose the gap that they don’t know about. Sometimes you must expose the thing that the audience already knows – but doesn’t know consciously – to get to the gap in their knowledge. You can’t realize that you don’t know what’s between you and your goal until you know what your goal is. You can’t find the path to success when you can’t define what success is. (The ONE Thing leads towards the idea of getting very clear about what your goals are.)

You can’t sell a product or service to someone who doesn’t know they need it. To help them understand their need, you must first help them be concrete about what they want, and then expose to them that they don’t know how to get there.

In my post Building the Market, I speak about the kind of effort that it takes to build a market and how it’s not the best plan for most organizations these days. Unfortunately, the need to create the demand and the realities of modern business are in conflict. Small businesses lack the capital and large organizations, driven by the need for quarterly returns, rarely have the fortitude.

In How We Learn, we are told that there are two components to memory: storage and retrieval. Storage seems to be the easier of the two components. It’s the retrieval that’s interesting, because the brain carefully prunes away connections that can be used for retrieval to allow us to function. Instead of everything being available at our fingertips, things are only available through a chain of thinking, like navigating down a folder hierarchy.

This pruning of the retrieval system doesn’t mean that we forget about the ideas we’re trying to convey. Instead, it means that the patterns for retrieval of that information become narrower and harder to hit. That’s why, when we craft our message, we craft it in a way that it can be retrieved. We try to ensure that the audience’s brain doesn’t trim those retrieval paths we need.

Velcro is interesting stuff. Designed by nature and copied by humans, there isn’t just one spot that the two pieces will catch together. Instead, any contact between the two pieces will create a level of cohesion. When creating our ideas, we try to craft the message in a way that, even if our intended connection isn’t made, alternative connections may help us hold onto the idea.

Much of the challenge of getting ideas to stick is to get them to be understood. Testing our memory is hard, because researchers realized that the different retrieval connections that people have for different ideas keep muddying up the water – until they settled on nonsense words as an approach to testing for retention. The intent was to create things that people couldn’t connect to existing memories.

Even random strings of numbers would connect with people. They would find an old area code inside the middle of a string and suddenly do better on the memory test because of the connection. In fact, the high-performance memory folks use this technique of making the numbers meaningful to them so that they can remember them. (See Peak for more on the memory experts.)

We remember those things which are concrete. In fact, we grasp the abstract through means of the concrete. (See Pervasive Information Architecture for more about this.) The Heath brothers call to concreteness as a tool to allow us to remember the idea.

Most people don’t understand statistics. Ask for an explanation of standard deviation, and you’re just as likely to get blank stares as you are to get answers that are materially correct. However, more importantly, people don’t connect with statistics. Statistics live in the analytical portion of our brains, and, as Switch and The Happiness Hypothesis point out, the analytical portion (the rider) isn’t in control. How to Measure Anything and Thinking, Fast and Slow both point out our inability to conceive of large numbers well. We’re subject to all sorts of biases and inaccuracies as our analytical mind attempts to wrap around the numbers we’re talking about.

To understand statistics, we need to create simplicity. To understand statistics, we must strip the complicated math and make the true value of the statistic – the ratio – stand out. It’s the ratio that makes the pie chart so valuable. Though it’s lousy at comparing year to year, it’s beautiful at showing what percentage of a pie was made up of one part of the total. People get it because they know what it’s like to give up a part of the pie.

It’s said that a million deaths is a statistic. A single death is a tragedy. The emotional aspects of understanding the story behind the one loss is within our capacity as humans. Comprehending the pain of the deaths of a million people exceeds our capacity.

In Pitch Anything, Klaff’s general premise is he who sets the frame controls the sale. If you can control the way that people see the situation, you can control the outcome. While this might be overstated a bit, framing is a powerful force for managing how people perceive anything. Framing sportsmanship as a way to honor the game that you love so much can take an abstract idea like sportsmanship and hang on it the trappings of honor of respect and have a profound effect on how people see their need to participate in games.

A subtle change with school children can be that they be framed as representatives or, even better, ambassadors of their school. As a result, they frame their behavior in terms of whether it will reflect positively on the school.

The frames that people use change with the circumstances they find themselves in. They can identify as child one moment and boy the next. (For more, see No Two Alike) By influencing which frame they use, you can influence how powerful an idea sticks.