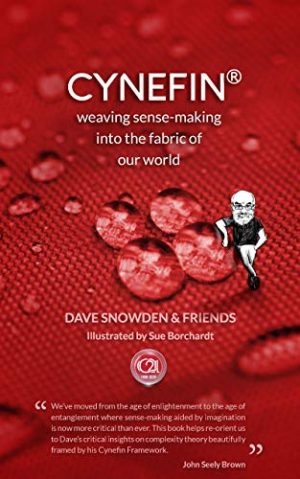 It was years ago in the subterranean conference center of a hotel in Washington, DC when I met Dave Snowden. He had a keynote speaking slot as well as a workshop. I had some breakout session that I had managed to get. I was speaking with a friend when I used the word “curmudgeon” to refer to my office manager, and I could visibly see Dave’s ears perk up at the next table. I convinced him to have a conversation with me the next day and via Skype some months later.

When I met Dave, he told me he had no intention of writing a book. That’s why when I saw the book Cynefin: Weaving Sense-Making into the Fabric of Our World, I was confused. As it turns out, Dave’s friends had finally persuaded him to write a book – or at least a few chapters, with them filling in the rest. The book is as interesting as the framework and Dave himself.

Among those who know him, Dave has the reputation of being a curmudgeon – a label that he embraces. Thus why his ears perked up when I used the word. Rarely does the word come up in everyday conversation, so it must have been like I was calling his name.

I got a chance to watch Dave in action for a few minutes in his workshop. He was practicing ritualized dissent. It’s one of many tools that he teaches to help people make sense of their world. It was the first time that I had seen the technique that I would summarily describe as being the devil’s advocate.

“While KM [Knowledge Management] is more or less dead strategically (although the practices remain)” is an odd statement for a man that helped to create it – but it’s a statement that I can understand him making. The conference that we met at was a KM World conference, and each year I’d leave it thinking about how lifeless it felt. There are some truly interesting and amazing people that go, and there’s the steady influx of new knowledge managers who are looking to learn the craft. In the mix, it’s easy to become frustrated and disillusioned.

That doesn’t make the skills any less important, it only makes them more expected. The last time that knowledge management made Bain and Company’s top 25 tools was 2011. Its removal from the list in 2013 prompted, in part, my work in Ark’s book, Unlocking Value: Knowledge Management as a Strategic Management Tool. All the authors wanted to convey the value that knowledge management still had as a strategic tool.

Proverbs 27:17 reads, “As iron sharpens iron, so one person sharpens another.” It’s ancient wisdom that is often forgotten in a world focused on harmony and keeping everyone happy. We’ve decided that conflict itself is the enemy. Instead of finding places where conflict sharpens our thinking, we’ve become threatened when there are disagreements.

We’ve even found ways to root out our own internal conflicts, the paradoxes that we hold inside our minds but can’t seem to solve have been swept to the back by our business and our beliefs that there must be an answer. However, we can’t let go of the paradoxes. We must embrace the land between the ideas. (See Fractal Along the Edges for more on these in-between spaces.

We cannot escape time. It flows past us moment by moment. This kind of time is chronos. It is metered and measured. However, there’s another kind of time – kairos – or the right time. It’s timing, and it’s accepting the timing that comes automatically. It’s rhythmic and right. It’s not forced but embodied in the idea that we’re living in the moment.

When dealing with complex adaptive systems – complex items – our best hope is that we can find the opportune time when the system is willing and able to change if we give it a little nudge – and if we’re brave enough to provide that nudge. Sometimes, systems can respond like falling dominos that are suddenly headed off in the right direction.

Snowden believes that you should teach by first providing some data then providing the framework later. It’s true that we grasp the abstract (framework) by means of the concrete (experiences or data). At the same time, it’s equally true that without a framework to hang the data on, we may ignore it or process it in incorrect ways.

This is a place where the answer seems to be not one or the other but iterative. Some advocate providing frameworks first then providing the data to support it. Others, like Snowden, are focused on data, then frameworks.

So, while I appreciate Snowden’s thinking on delivering data first, it’s important to think of this as an iterative process rather than a single direction, one-time flow.

Cynefin is designed to illuminate how systems are working and the kinds of responses and inquiries into the systems that are operating that may be fruitful. No matter where we are in the cynefin map, we must remain focused on finding the inherent simplicity of the situation. We cannot force simplicity upon the system – lest we run afoul of The Black Swan. Instead, we must seek to find the simplicity that exists under the currents of the outward manifestations of the system.

It’s not that finding this simplicity is easy or that the novice would even say it’s simple. (See Seeing What Others Don’t for more.) However, it is possible.

Cynefin is, like its caretaker/creator, a concept of wholeness and connectedness. If you’re looking to integrate your thinking about different kinds of changes and decisions, maybe reading Cynefin is the next right answer.