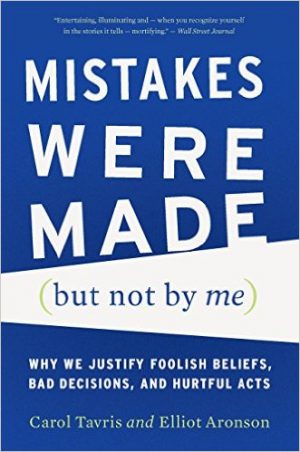 It’s shocking really. The lengths that we’ll go to when defending our position. It’s scary to think that one small move begets the next move and so on such that most people will administer what they believe to be life threatening levels of electrical shock to another human being. Milgram’s experiment placed students in the position of administering what they thought were shocks to a person in the other room of larger and larger voltages as a part of a research study. Little did they know it was their behavior that was being researched not the behavior of the person who was reportedly receiving the shocks. 65 percent of the students administered what they were thought to be lethal shocks without any persuasion. That number climbed to as high as 90 percent if a collaborator was added to the experiment.

At the end of the experiment, the behavior of the students would have objectively been measured as wrong but they obviously weren’t in the minds of the student at the time. It’s this slippery slope that Mistakes Were Made (But Not by Me) examines. (For more on the Milgram experiment see Influencer.)

We’ve seen the news story. Some guy or gal is lost at sea in a boat, life raft, or surf board and there’s video of a dolphin leading them safely towards land. Flipper would be proud that one of his distant relatives rescued a helpless human. This story, and the copy-cat clones of it, lead us to believe that all dolphins are interested in the health and safety of humans. It represents the best of the What You See Is All There Is (WYSIATI) rule as discussed in Thinking, Fast and Slow.

Whether we call them rules of thumb or stereotypes, we all leverage shortcuts to allow us to cope with the information overload we encounter every day (See The Information Diet and The Paradox of Choice for more on information overload.) The mental shortcuts we use are neither good nor bad. They’re useful and necessary to allow us to survive in the world. However, as stereotypes they cause us to make unfair assessments of people who are in a class other than ours. How other? is defined is irrelevant. By mere fact that we’re lumping a group of people together we’re eliminating the possibility for truly great people in the class.

Shortcuts are below our consciousness. Al Campanis knew his friend Jackie Robinson and defended him as a great baseball player while at the same time believing that black men couldn’t be managers. He used the mental shortcut (stereotype) of race to determine eligibility for baseball management.

It is because we use shortcuts that we’re particularly vulnerable to biases and blind spots.

Al Campanis didn’t realize that he was unfairly categorizing black men as incapable of baseball management. He didn’t see his bias any more than we can see the blind spots in our eyes where the optic nerve connects. (See Incognito for more on how our brain lies to us about our visual system.) Even enumerating a list of biases like I did in my review of Thinking, Fast and Slow doesn’t make us immune to the effects. In fact, the more certain that we become that we understand the effects of biases the more susceptible to them that we may become. The way that we best manage the impact of biases best is being watchful for them.

Being watchful is about accepting our fallibility and vulnerability. (See Trust=>Vulnerability=>Intimacy and Change or Die for more on vulnerability and fallibility.) The more certain that we become that we’re infallible the more likely it is that our faults will show themselves. So paradoxically we’re the most immune to blind spots when we are the least confident. Certainty is a box that prevents us from seeing reality.

The Anatomy of Peace spoke of boxes that we get in. These boxes distort our perception of the world. They prevent us from being true and authentic with others and ourselves. The Anatomy of Peace also lays out a technique for evaluating whether we’re in the box – and how to get out of it.

Memory is Not Memorex

There used to be a commercial for a brand of audio and video cassette tapes asking “Is it live or is it Memorex?” implying that one could not tell the difference between the live event and the recording. It would be great if our memories worked this way. It would be great if we could recall with absolute precision the events of every day of our lives. Unfortunately, this isn’t the case. Our memory isn’t like a data bank, a video recorder, or a book. The pages of our memories aren’t invariant. Our memories – we know – are fallible.

I’ve built an entire system around my memory for researching books. The process is the one that I described in Research in the Age of Electrons. If I need to review a book or evaluate my thoughts about something I’ve got the text from the book, my notes, and my blog posts. It’s striking to me how many times I find myself not remembering what I wrote about a book even a year ago.

Given the research says that one has little better than a chance of explaining what they might have said about themselves in their youth, I feel good that I mostly remember what I wrote.

Still this process is extremely time consuming and I only do it for the books I read. I have no way of recording all of the conversations that I have, or the things that I do on a daily basis.

The Dangers of Dehumanizing

Milgram’s experiments came on the heels of World War II and the holocaust. Many people were asking just how it was possible that people could treat other people so badly. How could so many people take roles in the extermination camps? Victor Frankl in Man’s Search for Meaning never wondered how people could be complicit in the camps – he focused on what it took to survive. The twists and turns of the psyche that allowed people to accept these conditions and to inflict them on others was the point of Milgram’s work.

We setup a viscous self-reinforcing system (See Thinking in Systems for more on self-reinforcing systems.) We do something bad to someone (or a class of people). Justification kicks in and we demonize and dehumanize them. We do even more awful things because they’re now less human. This is the cycle that created the atrocities of the holocaust. However, there is a way to prevent this from happening. (For more on demonizing see Crucial Conversations and The Anatomy of Peace).

The solution to the problem is compassion – love for everyone. However, compassion relies on changing the ratio of us vs. them.

The beauty of this is that you can quickly include people into your “us” group – instead of the “them” group by simply changing the way that you’re grouping or your scope. The tragedy is that the “them” group is vilified. They’re the bad guys riding on their horses with black hats. The” us” group are the good guys wearing white hats and out to save the day. Research says that just the concept of “us” vs. “them” causes us to react differently.

We tend to want to support and protect the people in the “us” group. We’re neutral or negative towards the “them” group.

One of the definitions for the “us” group that Buddhists use is the “us” group of humankind. This is a powerful “us” group because it includes everyone and it fosters compassion to everyone in the world. This definition of an “us” group leads to greater love and empowerment.

It’s got to be spooky. You see lights and you feel like you can’t move. You’re trying to figure out what’s happening and ultimately you settle on the idea that you must have been abducted by aliens who were using some sort of a force field to keep you still. After all, no matter how hard you tried to move you didn’t make any ground.

You’ve seen the stories in the news. People who were driving out in the country late at night and they were suddenly taken. They described their experience and they even said they saw aliens. You saw shadows but you don’t clearly recall any aliens directly.

However, like many of the Unidentified Flying Objects (UFO) sightings there’s a rational explanation and one which doesn’t rely on confusingly silent intelligent life from other planets. When folks are in that land between awake and asleep dreams can invade our conscious thoughts. (See Incognito for more of the games our brain plays on us.) When you couple this with the awareness that our brains shut down our ability to control movement when we’re in the deepest part of our sleep cycles you can start to see how people who were unable to move were really unable to move because their brains had shut down the ability to control movement. This is quite helpful when you’re dreaming so you’re not hurling yourself around the house as you are being chased by giant pink elephants. (Or is that just me?)

It turns out that the need for justification and rationalization leads us to some rather unexpected conclusions.

Sometimes the impact of what we’re doing isn’t readily apparent. As with the students at the beginning of this post who continued to escalate the voltage until seemingly lethal doses were being administered, we’re in the pursuit of a lofty and noble goal and along the way we get lost into a set of approaches, tactics, and techniques that are far from our noble purposes.

When it comes to getting bad guys off the street, there are few of us that would waver in our belief that we should do everything possible to catch them and lock them up. However, do we really mean “do everything possible?” We’ve developed a system of presumed innocence even as interrogation tactics that we use are designed to elicit a guilty confession from the suspect – even if he hasn’t committed a crime.

What if you really believe that someone is guilty. You can’t find the evidence but you just know that they’re guilty. Should you plant a bit of evidence so you don’t have to find the real evidence? What if it gets one bad guy off the street and you were sure that it was right? The next time that you’re a little less sure that someone is guilty you might be inclined to plant evidence again – because it worked last time.

What about those interrogations? Are you a failure because you didn’t elicit a confession from the innocent man you’re interrogating? Who wins if you’re able to use your understanding of psychology and interrogation techniques to coerce a confession out of an innocent man? But that could never happen you say. Innocent people don’t confess. You would be wrong. Innocent people when confronted with confusing and contradictory evidence (or bluffing) will create a story to make the information make sense – and if the only story is the one the interrogator is sharing then they may just accept it.

To protect yourself you decide that you don’t interrogate innocent individuals. You lie to yourself so that you can reconcile your behaviors with the honorable person that you believe yourself to be.

Ultimately the truth of our situation is that all of us – every one of us has biases in how we relate to others. We are subject to the biases that all humans are subjected to – whether we have a PhD or we’re a high school graduate. Sometimes we have to say that “Mistakes were made”. If we’re brave enough to behave like John F. Kennedy, we’ll say end with “by me” instead of “but not by me.” If you’re willing to see how biases influence you, perhaps you should read Mistakes Were Made (But Not by Me).