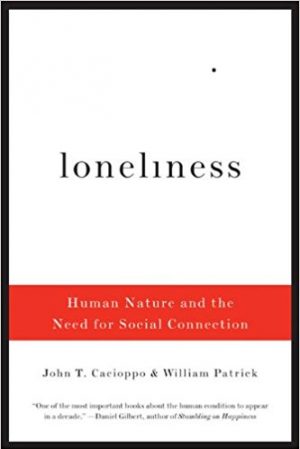 It was early in my career, and I was given the opportunity that most people dream about. I got to go to London for work. It was a dream, because it meant that the company was paying for me to travel “across the pond.” I thought of all the things I’d see and all that I’d do. In the end, I spent more than a day of my precious time in a hotel room wondering why I was there and when I could get back home. It was the time of the most profound loneliness I can recall. I had recently split up with my girlfriend, and in this time before Skype and cheap (or free) long-distance, calling my friends at home wasn’t a great option. It was at this point that it would have been good to have read Loneliness: Human Nature and the Need for Social Connection.

I managed to pull myself from my hotel room one evening to walk around London after dark –no one else with me. I’m not quite aware even now where I was, but I’m sure I shouldn’t have been alone. Walking by a church, I had a man come up to me and ask if I could spare any money to help his family. A hundred or so feet away, I could see a mother and two kids huddled together in the shadows of the church with just a few blankets. It was cold enough that I was wearing my winter coat, which had big pockets. I reached into one and pulled out a fistful of coins and handed them to the man.

I was in a sort of daze. I wasn’t familiar with the coins in the UK at the time, so I just dropped all my change from my excursions in my pocket, figuring I’d sort out later what was what. I honestly don’t know how much I gave the man that night, but I remembered thinking that it was sad that they had no place to go – and good that they had each other.

Loneliness isn’t about being alone. It’s not the lack of other people with us or around us or talking to us. Loneliness is a feeling that need not be congruent with our physical experiences. We can feel loneliness when no one is with us – or when there is a crowd.

When my brother died, I was surrounded by people at his visitation. The noise was deafening. It felt like everyone in the small town had come by. Officially, there are 9,000 people in the town, and, unofficially, the count of people at the visitation was 8,000. The line of people wrapped down the hall and out the door. No one would imagine that, being in such a crowd, someone could say they were lonely.

Despite this, I was lonely. I’m not saying that I don’t appreciate my family or my wife. I’m saying that the feeling was pervasive and completely disconnected from the objective reality of the situation. While my loneliness was profound, it was greater for his wife. In the years since the event, we’ve shared that the same sense of loneliness descended upon us in the midst of so many people. (See Rusty Shane Bogue for more of what happened.)

Loneliness is a feeling, a mood, a perspective on life. It shapes and colors how we react to others and how we see the world. It is also a natural part of life. We all feel the sting of loneliness at times. While unpleasant, it’s not unexpected. Loneliness isn’t itself a mental disease – at least, not one recognized by DSM V. However, loneliness and depression do a two-step dance that’s hauntingly captivating.

Depression may be defined by sadness and lack of energy, but the characteristic that’s the most defining and challenging is the power that depression has. It can rob you of your ability to feel joy. It’s like a thief who steals the ability to feel happy. In doing so, it sucks people in and pulls them down like the vortex created by a sinking ship.

Depression is, therefore, separate from loneliness, which is defined by the lack of connection, but it’s loneliness that can be a forebear to depression. It can predict those who are at risk, in no small part because we are designed for connections, and when you can’t make them or tend to them you end up with none – and develop depression.

The sinister scheme of loneliness – as if it could have a scheme – is that it can bias your choices towards relationships. It can make it harder to find and form the very relationships that are capable of lifting you out of the pit of loneliness. Relationships are at the heart of life. We are social creatures, who are designed by evolution to crave connections with others. (See The Blank Slate, The Righteous Mind, and Bowling Alone for more on social connections.) We survived as a species because of our ability to connect and protect one another. Our ability to band together and defend each other as a group allowed us to triumph over our evolutionary rivals and take control of this world.

Relationships are the threads that weave the tapestry of life for social creatures like humans. Despite the belief that Americans are rugged individualists, we left for the West in convoys and wagon trains. We have always huddled together and honestly struggled together. Loneliness prevents us from seeing the tapestry and the threads and, at the same time, seeks to stop us from weaving more.

However, when loneliness has a strangle hold on you, it’s hard to pick up the phone. Experience in weightlifting isn’t enough to overcome the weight of the phone, dial a number, and lift it to your ear. The muscles don’t necessarily have the strength when the mind and mood aren’t willing. You can find the persistence of loneliness a constant companion, like a dark shadow on a bright day.

At its core, loneliness is a compelling character. In our history, to be alone, to be outside of the community, was a death sentence. It’s no wonder that evolution taught us not to like loneliness and encouraged our desire to stay with others. After all, it’s with others that we’re the safest (on average). Loneliness necessarily triggers stressful responses and inhibits our access to the social skills that we need to develop new relationships. (See Why Zebras Don’t Get Ulcers for more on the impact of stress.)

One of the most interesting learnings for me in quite some time is how difficult it is to receive love. So many people have closed themselves off from the ability to be loved because of an experience in their past or, more specifically, a close betrayal. For these pour souls, no matter how much love others send out to them, they can’t receive it. Loneliness has the effect of reducing our ability to receive the love and connection that others emit towards us. Loneliness drives us to question all our relationships and wonder why other people are in relationships with us – and when they might withdraw their relationships from us.

In my post Trust => Vulnerability => Intimacy, I hint that love is intimacy. Love is the ability to be connected with someone so completely that there is no need for barriers – not that you’re enmeshed or can’t tell where you end and the other begins, but rather that you are comfortable with those distinctions and see no need to protect them.

Think about it this way. You have lockable doors between your house and the outside world. You ensure those doors are locked at night. This separates the inside from the outside. You have a door to your closet, and it may even have a handle. However, there are no locks between bedrooms and closets, because there doesn’t need to be one. Can we distinguish between the bedroom and the closet? Yes. However, there isn’t a need for protection to protect one side from the other.

Some folks have installed locks on all their doors. It’s like loneliness has caused them to expect monsters in their closets. The locks protect them – and at the same time, isolate them from the connection that can come by interacting with others.

Birth of the Social Creature

If there’s any doubt that we’re social creatures, it’s possible to consider the artifacts that evolution has left with us beyond our gathering together into communities. We can consider how we have pair bonding (male and female together) for the purposes of helping to raise a child. We come together to ensure that our progeny have a good chance at survival, and the best chance seems to be for two parents to pour their resources into children together – rather than leaving the responsibility to the mother alone.

Our massive brains may be a great advantage to us, but it simultaneously means that we must emerge from the womb as dependent creatures who rely on our parents for everything for several years. Our brains are not fully developed and take time before we can be on our own. Consider most of the animal kingdom, where animals are born and walking within minutes, to the year it takes us to take our wobbly first steps.

Genes that Made It So

A great deal has been made about heredity in No Two Alike, The Nurture Assumption, and The Blank Slate. The quick summary is that about half of us is driven by genetics. The other half is, well, anyone’s guess. We chalk it up to environment, because that the only other answer we have. That being said, most people have a misconception of genetics. Darwin is taken too literally, and we believe that survival of the fittest means every creature is competing at every level for their lives.

However, this is not the operating unit of evolution. Evolution works at the group level. It creates greater opportunity for genetic propagation through our ability to work together. Even if I don’t survive, the genes that I carry may survive through one of my relatives – that my death served to protect.

There’s compelling evidence that reciprocal altruism works best for the survival of a gene when that gene is shared by your kin – or, to a lesser extent, the tribe that you’re in. One person can die so that their genes can live on in their children, their siblings, or their extended family.

Evolution selected us to protect others in our group. In doing so, it wired us for the kind of connection necessary to be willing to do this. It made strong us vs. them distinctions and encouraged us to sacrifice – and perform violence – to protect the folks that are “us” at the expense of “them.”

Perhaps the greatest irony may be that genes aren’t the be-all and end-all when it comes to replication. Richard Dawkins was on to something. He coined the term “meme” as a corollary to gene in terms of cultural transmission. For me, this is interesting, because I wonder how many genes have changed during the life of ideas. Whether the idea was correct or incorrect, I wonder whether genes have come and gone inside the space of a meme.

Shared ideas may just outlast genes – and they may be able to connect us together and fight off Loneliness.