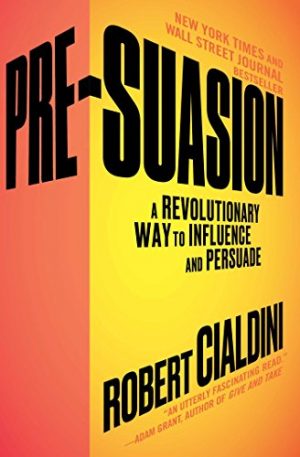 What can you do to make people more likely to accept your proposals? That’s the key question Robert Cialdini answers in Pre-Suasion: A Revolutionary Way to Influence and Persuade. He’s the same author who wrote the classic book Influence. His point is that the most successful sales professionals aren’t persuading in their actual ask. They’re preparing the person to be more receptive before they make the ask.

Influence has very little to say about trust. Pre-Suasion acknowledges the power of trust to shape the receptivity of someone – both positively and negatively. If you’re interested in trust, see my post Trust=>Vulnerability=>Intimacy, Revisited. If I have one criticism of Cialdini’s work, it’s the limited weight he assigns to the role of trust in a situation – and the ability that we can signal others to trust us.

The homage he did pay to the topic was in the form of a story: a sales professional asked a couple if he could be allowed to let himself out, get something from his car, and let himself back in. This fairly innocuous request – they were, after all, home and had met him – subtly changed him to be the kind of person they’d let walk into their home. This was a nudge that made the difference in at least some people, as his sales performance demonstrated.

Cialdini believes that many of the tactics he describes in Pre-Suasion have a limited lifespan. The techniques open a limited time when a person can expect a biased response. Contrast this with Influence, where he explains six factors that have a much longer lifespan of usefulness. The impact of being allowed to walk in their home may last for the current visit – when he walked in unescorted – but sometime later, that effect may have been completely wiped out.

As a result, it’s not just the fact that you were able to execute a move to shift someone’s perception but that these were timed so they could be effective at the time of the ask.

The actions we’re asking for won’t happen unless we can create a compelling vision for the end state. We can’t expect we’re going to get anyone to move if they don’t know where the destination is – and how we intend to help them get there. Few people would start down the road without knowing where they’re going, yet when we try to persuade people, we often fail to help them see the vision we have and why it’s desirable for them.

Hope, as C.R. Snyder says in The Psychology of Hope, is made up of willpower and waypower. Willpower is the desire to see the vision of the future come to fruition. Waypower is learning what steps can be used to help us get there. In casting our vision for people and asking them to join us on the journey, we must ensure that we share both the destination and we must help them understand how they’re going to get there.

Identifying with the Change

If you really want someone to take action, make some aspect of your ask seem like it’s the kind of thing that people like them say yes to – even if you had to ask for smaller commitments to get them to focus on this aspect of their identity. If they’re civic-minded – due to identifying as that after an earlier, smaller ask – they’re more likely to respond when asked to do something civic-minded, if the ask is framed in a civic framework rather than a more generic framework.

Sometimes all it takes to create the connection is a question. You can ask someone if they believe they are some desirable trait – for instance, adventurous. Most people, when asked if they’re likely to have a desirable trait, will say yes. Once they have identified with the desirable trait, they’ll feel compelled to behave in a way that’s consistent with their newfound identity in the trait. If you ask someone if they’re adventurous, they’re likely to say yes, and if they do, they’re more likely to be willing to take a risk to fill out a survey, participate in an interview, and so on.

In training and development circles, there’s an awareness that the difficulty level for effective learning is a narrow band. It needs to be significantly challenging enough that people feel they’ve conquered the learning but not too challenging. It can’t be too easy, because people will feel as if it’s beneath them. The same is true of people and their ability to engage in the information. Dr. Erikson used to wait for times when a truck was struggling to climb the hill outside his office and would then lower his voice. This forced the person in his office to lean in and listen a bit more intently, subconsciously cueing them that they should pay more attention to what is being said.

When we cause people to listen a bit more intently, they’re naturally inclined to pay more attention to what they’ve heard.

Sometimes, the ads we see are shaped to fly under our conscious radar but leave a sticky residue on our subconscious to pull us back to a website that we visited. The ads may seem repetitive to the trained observer and the creator of the ad; however, it may fly under the radar to the point where it creates an affinity, even if it’s not conscious.

Another way that marketers bias our opinions is by asking about our opinion of their products – and only their products. The detailed evaluation of a product – without considering competitive offerings – tends to improve our perception of the product and not the rest of the market. Perhaps in our need to be heard and understood, we value those people – and, by extension, products – that are interested in what we have to say.

The Face of Blame

We tend to assign accountability to people – and more specifically to the people we see. If we see people, we assume that they’re causal to whatever is happening. The president is assumed to have the impact on the economy, but most economists agree that the factors that lead to economic stability, growth, or decline take place well before the current president is elected. If you’re going to be interviewed as a witness to any sort of crime, you may want to think about positioning of the video recorder. When we see people speaking about something, we believe them to be causal to the situation, so a friendly chat as a witness may move you into the suspect category if you’re being filmed and others are going to watch it. In that case, you want to make sure that you’re not the only one on camera – looking straight or nearly straight into it.

In fact, if you happen to be convinced or coerced into signing a confession – even if you renounce the confession later – you’ve got an 81% likelihood of being convicted, even if the confession is false (that is, if you’re really innocent).

There’s more to it than that. Sometimes you want to sell being a part of a crowd. It’s about belonging and being a part of something. Other times, you want to sell to the message that you’ll be able to distance yourself from the crowd. It turns out that, when you’re watching something frightening, advertisements about belonging work better than those that have you stepping out from the crowd. Conversely, if you’re watching something that’s romantic, messages of separating yourself from the pack work better. (This is perhaps to give you that added edge in your own romantic endeavors.)

Have you ever found yourself in a conversation with someone and realized that you were drifting your language towards theirs? Maybe it was the words they were using or just the inflection of their voice. Perhaps it was the southern drawl when you’re down south. This natural tendency to mimic other humans is built in – and it’s powerful. Waitresses who more closely matched the speaking style of the diners got larger tips. Even Larry King and his guests would align to each other’s messages. If the person was higher in stature than Larry, he’d adapt his speaking. If they were lower, they’d often adapt their speaking to match his.

Mimicry works throughout the animal kingdom. The more we feel like we belong, the more that we feel comfortable. (See The Deep Water of Affinity Groups for more.)

There’s a fallacy about ourselves. We believe that we’ve always been the way we are today. We accept changes begrudgingly. We look back at our previous pictures and recordings of ourselves and wonder how that person could be us. There’s a sort of tension between the acknowledgement that the picture was us and the simultaneous belief that we’ve always been the way we are now. We believe our identities are fixed points instead of the relatively fluid and floating things that they are. Kurt Lewin described behavior as a function of environment and person. While he didn’t note that the person is constantly changing, he did acknowledge that our behavior is not completely dependent upon ourselves. Heraclitus said, “No man ever steps in the same river twice, for it’s not the same river and he’s not the same man.”

The fluidity of our identity can be exploited to create the illusion of greater capabilities and a deeper connection. When we work closely with someone, there’s a temporary merging or comingling of identities. We tend to attribute more than 100% of the benefits to ourselves and the other person, because, at some level, we’re not completely distinct any longer.

If I wanted you to accept my assertions here without question, I’d deliver this to you while you’re distracted. I’d put you on a bus. I’d have you in a noisy environment where concentration is required. The cognitive capacity to question what your hearing is a secondary step – not a primary one. In distracted situations, people will often accept what they’re hearing as fact, even if it is absurd on its face. That’s the trick sometimes used by marketers who are trying to get you to make a quick decision – and by social engineers hoping to get one past you.

If you want to figure out how to avoid the traps that are laid out for you, maybe you should do a bit of pre-reading of Pre-Suasion.