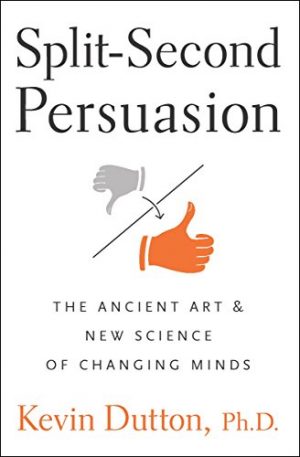 You’ve only got an instant, and you’ve got to make the sale. Whether it’s literally selling to someone or selling the big idea – or even your potential as a romantic suitor – Split-Second Persuasion: The Ancient Art and Science of Changing Minds is designed to help give you the tools you need to make it happen.

The secrets to making the split-second persuasion are diverse and subtle. They’re the actions that masters of persuasion use but go unnoticed, like a magician’s sleight-of-hand: they’re in plain sight and most of us don’t know when they’re used on us.

Some things are hardwired into us. They’re instinctual. They’re the things that we do without thinking or having ever learned. Birds avoid other predatory birds by their shape. A tell-tale signature of dots on a beak or a specific sound can engage feeding or nurturing instincts in birds. (See The Tell-Tale Brain for more about these key stimuli.) Other animals have key stimulus that they recognize and respond to.

In general, techniques for persuasion are built on top of these ancient and unseen forces that cause us to act without thinking.

In Play, there’s a scenario with a bear and a dog. They play, because the dog signaled “play” by bowing down on its front paws and wagging its tail. The bear could have ripped the dog apart, but knowing the signal was play, opted for that instead. The ways we diffuse conflict can follow similar ingrained patterns.

Marcus worked at a job center where conflict was common but never seemed to have any problems. His simple recipe for avoiding conflict involved two ingredients. First, he sat on his hands – thereby asserting submission. Second, he sat slightly lower, further signaling that the client with whom he was working was more dominant. As far as could be determined, just these two aspects allowed him to diffuse conflict in a conflict-infused situation.

Woven throughout our psyche is the desire to believe we have control. Whether you’re focused on Seligman’s classic experiments (see Flourish, The Hope Circuit, and Positive Psychotherapy for my discussions on his work) or you’re more interested in application of the principle for our desire to control, our belief in our ability to control is always there. (See also Compelled to Control.) We see our ability to control even when we don’t have it. We crave it.

If you’re trying to quickly diffuse a situation, the number one approach is comedy. In Inside Jokes, it is surmised that laughter is the error detection routine of our minds. Our minds are prediction machines. They’re constantly trying to figure out where things are going, and comedy deliberately exploits this to allow people to make incorrect assumptions then at the last moment pull the rug out from under them. In comedy, it’s a step, step, change maneuver that has two comments headed in one direction and then a quick change to show that the mind of the audience was wrong. This is one of the reasons why it’s rare that a joke will seem funny the second time you hear it.

In the conflict scenario, comedy triggers the idea that the situation may not be what it seems – and therefore things should be reevaluated. Often, this reevaluation allows the people in conflict to reassess their positions – though this mostly happens unconsciously.

It’s also an opportunity for persuaders to capture the mind by deliberately causing the brain to deploy more resources to try to resolve the discrepancies.

Eyes are called the window to the soul. They are one of the best ways for us to understand what is going on with the other person. Another person gazing in a direction will almost always draw our eyes to the same spot. In Thinking, Fast and Slow, Daniel Kahneman describes the work of Eckard Hess, who discovered that our pupil dilation changes when we become mentally engaged. The more mentally engaged we become with a thought, the larger the dilation of the pupil – for the moment or two while the processing is happening.

Many books have discussed the importance of eye contact for a variety of reasons (see Words can Change Your Brain, A Fearless Heart, The Ethnographic Interview, and The Science of Trust for just a few). However, Split-Second Persuasion makes the point that the more dilated eyes are, the more interested we perceive the other person to be in us. (Perhaps that’s one of the reasons you can’t have a romantic dinner at a fast-food restaurant where the lighting is bright.) Because of reciprocity, we are more interested in those who are interested in us – and so we begin to develop a slight relational edge with slightly larger pupils.

In instructional design, we’re aware that students have a limited capacity for conscious thought. The complexity of the thinking – their cognitive load – can’t exceed their capacity if we want learning to happen. (See Efficiency in Learning for more about cognitive load.) If we exceed cognitive load things start to get dropped. It’s this principle that can be used to persuade people to be less aware of our actions.

The normal sense for verifying the men were legitimate was waived when the reception desk no longer had the capacity to process it. The guest wasn’t real. The call was timed to allow the two accomplices to gather the gifts and leave without deeper skepticism.

In The Deep Water of Affinity Groups, I explained how groups work and how we elevate those who belong to a group that we belong to – whatever the group is. Inherent in this elevation of affinity is our need for belonging. Our need for belonging even drove the subjects in Solomon Asch’s experiments on line length to mis-perceive something obvious – which line was the same length as another. (See Nudge for more on Asch’s experiment.)

Our dominance on this planet required our ability to work together – to belong to a group – and that has left us with a strong need for belonging. (See The Organized Mind and The Righteous Mind for more.)

Reciprocity is a powerful force. If we do something for someone else, they are more inclined to do something for us. The funny thing is, the thing we do for the other person need not be anything large. It just needs to be perceived as something. (See The Evolution of Cooperation for more about how we might have evolved for cooperation – and tit-for-tat.)

Reciprocity kicks in when the person believes we’ve done a good deed for them by letting them off the hook for the big ask so quickly. Anchoring makes the smaller request look even smaller than it really is. As a result, concessions often seem much larger than they are – and that helps them get accepted.

“Can I call you back in two weeks to see how you like it?” asks the person over the phone. In their pause, you murmur a “yea, um, sure.” The result is that you’re more likely to answer the phone in two weeks when they call – whether or not you paid any attention to the rest of the call. Even weak commitments have a strong pull on us as we try to behave in ways that are consistent with our word.

The persuasive trick is to gain explicit permission or acceptance at one point and then later follow up on that permission. Once someone has given their permission for a follow up phone call, you’re in. Of course, at the time, agreeing to answer a question or two at some point in the future seems easy enough.

However, the way that majority and minority opinions work in groups is different. As seen in Asch’s experiments, there’s a strong draw towards conformity and the desire to answer in a way that’s like others. The minority, however, fights through reshaping the conversation. (See The Marketing of Evil for more about how the minority reshapes the thinking about a topic.)

One of the things that troubled the world was how Hitler could convince soldiers to help him commit the attempted genocide of the Jewish people. Moral Disengagement explains how Jews were dehumanized through persistent communication. Through repeated propaganda, it was possible to separate the Jewish people from the brotherhood of humanity in the minds of loyal Germans. This was, of course, an unspeakably evil thing. However, it is a reminder of how powerful repeating a message can be.

It wasn’t that the Germans started out thinking of their Jewish friends and colleagues as sub-human. It’s only through constant bombardment did their beliefs slowly start to shift in this direction. This shift allowed the parties involved to accept their part in the slaughter of millions of people.

Another demonstration of the power of a persistent message came from Jim Jones and the People’s Temple. Jones’ constant communications allowed him to be perceived as a god. As a result, he had the power to persuade 900 followers to drink poisoned Kool-Aid, thereby killing themselves and their children.

A Little Bit of Spice

Dutton believes there are five axis to push persuasion:

In today’s world, the idea of social proof is important. It doesn’t matter whether the proof is a single number (or, more often, star rating) without any names attached or a review with only a first name associated with it. We believe that, if others like something, then we should too – even if the people who are the social proof are make-believe people we’ve never met.

The truth is this works because we have such limited information to process an overwhelming array of options that even a little bit of data resembling something useful is something we’re willing to latch onto and use. Social proof is our way of shortcutting the long process of detailed evaluation.

As humans, we really can’t do things at one time. We can’t multitask, and we can’t effectively observe for multiple things. What we perceive to be multitasking is rapid task switching, and research has confirmed that this makes us slower and comes with additional cognitive burden. Experiments like The Invisible Gorilla show that if we’re asked to attend to one thing – the number of passes made by people in white shirts – we’ll miss something that should obviously grab our attention – like a gorilla walking onto the court and beating his chest.

Magicians and illusionists have made a point of movements with flair to distract us from the real movement they’re doing to accomplish their illusions. In our persuasion, we find that incongruence can be a powerful way of gathering attention. When we discover incongruence, we want to investigate.

When we say something without saying it directly, we create an inside joke. It’s an opportunity for the reader or listener to believe they’re a part of a secret club that not everyone is a part of. By alluding to – but not being specific about – something we’re talking about, we build commonality and connection where none existed. This connection, then, gives us power to persuade.

Dutton makes the point that psychopathy is a continuum we’re all on. Unlike their portrayal in movies and TV crime dramas, not all psychopaths are cold-blooded killers. There are many psychopaths, and they can – and often are – valuable, productive members of society that aid in the common good of man.

Hot emotions are the kinds of emotions that we associate with temporary insanity. There’s not much – if any – rationality to it. It’s raw, unbridled feelings, and it’s the kind of thing that persuasive people tap into. Cold emotions are calculated. They’re about the rationality of the greater good – without the entanglements of hot emotions.

Maybe you can decide that it’s time to read Split-Second Persuasion – with a bit of split-second persuasion.