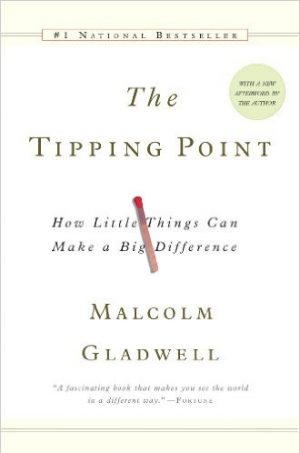 If you’ve been reading this blog then you know that I’ve been doing a lot of reading of my own lately, mainly associated with some professional development in the area of reconnecting to basic software development fundamentals that I’m already aware of and some new things as I try to find some new ideas in the various forms of the agile development movement that I can use or try.

The latest book is radically different.  It’s one that was casually mentioned to me by a colleague, Jeff Juday, who was recently awarded Microsoft MVP status.  He mentioned how he thought the program related to the book he had just read, The Tipping Point.

This piqued my interest initially because I’m always curious about how the market works and Jeff promised the book would have some insight.  (He was right.)  Having written (or written part of) 16 books, I know how random sales can be from one title to another.  In fact, when my friends and colleagues approach me about writing a book and ask me if their idea is a good idea, I usually respond with I have no idea.  The market seems to work in mysterious ways.

The Tipping Point is a book about epidemics.  Not so much the negative things as we associate with the word epidemics but rather about things that have a radical growth cycle.

At some point in the book, I wanted to share a passage with everyone I knew.  Some of my mentors, the pastoral staff at the church I attend, my mother, several of my friends, and some of the folks I know at the MVP program at Microsoft.  The truth is that when I finish this blog post many of them will be receiving a link via email to check it out – excluding those I know read my blog regularly and so they’ll see it anyway.

I found the book enthralling as I examined some of the market reactions I had seen.  The birth of the Internet (really the adolescence of the Internet), the growth of cellular phones (which the book discusses), and I even thought about it in terms of SharePoint Portal Server.  (For the record, I would have written this blog post even without a SharePoint tie-in.)

I remember working with the 2001 version of SharePoint Portal Server.  When I’d talk with my peers most of them would be asking me – “Share What?”  There weren’t many people that knew what it was.  Today, when I talk about SharePoint to people I meet – even outside of the industry – I get a surprisingly high awareness rate.  Most don’t know what it does exactly but they know that people think it’s something to watch.  (As a sidebar, most people who do SharePoint work don’t know exactly what it does.)

The interesting thing is looking at this pattern – and others – and evaluating why SharePoint is such a pervasive word in the IT industry and in the minds of small business owners.  It certainly can’t be attributed to the stellar marketing that Microsoft has done for the product.  (Sorry guys.)

Quietly you’ll get some of the marketing folks in the information worker group to admit that there’s a lot of confusion about SharePoint and few places to find good answers.  I’ve had clients pay for us to develop documents that they can use to internally explain the solution – because it’s simply too hard to do without clear documents on what it does and doesn’t do.

SharePoint isn’t successful because of a greater number of people running Microsoft Office.  SharePoint’s popularity can’t be explained by a renewed interest in IT.  It’s an absolute mystery to me as to why it’s become so popular.  (Here’s a challenge – tell me via email why you think it is so popular.  I’d love to hear your perspective.)

The Tipping Point didn’t explain why SharePoint has become so popular but it did give me the clues to look for to identify what happened.  I don’t have the answers but I do at least know some of the questions to ask.  In that way, I think it will be invaluable in the way it allows me to see things more clearly.

The analogy that I’ve come up with to explain it is that it’s like someone with imperfect vision – like myself – putting on glasses for the first time.  It doesn’t make me see or allow me to see for the first time but it does bring more clarity to what I’ve been seeing all along.  The unfortunate thing is that it has also exposed me to how much I still don’t see.

There are some psychological tenants that most people subscribe to – including me.  That I know believe are false.  I’m questioning how much about the way people behave is about their character and how much is about their circumstances.  (In an interesting turn of events, the environment swapping movie Trading Places was on TV last night.)

If you’re the least bit curious about how trends get started and would like to get a little bit better picture of them I highly recommend reading The Tipping Point.