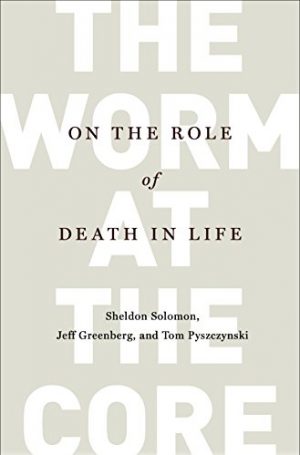 What if everything that we did in life was designed to help us avoid the terror of our own death? What if we could explain everything from a framework that presumes everything we do is driven by an unconscious motive to transcend death? That’s what The Worm at the Core: On the Role of Death in Life sets out to prove. Extending the work of Ernest Becker, the authors seek to show us how we work towards ways of transcending the death that we all know comes for us one day.

Self-awareness is a gift of the human race. It’s our ability to recognize ourselves and, to at least some degree, self-monitor what is going on with us. However, when it’s coupled with our ability to mentally travel through time to the past, present, and future, we’re left with the stark reality that one day we’ll all die. Whether we experience mortality through the death of a pet or a loved one, there are always reminders that death waits for us all. Our ability to project ourselves into the future confronts us with the reality that the day comes for all of us.

In the 1983 movie Krull, the race of cyclops traded a second eye for the ability to see the future. However, the deal was made with a witch, who tricked them. They can see the future but only one event in the future: their death. Rell, the character we meet in the story, explains that a cyclops can seek to avoid their death but only with the consequence of great pain. This is a vision of the human condition where we’re able to see – or simulate – the future and how we might die, and it’s a terrifying thought for many of us.

Nearly every culture that we’ve ever discovered has a fascination with immortality. Some focus on reincarnation – that is, coming back again as another human or another animal. Others are focused on a soul or a spirit that transcends death and enters an ethereal plane. Whatever the specific approach, in most cultures, there’s some sense of life continuing after death. While this seems to be a bandage on a broken arm, it’s something that we all cling to when we’re personally near death or experience the loss of someone near us.

Immortality may also be sought in other ways. Directly through our progeny (children) and the continuation of our genetic material, or indirectly though our memories living on. If our children are unable to carry us in their memories, we can turn to claiming our 15 minutes of fame and ensuring that the world won’t completely forget about us.

However, both direct and indirect approaches for us to maintain immortality eventually fail. The great pharaohs of Egypt are long since gone and many monuments have been found for which we can find no record of who is buried there. In short, the sands of time eventually erase all marks that we make as humans – no matter how terrifying a thought we find that to be.

Our reality that we cannot escape death leads us to seek comfort and safety in some predictable – but not always productive – ways. When reminded of our mortality – when we’re briefly shaken from our death slumber – we react in ways that confirms our values. Even judges, who are supposed to be impartial, when reminded of their death levied a 9x fine in the case of a person who was soliciting for prostitution. Instead of the normal $50 and time served, they levied an average $455 fine. None of them realized that they had done it because of a simple two question survey that asked them about death. The person wasn’t really a case for them but was a test to see if a brief reminder of mortality would have any impact on their sentencing at all.

As a result, if you want to get people to be more protective of their group – their nation, their religion, their ethnic class – remind them briefly of their mortality and watch as the sentiment for the group increases. We saw this in the United States after the 9/11 attacks, when everyone flew American flags and were committed to protecting their fellow Americans.

There is, however, a downside. As we are increasingly sympathetic to our “in” group, we become less tolerant of the “out” group. Those who aren’t like us, who are different, or who don’t fit our beliefs are more critically judged, shunned, and ostracized.

It’s important to note that the clinical research has shown these strong effects for reminders of our mortality only. No other loss seems to trigger the same kinds of reactions. This places our mortality and the threat of death into a totally separate category than any other loss. Because death is final, it seems to get some special weight in our mind and in our reactions. This is true well below our conscious thoughts.

The true danger is in accidentally triggering a death response when we stumble across someone’s core beliefs. When we threaten their core beliefs, we bring the awareness of mortality to the surface. Thus, that’s why we can often see extreme reactions to relatively innocuous seeming ideas.

If those ideas are a part of a person’s core beliefs and they’re disturbed, then the reaction can be quite large. We’ve all encountered “sacred cow” topics with friends and in organizations. These topics are ones we dare not touch because they invariably provoke disproportional responses.

One of the defense mechanisms we have for warding off the fear of death is our self-esteem. The higher our self-esteem, the less likely we are to feel threatened by death or react to the anticipation of pain. Our belief that we have personal agency seems to give us the perspective that we’ll be able to forestall death indefinitely. Martin Seligman and his colleagues described the power of learned helplessness. The more we believe we have control of our circumstances and situation, the greater our hope and the less likely we are to fall into depression. (See The Hope Circuit for more.)

If we want to temporarily avoid the problems associated with a death reminder, we can take steps to build self-esteem. Simple, positive self-talk may be enough to prevent the effects of being reminded of death. Of course, the more durable our self-esteem, the more resilient we are to the effects of thinking about death.

If you want to have the kind of durable self-esteem that will act as a persistent buffer against the threat of death, then one tool to use is to diversify your interests. If you’re the master in one domain when you’re confronted with a setback, your self-esteem will take a serious hit. (See Peak if you want to know how to become a master in one domain.) However, with diverse interests, you’ll find that any single setback won’t seem as large and won’t impact your overall self-esteem as much, and you ultimately won’t be as influenced by thoughts of death.

In Range, David Epstein makes the compelling case for the other benefits of having a broad base rather than a deep expertise. In addition to the self-esteem benefits, it may be more valuable to you personally and professionally as well.

An interesting set of theories have arisen about death and its relatively large importance to early cultures. Many early cultures had elaborate preparations for and ceremonies associated with death. One can point to the pyramids as an example of the huge effort that was expended to prepare pharaohs for the next life. However, these investments aren’t confined to Egypt; other prominent examples include the terracotta army that was buried with Qin Shi Huang. Clearly death was a big production – certainly for leaders but for everyday folks as well.

When you consider the effort expended towards the preparation for the next life and the reality of very little surplus, it becomes clear that death must have commanded a large portion of early human awareness. You can’t spend the effort on preparing for the next life if the thought of death isn’t critically important.

Some of the theories even propose that our transition from a hunter-gatherer existence to an agricultural existence may have been driven by seeds buried with the dead. This gave rise to plants in those locations and ultimately the idea that one could sustain themselves from farming. Of course, alternative explanations are that our transition to agriculture provided for more free time and surplus resources that made elaborate burials possible. Either way, our growth as a human race has been inextricably woven into our concerns of death.

Our proximal – or conscious – thoughts of death are confronted with efforts to push those thoughts from our mind. Its one of the reasons why, shortly after a death, the spouse encounters profound loneliness, as not only did their spouse leave them but, in many cases, the couple’s friends avoid the survivor to protect themselves from their own feelings of loss.

Once pushed below the surface of understanding, the distal defenses are activated. No longer living in a world of rational thought, they prescribe harsher sentences for criminals, more severely alienate those who challenge our core beliefs, and generally manipulate us in unseen ways towards defending ourselves either literally or figuratively.

The more death enters our mind, the more we’re persuaded by the idea of the rich and the famous. Perhaps it’s the belief that they will accomplish immortality in some way that we will not be capable of. Perhaps it’s just the fact that we believe that they’re more confident and therefore more capable of keeping death at bay. Whatever the drivers, we know that we’re more driven by forceful and successful personalities when we’re confronting death. Maybe it’s worth the time to look for your own Worm at the Core to see how it may be shaping your behaviors as well.