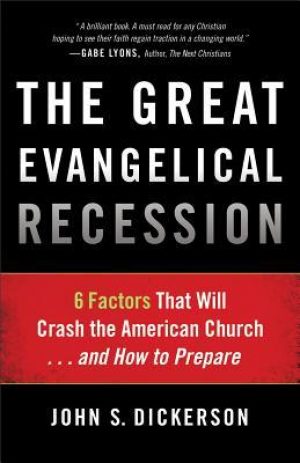 Too many folks I know have decided that the world is going “to hell and a handbasket.” I for one am intrigued by the term and the idea that after centuries of human progress we’re suddenly plunging towards our demise as a society in what amount to the blink of an eye. Rarely does a week go by when I don’t hear about another family torn apart because they don’t eat dinner together. Perhaps it’s the growth of the Internet. Maybe people are texting too much. Maybe we’re not connecting with each other as much socially as was pointed out in the book Bowling Alone. It’s in this context that I read The Great Evangelical Recession. I don’t lead a church. I’m not an elder or a deacon. I’m just interested in the factors that influence our society. Also, I’ve been “standing close” to more than one Christian organization – close enough to see the ugliness that is there and to desire to understand it better.

The Reality of Measurement

Perhaps one of the most interesting things when you look at a book describing the growth – or shrinkage – in the church is looking at what metrics are being used and how those metrics are leading to incorrect conclusions. If big churches are growing then shouldn’t it follow that the church is growing? Not necessarily. Compelling evidence seems to suggest that while big churches are indeed growing, they’re doing so at the expense of smaller churches. The easy to capture data – from the big churches that have the resources to respond to surveys and are large enough to be found –shows growth when there is in reality shrinkage.

It’s a warning to make sure that as we’re picking our metrics that we’re picking metrics that accurately measure what we’re trying to capture. The United States isn’t – despite popular belief – a Christian nation. Evangelical Christians reportedly make up 7% to 9% of the population. More concerning is that even those in this group are in many important ways indistinguishable from their non-Christian friends.

Dickerson says that trees are killed by two things:

I’ve been standing very close to different kinds of diseases inside many Christian organizations. I’ve seen fundamental attribution error (For more about fundamental attribution error see The Advantage, Switch, and Beyond Boundaries.) I’ve seen self-righteousness. I’ve seen legalism win out against love. So while I believe in the Church. I believe in the message left behind to love one another, I’ve seen many examples where this is lost on the machine that is the Christian organizations I’ve been a part of including churches and para-church organizations.

A long lost good friend of me says that churches are hospitals for the spiritually sick. Is it any wonder then that they suffer from the same kinds of challenges and lack of love that all organizations suffer from? It’s sad – but is it any wonder? Knowing that we as a Church aren’t able to heal our hurting members and that they continue to hurt others. One of the things that is said in recovery circles is that hurting people hurt people. We’re tripping all over ourselves hurting each other instead of building each other up and surrounding them with love.

The forces from the outside are important – but in my opinion – they’re not nearly as damaging or influential as we’d like to believe. I’ve read quite a bit about millennials and how they behave and how they think. The conclusion I’ve reached is that there is no conclusion. Some folks say that millennials are radically different than any other group in history. Conversely other studies show that millennials behave fundamentally similar to previous generations – at that time in their lives. So while there are factors that are impacting the church from the outside – they may not be as strong as we may want to believe they are.

When Robin Dunbar came up with a theory which equated the brain mass of mammals to their number of social connections there was more than the simple linear distribution. There’s also the idea that humans need a handful of close – intimate – connections and a larger set of important connections that would cause substantial but not catastrophic impact if they were lost. In the concentric rings around a person there are other levels as well. I believe the furthest in orbit may be the Facebook Friend – that is those people with whom you’ve initiated or accepted a Facebook Friend request. These folks have a connection with you but it’s so light that if they were to defriend you it might take months or years to notice – or perhaps you would never notice they’re gone.

We live in a more isolated world than any time in history – while at the same time being in one of the most connected times. From a communication standpoint we’ve conquered most of the challenges. I can do video calls with a friend quite literally on the other side of the world while simultaneously communicating with other colleagues as well. The Pony Express is a distant memory relegated to history books in a time when messages flow so freely and so quickly. We’ve let go of our requirements for atoms to move from one place to another to communicate we’re now moving at the speed of electrons – and for at least some distances, photons.

Despite all of this communication capability we communicate with each other less deeply than we ever have. We’re forming fewer intimate relationships. We’re building more diverse but less dense networks. The neighborhood communities discussed in Change or Die are all but gone. The bowling leagues and social clubs have given way to Facebook Friends and a much more diverse but more broadly connected set of friends.

The Amish are known for building barns together. We live in an age where getting someone to come over and help us move furniture into the barn can be difficult. If your parents would happen to die – whom of your friends – regardless of how far they live away – would come to support you in your time of loss? Isn’t that one simple way to measure the value of a friend? Isn’t the real standard how far they’re willing to go to support you in your times of need?

As one might expect The Great Evangelical Recession spends a great deal of time speaking about the affront that the church faces. The metrics are public opinion about traditional evangelical Christian values such as gay marriage. In some respects the book reminded me of the movie God’s Not Dead. In the movie Christianity is seen as a weakness by a philosophy professor. The book shares that professors in colleges are confronting the traditional evangelical Christian values.

However, through all of this I kept reflecting on Heroic Leadership and how the Jesuits faced their world differently. They treated their foreign hosts with grace, dignity, and respect. They focused on the essential components of the message. In the Christian context Jesus made this crystal clear – the answer is Love – Agape Love. Complete love for others. Buddhism calls this compassion – love for others. To me it’s all the same message repeated differently.

I can’t help but wonder how things would be different for the 53% of people who held unfavorable feelings toward evangelical Christians if they lived more out of love and grace than out of judgement and hate. (See The Marketing of Evil for more about hating needlessly.)

In the end, the recommendation of The Great Evangelicgal Recession is to focus on love for all others whether they agree with our beliefs or not.

A Different Kind of Church

The vision for the church is different. It’s one where we band together to ward off attackers. It’s a vision where volunteers are the core of the church rather than the paid staff and where workers who have traditionally been paid by the church get secular jobs and spend the rest of their time working on Gods mission. They’re fully committed to Christ and simultaneously living in the world. Whether it comes to pass or not, it sounds like something that Christ would approve of – he was a carpenter and many of the disciples were fishermen after all. Maybe it’s worth learning more about The Great Evangelical Recession.