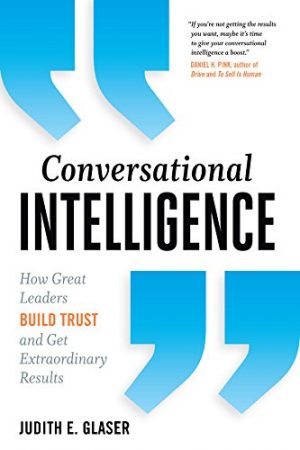 It was a few months ago and I was speaking at a healthy workforce conference. The goal was to improve the conditions for employees in healthcare. I was listening to another speaker on the topic of emotional intelligence, and she strongly recommended Conversational Intelligence: How Great Leaders Build Trust and Get Extraordinary Results, so I picked it up and added it to my backlog. It was interesting because I hadn’t heard of the book before; and I’ve at least heard of most of the conversation, dialogue, and emotional intelligence books.

Before I spend time with the content, I need to share a frustration with Conversational Intelligence. Perhaps it’s just me, but I prefer to approach my work and writing from the perspective best captured in the Isaac Newton quote, “If I have seen further, it is by standing on the shoulders of giants.” Most of my writings are book reviews, because they’re inspired by the books that I’m reading. While I may take large tangents from the book’s material, I want to credit, directly and indirectly, the book for prompting the thinking and the authors as being the giants whose shoulders I’m standing on.

Conversational Intelligence seems, at times at least, to take an opposite point of view. Let me provide one example where I should have seen parallels but instead saw a lack of attribution. The language was too close to be accidental but far enough away to indicate a desire for the ideas presented to be Glaser’s original idea – whether they were or not.

The number of references are curiously short for each chapter and for the book itself. So, while there’s useful repackaging of content in Conversational Intelligence, it’s frustrating that the original “giants” aren’t credited.

Our ability to share intention (see The Righteous Mind) has led to the ability to communicate; ever since, we’ve been building on this firm basis of communication. While communication isn’t intent and it doesn’t allow us to capture a perfect representation of what someone else has in their head, it’s a starting point from which we can develop shared understanding – if we’re willing to put in the work.

When considering how other books speak of communication, I was struck by the realization that nearly every book that I read places communication in a position of prominence. This is obvious in books with titles like Crucial Conversations; but communication is a thread that runs through the heart of nearly every book on leadership and management. Kotter spends a great deal of time in Buy-In discussing how to communicate with people who might block a proposal. More subtly, The Science of Trust focuses on simple communications strategies that couples can use to have better relationships and reduce their chance of divorce. The Dance of Connection talks about conversations as a way that we make connections with others.

All of this leads to the same place that Conversational Intelligence is going. That is, we want to have a real dialogue with people. (An excellent discussion of the distinction between communication and a true dialogue is available in the book Dialogue: The Art of Thinking Together.) Conversational Intelligence speaks about dialogue as the natural outcome of high trust. While I don’t believe that high trust necessarily creates dialogue, I do believe it’s a prerequisite.

Trust is in and of itself a difficult topic to nail down. Trust and Betrayal in the Workplace and Building Trust: In Business, Politics, Relationships and Life have two different approaches to breaking down the components of trust. Both have merit, as I discussed in Trust => Vulnerability => Intimacy. However, more interesting than defining trust is exploring the impact that it has on societies. The degree of trust and the relative trust between different groups has a profound impact on the ways that societies develop, as discussed in Trust: Human Nature and the Reconstitution of Social Order.

At an individual level, it’s trust that drives the capacity for vulnerability. At a societal level, it removes the friction associated with distrust. Contracts are easier and conflicts are quicker to resolve. Conversational Intelligence speaks of levels, with the lowest level being “ask and tell”, Level I, associated with low trust, progressing to Level III high trust, which Glaser calls “co-creation”.

Glaser provides a five-step model for building trust – which I’d argue is more about deep communication than the development of trust. My paraphrasing of the model appears below.

The development of trust does more than lubricate conversations and develop our societies. It changes our brains and our bodies as well.

The impact of stress on our bodies is the focus of Why Zebras Don’t Get Ulcers (see my three-part review: The Causes and the Cure for Stress, The Physical Impact of Stress, and The Psychology and Neurology of Stress. Much of stress is driven by our lack of trust – in others and in our environment. The release of cortisol (a stress hormone) can live in our bodies for 26 hours – and come back each time a stressful situation is “replayed” with a new person. We can quite literally keep ourselves in a state of anger and aggression and stress – if we choose to.

The long-term impacts of this stress have been shown to reduce the average lifespan. Literally, folks are stressing themselves to death because they don’t trust the people around them. Given that trust is a choice, choosing situations where trust isn’t an option or choosing not to trust isn’t good for your health.

Conversational Intelligence has many mnemonic acronyms as tools for having better conversations. One of them is STAR: Skills That Achieve Results. Specifically, the skills being referred to are:

These skills are reminiscent of the skills that Motivational Interviewing uses. It reflects the knowledge that the best therapists have when they’re trying to get into deep conversations and create alliance. (See The Heart and Soul of Change for more on alliance.)