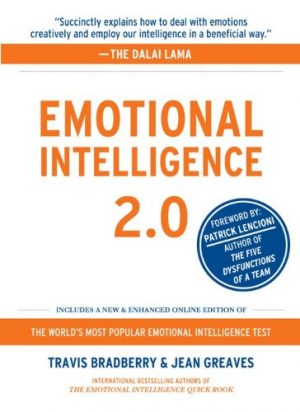 There have been many references to Emotional Intelligence 2.0 in my world over the past several years, but they hadn’t managed to break through and cause me to read it. I had read Daniel Goleman’s Emotional Intelligence some years ago and it had stuck with me. In the intervening six years much of what I struggled to process became clearer. I added input from others, studied Buddhism, and worked on better understanding neurology. The problem wasn’t that Daniel Goleman didn’t have it right or that he didn’t understand it. The problem was that the content wasn’t very accessible.

The fundamentals of emotional intelligence are two dimensions:

These form a 2×2 matrix of self-awareness, self-management, other awareness (called “social awareness”), and other management (called “relationship management,” since you don’t really manage others, you manage your relationship with them). The model is the same one is used in Emotional Intelligence.

Individually, the strategies are not particularly profound. Most of the strategies we’ve heard before and have implemented at some level. However, what is profound is having a catalog of things to try when you’re trying to get better.

Much like Strengths Finder 2.0, Emotional Intelligence 2.0 comes with a code, so you can take a free test to evaluate your emotional intelligence. The test has 28 questions, in which you’re asked to rate each statement for whether it happens never, rarely, sometimes, usually, almost always, or always. From this, scores are created in each of the four categories as well as an overall score. Unlike Strengths Finder 2.0, the scoring is relatively trivial to see. There are a handful of reverse-scored items (where never is the best answer), but, mostly, the idea is you would pick always to get your perfect score.

This is a problem for me, since, once you reach a level of self-awareness and maturity, you’ll not rate things as always or never. In my review of Dialogue (speaking of The Inner Game of Dialogue), I recounted a quote from Richard Moon, an aikido master. “It’s not that the great masters of Aikido don’t lose their center, it’s that they discover it sooner and recover it faster than novices.” Even the Dalai Lama admits in his writings and conversations with others that he’s not perfect at his emotional intelligence. His work to be more connected with himself and others is something that most of us couldn’t do – and yet he remains a student and a practitioner. (Practitioner in the sense that he’s still practicing.)

So, while the test may be able to provide you some direction on what strategies you could employ if you find that you struggle with a particular aspect of emotional intelligence, I was frustrated with the lack of precision on the high end of the scale.