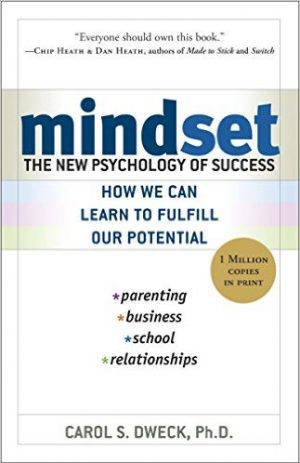 Criticism. Everyone hates it. Or do they? People talk about constructive criticism and somehow that doesn’t make any sense. How can criticism ever be constructive? Isn’t criticism by definition critical? Isn’t it rejecting someone or what they can do? Maybe you’re on the opposite end of the spectrum and feel like most criticism is – or at least can be – helpful. In Carol Dweck’s book Mindset, she isolates one critical aspect of the way folks view themselves, and others, to help describe why we might see criticism differently.

The core assertion is that people either see themselves (and by extension others) as a fixed-unchangeable quantity or as a fluid changing organism that learns from the world around them and their experiences.

The world tends to talk about “talent.” Oh, Mozart was so talented. That soccer player, or dancer, or painter, etc., has so much natural talent. We think that you’re smart or dumb. You believe you’re either good at math, or writing, or something else. But wait, if you go back and look at the truly great geniuses in their respective fields most of them didn’t show any natural talent. They were relatively uninspiring figures in their childhood. Einstein wasn’t a spectacular student. In nearly every example the leaders were downright ordinary. What changed them was their intentional practice. The change was a result of their “hard work” to become better than they were.

I say “hard work” because most wouldn’t describe the work as hard. Most would say that it was a rewarding learning experience. Mihaly Csikszentmihalyi (from Flow) interviewed Nobel Prize-winners and other creative leaders in different fields who often said “You could say that I worked every minute of my life, or you could say with equal justice that I never worked a day.” Part of this is a result of the psychological state they end up in – what Mihaly Csikszentmihalyi’s book Finding Flow is all about.

This is the change mindset. It’s an awareness that you can change and become better than you are.

I remember one of the pivotal days in my life. I was in elementary school and were having some sort of competition for math, reading, etc., I remember that I was told a haunting thing – that I had potential. Ouch. It didn’t fully sink in at the moment. It took weeks. I could have been told that I was a good kid, a bright student, destined for greatness but I got “potential”. The problem with this is that someone with potential has to take responsibility if they don’t do something great. You have to work to fulfill your potential. If you’re “good”, “bright”, “talented” you don’t have to work. This moment has served me all my life. Realizing that my life is what I make it. All based on a single word.

You can imagine my confusion later in life when talking with friends they couldn’t understand how I reacted to criticism and hardship. It’s a funny thing – even to me – that I can hear the criticism of something I’ve done and both value the person that it comes from – and not take it personally. It’s not that it doesn’t hurt at times but how I choose to deal with it is different than some others. Generally I’d convert the criticism into anger. Eastern philosophies believe that anger is disappointment directed. I directed the disappointment internally. I would then use this “emotional fuel” to drive change in myself. Whether it’s building adaptive behaviors to handle folks who are the most detail oriented or whether it is coping behaviors for some of my friends who are hopelessly late for everything. The thing is that while I remain an imperfect being I at the same time realize my flaws (or at least some of them) and I get frustrated and angry with them so that I can change them.

Most of the truly inspiring folks that I know – the people I look to for my source of direction and wisdom – see that everyone is capable of change and becoming better than they are today.

If you’re feeling “stuck” by your job, your career, your family, or your spouse, I’d highly encourage that you seek out a Mindset of change.