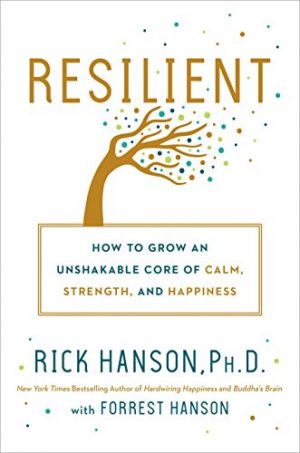 Our human lives are filled with volatility, uncertainty, complexity, and ambiguity. We face a variety of threats that we can see and those we cannot. Living in this world can make you aware of your need to become resilient. Resilient: How to Grow an Unshakable Core of Calm, Strength, and Happiness shows you how to move closer to being undisturbed when the challenges of life come your way – as they invariably will.

This isn’t the first book of Rick Hanson’s that I’ve read. The last time I was introduced to his work was through Hardwiring Happiness. While Hardwiring Happiness was focused on accentuating the good parts of life, the focus in Resilient is how to weather the storms of life. Much like you’d prepare for a storm in the real world, Hanson explains how to weather the emotional and thinking storms that come through life.

My previous readings on resilience include Angela Duckman’s Grit: The Power of Passion and Perseverance, Martin Meadows’ Grit: How to Keep Going When You Want to Give Up, and Nassim Taleb’s Antifragile: Thinks that Gain from Disorder. The first two describe grit as a sort of power or characteristic that people leverage towards their goals. The third explains that things can either be reduced or increased because of strain. There is post-traumatic stress disorder and post-traumatic growth as well.

Certainly, these cover aspects of the same topic that Hanson addresses with Resilient – but there’s a radically different approach. Where there is a force behind grit and being antifragile, there’s a peace behind resilience. Instead of having the strength to overpower the storms as in karate, resilience simply defects the slings and arrows of life. It’s not that you don’t need the skills that are shared in Duckman’s Grit, Meadows’ Grit, and Antifragile, it’s just that they’re not enough. You must know who you are and what you stand for.

I first wrote of centering and the ability to weather storms in my review of Dialogue. I revisited it in a post on How to Be Yourself. However, the topic of having a clear understanding of who you are shows up as the need for an integrated self-image in Rising Strong Part 1, Schools Without Failure, Compelled to Control, Beyond Boundaries, and The Power of the Other.

In the inner game of dialogue, this concept is described as centeredness. Dialogue quotes Richard Moon, an aikido master, as saying that it’s not that the great masters of aikido don’t lose their center, it’s that they discover it sooner and recover it faster than novices. Resilience flows from this centeredness, from this stable core, like water from a spring.

Most of the time, we’re only peripherally aware of what is happening around us. Barry Schwartz in The Paradox of Choice describes filtering as the basic function of consciousness. We’d never be able to function if we were consciously processing everything happening around us. Being mindful is learning to look at the filter and tune it differently. At any given moment, you’re being bombarded with internal functions like breathing rate, heart rate, temperature regulation, and muscle status. We pay attention only to a small part of these, because to pay attention to everything would be exhausting.

Being mindful is like being able to shine a light into the darkness that we rarely see. It’s a way to illuminate the inner world of ourselves – and the outer world of other.

Being mindful helps us to accept reality as it is – not as we want it to be. People who are mindful are willing to challenge their assumptions about the world and examine how their expectations of the world and the actual functioning of the world don’t match. Gary Klein explains in Sources of Power and Seeing What Others Don’t how we do mental simulations, and when our mental models’ expectations are violated, how we need to reevaluate them and the decisions we’ve made based on the false expectations.

By being aware and accepting of reality, we are less caught off guard when our perception clashes negatively with reality.

One of the concepts in Buddhist tradition is the concept of detachment. That is, one should not get wrapped up in anything too tightly. This is particularly true of our perceptions. If we get too wrapped up in the idea that the way we see the world is the way the world really is, we become blind to the possibility that we’re wrong, with often tragic consequences.

Too often, we become attached to the outcomes. We expect life to react like a formula, where if we do our three steps, we should receive the reward of the outcome we would like. The unfortunate reality is that this isn’t the case. The world is much more probabilistic than we would like to believe. (See The Halo Effect.) We aren’t as great as we would like to believe ourselves to be. There are no guarantees in life. The more we become attached to the outcomes, the harder it is to become resilient. The more we disconnect from the outcomes and accept that we did the best we can regardless of the outcomes, the more resilient we become.

The truth is that we only have control of our behaviors and what we put out in the world. We make the offering, and others must either take or leave that offering based on where they are and what they’re capable of. Sometimes, what we do and what others do plus the influence of non-human actors will result in success – and other times it will end in failure. Where it lands, we don’t control. That’s why we need to be detached from the outcomes.

My favorite movie scene is from The Matrix, when Neo stops the bullets, picks one out of the air, looks at it, and drops it. It’s for me an understanding that others can fire bullets or throw daggers at you, but you don’t have to accept them. Resilient tells the story of two darts from Buddha: “The first dart is unavoidable physical or emotional discomfort and pain: a headache, the cramping of stomach flu, the sadness at losing a friend, the shock at being unfairly attacked in a meeting at work. The second dart is the one we throw ourselves, adding unnecessary reactions to the conditions of life and its occasional first darts.” In other words, the pain that is caused sometimes has as much to do with our reaction as it did with the original pain or discomfort.

That’s easy to say when you’re not in fear. It’s easy to say when you don’t feel your pulse quickening and your face flushing with higher blood pressure; but how do you get there? The answer is in the math equation that’s done to determine whether fear is warranted. It’s not math exactly, but there is an evaluation that happens. Is the perceived threat greater than the resources that I have available to deal with the threat? The more resources you perceive yourself to have, the less likely you are to believe that the threat will exceed your capacity, and therefore the less likely you will be in fear.

I mentioned in my reviews of Mindset and Choice Theory the idea that some eastern philosophies understand anger is disappointment directed. Fear is similar – but slightly more complicated – in that it’s the perception of threat as compared to the perception of resources. You can reduce fear by reducing the perceived threat – which is particularly difficult to do – or you can increase your perceived resources.

Ultimately, to be resilient, you may find that you need to build your resources, and the best way to do that is to extend to yourself the same compassion that you would extend to others. You can learn to accept that you’re not perfect. You can learn to have loving kindness for yourself as well as others.

One first step towards compassion for yourself might be in finding ways to reduce your fear by resourcing yourself. Reading Resilient will give you a set of resources to avoid fear and have compassion for others as well as yourself.