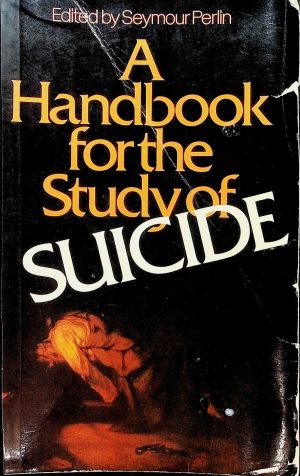 One of the most interesting challenges with suicide is figuring out how to study it in a way that leads to better assessments and better interventions.  That’s the heart of A Handbook for the Study of Suicide: learning more about suicide to address assessment, intervention, and useful models.

Views of suicide have changed over time – and they vary by culture.  At various times, suicide to maintain one’s honor was approved by both Greeks and Romans.  But the stories aren’t that simple.  Suicide by slaves was discouraged, because it was essentially stealing property from the master.  In at least one culture with polygamy, wives would compete to be slain and buried with their husband.  The wife who was determined to be the one the husband most loved “won the honor.”

In Italy, suicide was only punishable for three classes of people: criminals, soldiers, and slaves (criminals primarily because it was seen as an attempt to escape punishment).  The criminalization of suicides was one attempt to discourage suicide.  Other attempts were various desecrations of the body, including being dragged naked through town.  They might also be prevented from a burial with standard religious ceremonies.

Other desecrations, such as being pinned down at a crossroads, were an approach to preventing the spirits of those who committed suicide from haunting the living.

If you look at various religions, you can find evidence of some poor choices – for instance the Shakers.  If you’re not interested in procreation, you may find your movement is short-lived.  Similarly, if suicide is too appealing, then you’ll have no one left.  Christianity promises an afterlife that vastly exceeds anything that someone could expect in this life, thereby making death a doorway to something better.  Suicide was simply walking through that doorway.

This became a problem for the early Church, and therefore suicide became progressively associated as a sin until about the last half century.  The arguments that were made associating suicide as a sin varied from the fact that our bodies are temples to associating #6 on God’s Top Ten list, “Thou Shall Not Kill,” to suicide.  Over time, scholars have unwound the foundations for suicide being a sin, and instead suicide was transformed into a weakness or mental illness.

The logic is circular.  Only a person with a mental illness would consider and complete suicide, so everyone who does die by suicide must therefore have a mental illness.  Certainly, the model isn’t literal.  More comprehensive thinking about what’s happening in the mind of the suicidal person can be found in Why People Die by Suicide (Joiner), Man Against Himself (Menninger), and The Suicidal Mind (Schneidman).

Old conceptions that suicide was mental illness give way to the idea that people choose suicide because of the pain they’re experiencing (psychache) or because the forces of desiring life and desiring death tip towards desiring death – without extinguishing the desire for life.

When Suicide is Right

In my own life, my grandfather took his own life when he decided that his health was failing and he could no longer have the quality of life that he wanted.  While I miss him, and it was sad that he is gone, I accept that he had reasons for deciding that he was done.

Suicide is a choice – whatever we may think about it, it’s a choice or a decision.  It’s a decision that, of all the options, suicide is the one that seems the most appealing.  However, in all but in a few situations, the right answer isn’t suicide.  So how is it that people believe it’s the right answer?  Part of that comes with the awareness that suicidal people are victims of constrained thinking.  (See The Suicidal Mind.)  Part of the answer may come from a failure to make rational decisions.

Irving Janis and Leon Mann wrote Decision Making back in 1977, and it’s where Janis’ term “groupthink” was popularized.  In this work, we discover the processes that people can use to identify the best alternatives and make rational decisions.  However, Gary Klein’s work, as documented in Sources of Power, helps us to realize that few people use rational decision making.  Instead, he explains, they use recognition-primed decisions that are based on their previous experiences.  Thus they lean on their experiences as much as or more than they try to logically work out what the real options are.

Suicidal persons often become fixated on the one option of suicide to the exclusion of other viable – and even better – options.  Schneidman explains that “only” is the four-letter word of suicide.  (See The Suicidal Mind.)  If we want to reduce suicide, we need to find ways to reduce this fixation, increase skills for finding alternatives, and help people see that there is always hope while you’re alive.

We don’t steal or loot others’ businesses.  (Or at least most of us don’t.)  The rules of society govern our actions, and even if they’re not fully able to constrain them, they certainly influence them.  How Good People Make Tough Choices is quick to point out that there’s a categorical difference between truly moral temptations and ethical dilemmas.  In the first case, we know what is right – as defined by what society expects – and in the other, we’re balancing multiple foundations of morality that are in conflict.  (See The Righteous Mind for more on the foundations of morality.)

Suicide rates are influenced by the social context and constraints that surround it as is evidenced by the fact that they vary so widely between different countries.  There’s something to the way society is formed that can either encourage suicide or provide insular protection against it.

Why does a breakup drive one person to suicide but barely phases another?  Why is job loss so traumatic for some and uneventful for others?  If the external event is the same, why aren’t the results the same?  The answer comes in the way that we view the situation.  Our reactions are based primarily on the internal meaning that we assign to the event – not the event itself.  Richard Lazarus in Emotion and Adaptation makes it clear that stressors are not stress.  Our belief about the probability and impact both play a role in our assessment but, critically, so does our belief in our capacity to cope.

Even highly likely and largely impactful events barely register when there are high degrees of self-esteem and internal locus of control.  (See Deci’s work in Why We Do What We Do for more.)  The difference in reactions is therefore about the assessments and capacities – which we can train and instill in people.

The Road of the Gypsy

One of the other interesting findings is that immigrants have a higher rate of suicide than those who are native born to a country.  The cause isn’t known, but it does seem as if those who travel the road of the gypsy are more prone to believe that there’s a magical place where their frustrations with life will be removed.  As Viktor Frankl explains in Man’s Search for Meaning, sometimes these false hopes can be deadly.  It isn’t, however, false hope to believe that you can learn something from A Handbook for the Study of Suicide.