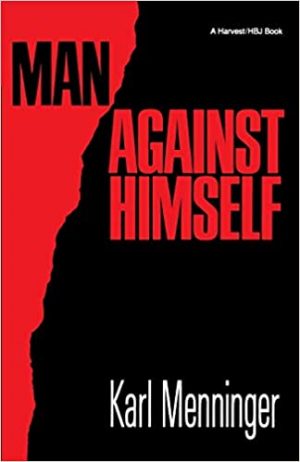 One of the things about researching suicide is you get the very real sense that it’s somehow an internal conflict that boils over into an act of self-aggression.  It’s this very real consideration that leads to Karl Menninger’s 1938 classic book, Man Against Himself.  In it, he seeks to expose his experiences with people who choose to harm themselves – through suicide and other ways.  His belief is that our best defense against self-destructiveness is to bravely expose the inner thoughts of those troubled souls who choose self-harm so we may design interventions against them.

The High Cost of Living

For those who are in constant psychological pain, each day of life is purchased at great cost.  Every day weighs on them more heavily.  It’s these costs that we seek to reduce or eliminate and replace with sources of strength and resources that make them feel as if things are continuing to get better.  However, sometimes our efforts come too late, and people feel the weight of the deficit they’ve been running for so long.

Most of us can’t understand these burdens directly.  Nor can we seem to engage the broader public into the appropriate consideration of the factors that lead to suicide.  We find that suicide then – and now – doesn’t get the kind of attention it deserves.  Instead, we continue to ignore that living can extract a high price for those who are suffering.

If the pain is visible and external, it could be said that suicide remains a heroic death.  It’s the conquering of the forces of life and death that conspired to imprison the suicidal person.  If the torture is internal and invisible, then the suicidal person must have been crazy.  This view is prejudiced and dismissive of the power that our thinking has.  It invalidates psychic pain.  (See The Suicidal Mind for more on psychache – psychological pain.)

The truth is that all suicide is composed of both parts – the visible and the invisible.  We know of invisible things that are no less real because they’re invisible.  We can’t see magnetic fields, but we know they exist.  Most of us have never personally seen a pathogen – whether it be bacteria, virus, or spore.  That doesn’t stop us from becoming infected by them.  Despite our desire to be able to see and understand, we must accept that sometimes we’ll not know what the factors were and whether they were truly internal or if there were unseen external forces at play.

Menninger proposes that the actual suicide attempt has a long prelude.  The decisions and thoughts that preceded the attempt led to the conclusion.  I struggle here, since the data about whether suicide is preplanned or not is inconsistent at best, with some people seeming to plan out an elaborate event and others seemingly impulsively deciding that the time is now.

That being said, I can acknowledge that many of the seeds of suicidal thought are sown years before.  Just as Dr. Spock learned decades later that his advice to parents may not have been as good as he initially thought, it’s possible that seemingly innocent comments and perspectives led to unhealthy and risky attitudes.  (See Finding Flow for more on Dr. Spock.)

Menninger relates several stories where thoughts that occurred in childhood came to be revisited as a specter in the future.

Crime doesn’t pay.  It’s a cliché that was broadcast to all of us in an attempt to reduce the desirability of a life of crime, but the fact that we need the cliché is an indication that this isn’t obviously true.  We’ve internalized somehow that all crimes must be punished – whether or not anyone else sees it.  In some ways, people pursue self-punishment as an atoning sacrifice before others could possibly implement sanctions against them.

Generally, the pull towards self-punishment is in a normal band and it keeps good people on the right track.  (See How Good People Make Tough Choices for more about this mechanism.)  For some, there seems to be no atoning for their perceived sins.  They’re angry at their mother; when she dies in an automobile accident, they blame themselves for her death.  There are no amounts of self-punishment that can compensate for this supposed injustice.  Never mind the fact that no amount of thinking about harm towards another person actually harms them until and unless it is acted upon.

For the suicidal person, it seems as if there’s always another infraction or injustice that must be atoned for, and some of those are so large that there is no way to pay the debt without sacrificing their own lives.  Our conscience “is a strong deterrent and a harsh judge.”

Enmeshment describes identities of multiple people that are mixed, confused, and fused.  At the extreme, it’s pathological and creates a number of problems.  In its normative state, we all believe that we carry a part of someone else inside us.  We hear the words of our parents, our coaches, our former bosses, etc.  This can be comforting for survivors, because they can believe they continue to carry a part of the suicide victim with them.

However, for those who have pockets of extreme hate, it may create the opening thoughts need to provide a path towards suicide.  If I’m angry at my father, and I kill myself, I somehow kill that part of him that I carry inside of myself.  This isn’t the most direct or bulletproof logic, but it’s often all that a suicidal person needs to push them across the chasm.

One of the quirky parts of suicide is that it is seen in people who are the recipient of sudden fortune as well as those who are subject to the expected misfortune.  This discontinuity can be explained by a sense of impostor syndrome and the belief that you don’t serve the recognition or positive results that you’re getting.  (See The Years That Matter Most for more on impostor syndrome.)  It denies your reality, and you believe that you can’t find a way to be seen as you see yourself.

The disconnect can lead to a sense of invalidation not just of self-perceptions but of the entire self, and this intensely conflicted state may drive the apathy that’s necessary to create the conditions for suicide.

Get Down or I’ll Shoot

A man is standing at the edge of a bridge considering jumping off as a form of suicide.  The police officer shouts, “Get down or I’ll shoot,” and the potential suicide attempter calmly steps down.  What kind of sense does that make?  Well, the kind of sense to be effective in a world of potential suicide.  Somehow, jumping off the bridge to your death could be okay, but being shot by a police officer is not.  Conversely, there are some people who choose “officer-assisted suicide,” deliberately provoking the police so they will be shot and killed.

There’s weird logic that works inside suicide, including the unescapable fact that many who attempt suicide and are critically injured (but are not dead) plead for assistance and reassure those helping them that they want to live.  Some will eventually die of their injuries, and some will not.  This only confirms the perspective that suicidal people are not singularly focused on death but are instead caught between the desire for life and the desire for death.

Sometimes, parents or other authority figures label people.  Little girls are told about their “lot in life,” which must be submissive.  Black Americans are told that they’re inferior – even by their own parents.  The result is that sometimes they sow the seeds of later internal angst either because the person achieves more than what their self-image allows them to accept – or they aren’t successful, and as a result, they believe that they’ll never accomplish anything with their lives.

Tell a girl that she’ll be dominated by men, and she may just seek out precisely the kind of men that will make that label truth.  This is, of course, not what you want.

The Tragedy of Alcohol

At one point, the concern for alcohol was the DTs – delirium tremens.  However, as Menninger explains, he maybe saw one case a year.  The damage that alcohol does is not so much physical as it is psychological.  Sure, there are liver and physical issues – but those are not the most important ones.

The important observation he makes is that he’s been unable to identify the line between casual, social, and acceptable drinking and the point which it becomes an addiction.   That may be because that it is indeed gradual.  Addiction is a coping mechanism that gradually gains control over you instead of you over it.

Alcohol starts as an escape from the problems – but ultimately becomes a much bigger problem.  While it may, for a time, provide a justification for unjustifiable behaviors, ultimately people lose patience and see alcohol as the problem – instead of the solution.

It’s Okay, If They Let You

The big story of my time was the “chase” of O.J. Simpson’s white Ford Bronco on the California freeway and the trial that followed. “If it doesn’t fit, you must acquit.”  For most, the belief is that he got away with murder.  Though he never did admit it, the perception is still the same.

At some level, we continue to be shocked that people who have money, prestige, and power commit crimes – and are never charged.  Ultimately, the same behaviors that would result in prison time for the rest of us is somehow okay, because they’re special and different.  The problem, as Jerry Falwell, Jr. found out, is that you can’t betray the central images that allows you to maintain that power and prestige, or it will come crashing down.

Instead of a balanced view of both positives and negatives, there’s the irrational magnification of the often-insignificant limitations.  It’s these insignificant things that often pits Man Against Himself.